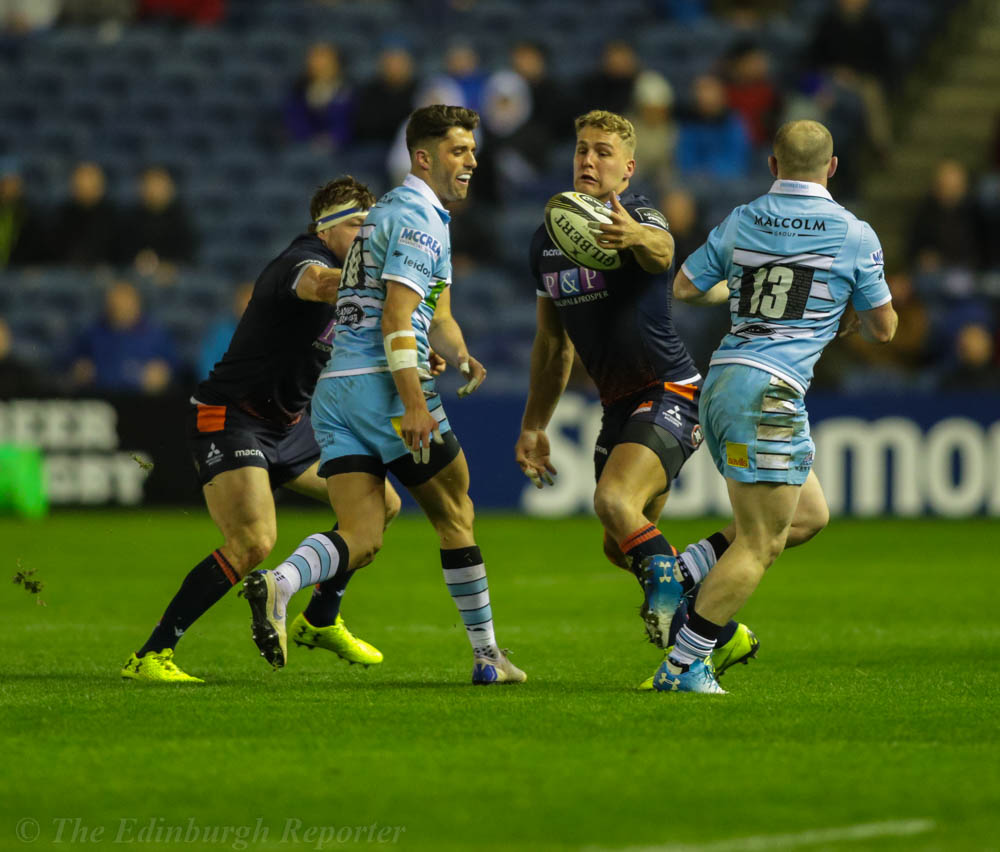 Glasgow Warriors made their traditional, late December trip along the M8, on Saturday, to play Edinburgh Rugby in the first round of the, three match, 1872 Cup at BT Murrayfield. The fixture was also a Guinness PRO14 cross-conference match and the first of a Christmas and New Year double header for the sides.

With the smoke from the fireworks still hanging in the air, Edinburgh kicked off and, almost immediately, the match was stopped to attend to a couple of players who had clashed in the air trying to gather the ball and had then hit the ground fairly hard.

With the incident cleared up – the players were just winded – the teams returned to the fray and Edinburgh began their dominance of first half possession and territory.

Glasgow had to endure almost 10 minutes of relentless attacking deep in their own half with Edinburgh’s ball carriers blasting through the first line if defence several times. Relief for the visitors, if it can be called that, came in the form of a 10th minute penalty for the home side which saw Jaco van der Walt slot home his first successful kick of the night. *The visitors then enjoyed an all-too-brief period of possession, but ended up kicking for territory, before regaining possession following Blair Kinghorn’s clearance.

They started again in at the defence, but their attack ended – to paraphrase the great Arthur Montford (look it up kids) – in ‘disaster for Glasgow’ when a short, pop-pass from Adam Hastings to his outside centre, Nick Grigg, was plucked out of the air by Edinburgh’s Duhan van der Merwe. *The big winger then had nothing else to do(!) but sprint the 75, or so, metres to the Glasgow try line for the first try of the match. Van der Walt then slotted the touch line conversion home for 10-0 after 13 minutes of play.

During the following 10 minutes, Glasgow enjoyed more possession, but could not find a way to break down Edinburgh’s defence, eventually losing the ball to a knock on and starting another round of pressure from the home side.

Once again, their defence managed to hold out, but at the cost of another penalty, successfully kicked by van der Walt for 13-0 with 22 minutes of the match played.

The remainder of the half was fairly even, with the visitors possibly just having the edge, but inroads were hard to come by. Their first, really threatening visit to the Edinburgh 22, as the half was drawing to a close, ended with them once again, losing possession to a handling error.

However, a touch of magic from, potential Man-of-the-Match, (Edinburgh’s Duhan van der Merwe walked away with that) George Horne, with a couple of minutes left meant that Glasgow had some points on the board before the break.

Once again, pressing at the Edinburgh line, Horne spotted that the defence was quite shallow and lobbed a soft kick into the area which his inside centre, brother Peter, ran onto to touch down under the posts.

There was a short intermission while the TMO checked for off-side or a knock on, but all was good and Hastings chipped the conversion over to send the teams into the tunnel, 13-7 to Edinburgh.

For the first 10 minutes of the second half, Glasgow kept the ball and gradually worked their way up to, and into, Edinburgh’s 22 with the play largely driven by the younger Horne brother. But, once again, handling let them down and Edinburgh were able to clear.

Another successful Edinburgh penalty in the 55th minute from van der Walt kept the score ticking along at 16-7, but the lead was stretched again soon after with another van der Merwe, intercept try.

In a deja vu moment for Glasgow’s back line, another poorly considered pass from Hastings was, once again, latched onto by the winger and, once into his stride, there was no stopping him on his, slightly shorter this time gallop for the line. Van der Walt then followed up with the conversion for a healthy 23-7 lead with around 20 minutes left.

The usual, last 20 minutes, raft of substitutions, did nothing much to change thing, but Edinburgh did seem, apart from a couple of solo efforts, to be content to sit in and defend.

The match drew to a close with Glasgow encamped on the Edinburgh line, enjoying a string of fairly innocuous penalty awards, before it all became to much and an attempted repeat of their only try came to naught as the lob over the defence was knocked on in the goal area, summing up the visitors only visit to BT Murrayfield this season.

And, with Edinburgh coming away with a well deserved 23-7 win, they now take a 16 point advantage into Round 2 of the 1872 Cup next week in Glasgow.