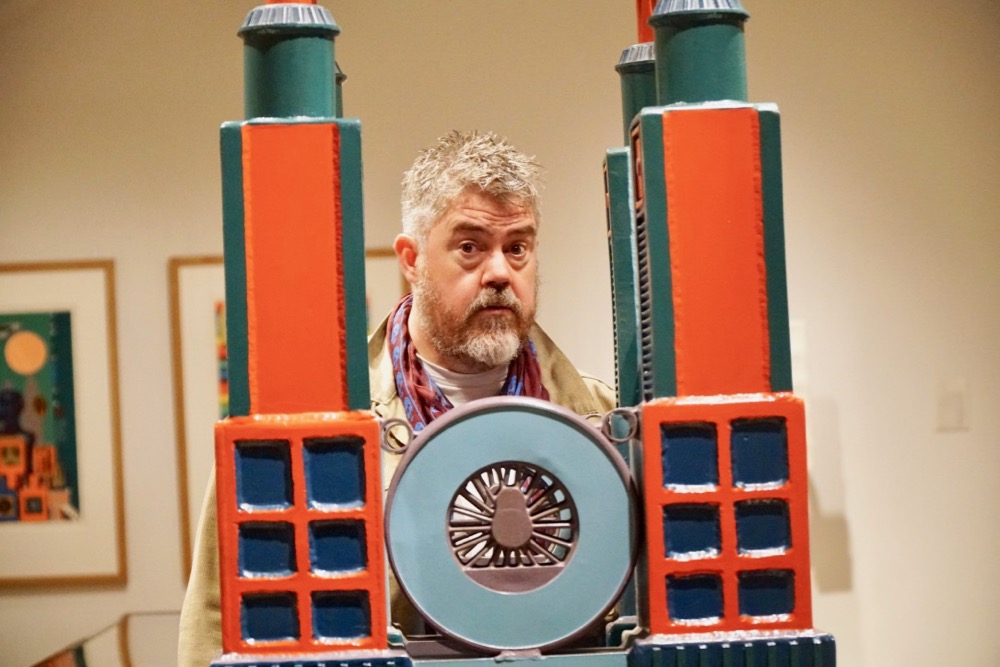 Entertainer Phill Jupitus is now a bit of an Edinburgh fixture himself. It is great to see Phill who is such a well known TV and radio presence, having made himself at home here.

As someone who has adopted Edinburgh as his own, it is perhaps only fitting that with artistic talent at his own fingertips, he has become a real fan of Edinburgh’s Eduardo Paolozzi who features in the new exhibition at Modern Two.

And he has no problem telling me that he is adamant that the three Monte Cassino pieces must return to St Mary’s Cathedral after their brief sojourn in London Road Gardens.

Phill explained how that happened. He said : “I suppose having spent so much time in Edinburgh, I suppose he gradually, insidiously wound his way into my heart.  Going to Broughton Street down from North Bridge down the hill, I always walked past the three statues by the Cathedral, the Monte Cassino pieces which now are in London Road Gardens.

“They had better come back!

“I suppose it comes from seeing them and wondering about this guy who made them, seeing his name every day on the side of the pieces, added to the time I have spent in this gallery. His name just keeps coming up again and again. Then sitting in the café at Modern Two having a cup of tea under the Giant Metal Man, Vulcan, where even the ceiling panels above are made by Paolozzi. He is a man who was an extraordinarily globally significant artist but he was Edinburgh through and through.

“Scottish-Italians are such an important part of the culture of Scotland and for one of their most famous sons to be in Edinburgh making this extraordinary work that we are in front of today – his collages –  these colours, I love them.

“To be honest in all of his work, be it the print making or the sculpture, he is a collage artist. He is taking disparate elements and making them. That is a result of the fact that he was a fan boy of Dadaism and Surrealism. That is what they did reappropriating and changing existing images. I think that ran through him.”