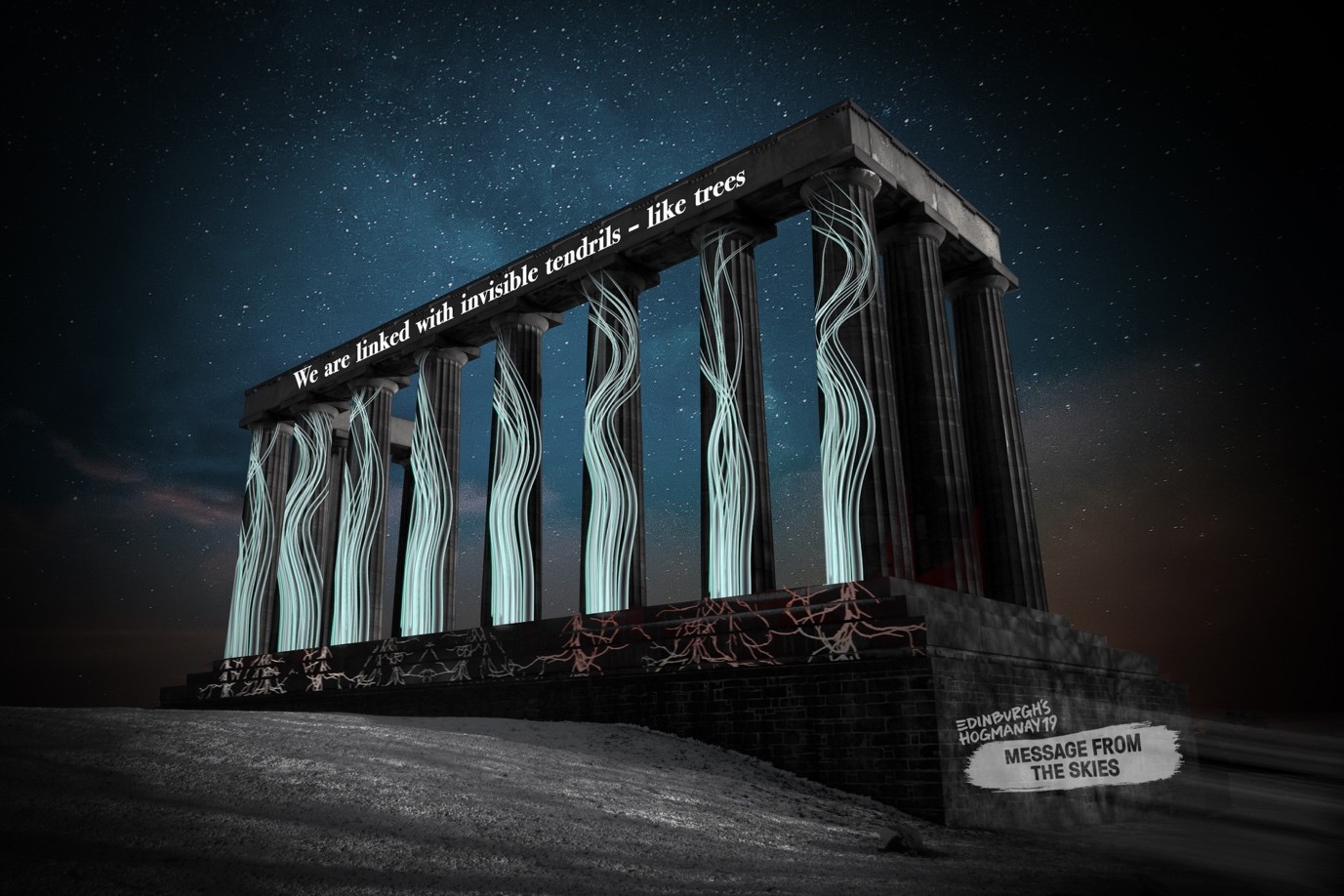 Returning after its debut last year Message from the Skies will light up the city centre in January when things go a bit flat after Hogmanay. The idea is that ten Scottish or Scotland based writers, artists, designers or musicians will write a love letter to Europe.

The words will then be projected onto buildings in the centre of the city which was the first UNESCO City of Literature. There is a definite political message with this as it may be the year that the UK leaves the EU, depending on events at Westminster this coming week.

Message from the Skies is a free event presented as part of Edinburgh’s Hogmanay 19 which leads with a passionate celebration of Scotland’s shared cultural, historic and social connections with Europe.

Last year one writer, Val McDermid was commissioned by Underbelly who produce Edinburgh’s Hogmanay for The CIty of Edinburgh Council to write the content for the first Message from the Skies.  McDermid highlighted women writers such as Muriel Spark and Susan Ferrier, and you had to walk around the city to unveil each new ‘chapter’ with the use of an app.

This year there will be six writers across six sites – Leith Library, Bongo Club in the Cowgate, The National Monument of Scotland on Calton Hill, Tech Cube at Summerhall, Leith Custom House on the Shore and Tron Kirk in Hunter Square. Working with Suzy Glass, each writer is collaborating with visual artists, projection artists and composers – a total of 16 creatives – to bring their letters to life and writ them large on the walls of Edinburgh.

Each writer has written a love letter to Europe marking Scotland’s shared historic, social and cultural connections with this family of nations in a creative response to the context of our times.

Guardian columnist and author, Chitra writes a comment piece about her childhood in London, holidaying in Spain, moving to Edinburgh as an adult, discussing her identity as a second-generation immigrant in the UK and in Europe.

Daniel Warren will work with archive and live action footage to tell Chitra’s story; the film will have an accompanying track composed and performed by Emma Pollock.

Bulgarian born, Highland based travel writer Kapka writes about the origins of Europa, touching on deep time, mythology and legend. She explores how Europe is more permanent and enduring than detailed political ideas that dominate our everyday world.

Founded by Susanna Murphy and Cristina Spiteri, Bright Side Studios is creating images from Kapka’s writing which come into focus before dissolving into nothing. Pippa Murphy brings together a soundtrack which fuses her music with found audio inspired by ancient Greek, Mesopotamian and Gaelic female chanting.

Glasgow-based author of short stories and psychological thrillers, Louise has developed a poetic statement about our shared origins and culture, accompanied by a series of words translated between Scots and European mainland languages which demonstrate that though our dialects are different we can still be understood.

Emlyn Firth will use a typographic approach to illustrate Louise’s work, playing with themes of language and communication.

Stef is one of Scotland’s most exciting young playwrighting talents, here she writes a poetic letter that charts the decline of a relationship, an emotion-laden narrative where celebration and excess collide.

One of the world’s leading historical writers, William considers the Scots’ historical relationship with mainland Europe, highlighting significant archeological discoveries both at home and further afield to demonstrate the deep and long bonds that connect us.

Composer RJ McConnell is creating a jigsaw of musical voices reflecting the different places and eras Dalrymple covers in his writing, while Double Take Projections is bringing William’s story to life through animation.

Scottish poet Billy writes a lyrical letter full of nostalgia and humour to a past love with whom he explored Italy as a younger man.

Billy’s piece will be brought to life by James Houston, who is developing a typographical approach that responds to the rhythm and pace of Billy’s writing.

Message from the Skies is free to attend, and each piece can be enjoyed individually. It runs from dusk till 10pm nightly from 1 January until 25 January 2019 and is developed in partnership with Edinburgh International Book Festival, Edinburgh UNESCO City of Literature and supported by Creative Scotland through the Scottish Government’s Festivals EXPO Fund.

A free app, developed by Edinburgh based Odd Panda, accompanies Message from the Skies, containing the letters in their written form, audio versions for visually impaired and foreign language versions of each work in Chinese, Spanish, German and French.

Alongside Message from the Skies, Underbelly is working to encourage creative writing in schools in Edinburgh, the Lothian, Fife and Stirlingshire.

The Message from the Skies competition is open to all under 18 year olds living or attending school in EH, FK and KY postcodes. ‘Young people are invited to write their own letter to Europe, with the winners seeing their work projected onto buildings Edinburgh in January.

The deadline is the 21st December and further details of the competition are available here.

Ed Bartlam & Charlie Wood, directors of Edinburgh’s Hogmanay, said: “Over two hundred years ago, Burns penned the poem to Mrs Dunlop that inspired this project and wrote that “something in us never dies, on [our] frail uncertain state, hang matters of eternal weight”. So it’s wonderful at the start of 2019 to invite these amazing artists to Hogmanay and ask them to collaborate with other artists and respond to this “matter” and explore our ties to Europe by writing, animating and composing a love letter. These letters celebrate our deep, eternal and passionate connections with Europe and it’s exciting to be able to share them with Scotland and the world as they come to celebrate Hogmanay in our capital city.”

On announcing the exciting artists and locations of Message from the Skies, Minister of Europe, Migration and International Development, Ben Macpherson, responsible for the Winter Festivals, said: “Edinburgh is one of the world’s best known cities for bringing in the New Year. Few places celebrate quite like Scotland – the home of the world-renowned Hogmanay celebrations.

“Scotland’s ties with our European friends and neighbours stretch back many centuries. This initiative reflects those ties of friendship, business, culture and commerce – strong ties that the Scottish Government is determined to see endure, whatever the New Year holds in terms of the Brexit process.

“The Scottish Government is a long-time supporter of Edinburgh’s Hogmanay, having provided £180,000 for this year’s festivities via our Expo fund, to enhance this festival and make sure it continues to have the same massive international reach – and so that Hogmanay continues to demonstrate Scotland’s values of fairness, diversity and openness, as well as our unique and inclusive culture.

“A range of events are on offer this year, continuing Edinburgh’s reputation as one of the best cities in the world in which to start the New Year.”

Nick Barley, Director of the Edinburgh International Book Festival, said: “We have thoroughly enjoyed working with Edinburgh’s Hogmanay to select these six authors, all of whom will bring something different to this excellent project.  Following on from the success of the project last year, Message from the Skies once again brings the city to life in the dark days of January.”

Ali Bowden – Director, Edinburgh UNESCO City of Literature Trust, said: “Message from the Skies is a bold and dazzling project that brings literature to the streets of our capital, for the world to see. These superb artists and writers are speaking to us all, opening up a conversation with us about one of the most important issues of our time.”

Message from the Skies is free to attend and is supported by Creative Scotland through the Scottish Government’s Festivals EXPO Fund.