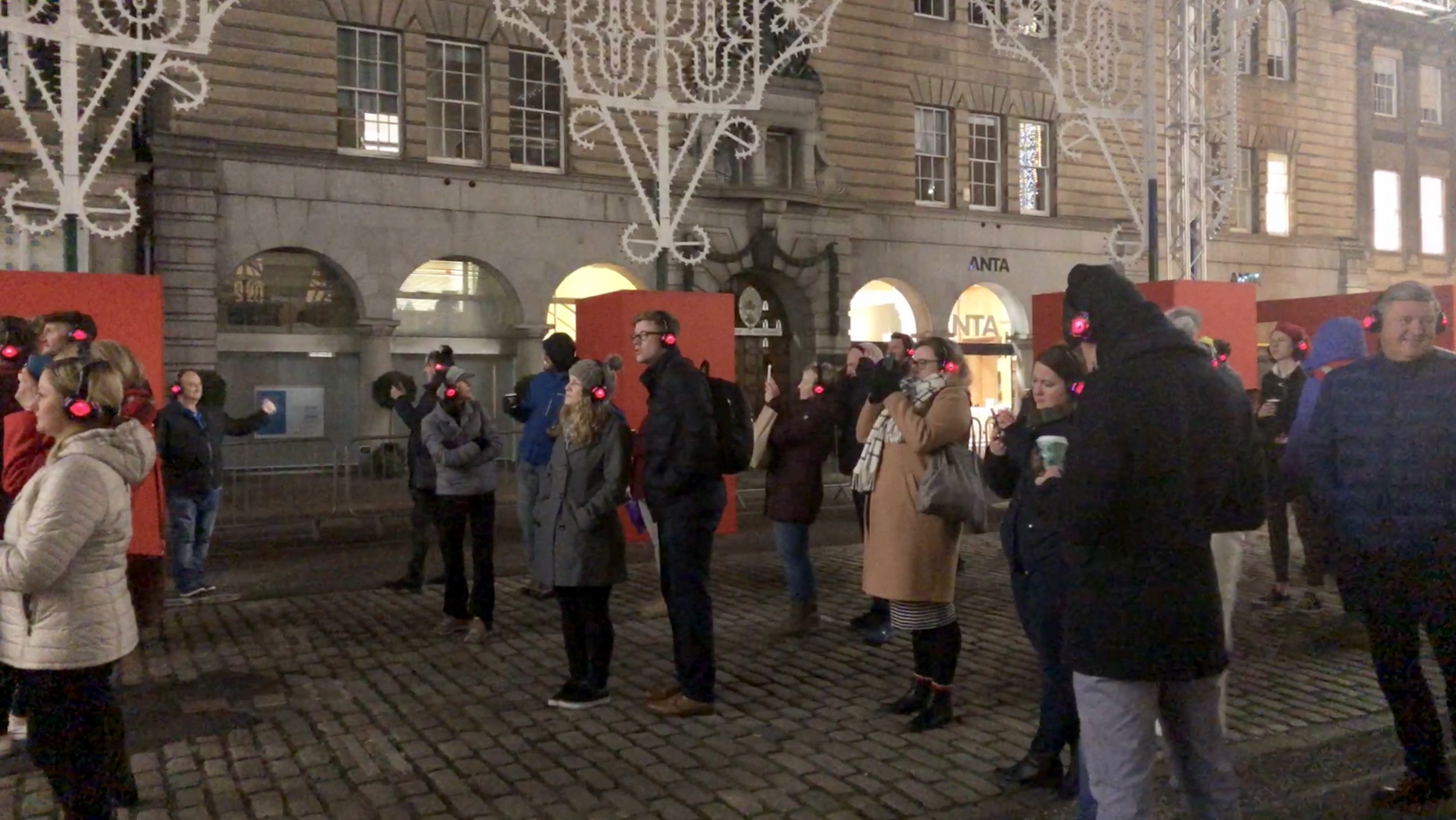 The new attraction this year at Edinburgh’s Christmas is the Silent Disco. You wear headphones, listen to music and watch the lights on the structure on George Street which is adorned with around 60,000 LED lights.

We have been along to it and it is great fun. Sure, people sing along. But is there a lot of noise? No more than there was last year when there was an attraction on George Street which dropped people from a great height – meaning that everyone screamed.

Tonight at the South East Locality Committee there was a report on the table which discussed silent discos in town during the Fringe, the rising numbers of complaints about noise, congestion on the pavements and the fact that this is now at saturation point.

From those two separate matters, some members of the local media drew the conclusion that the council would look at banning silent discos. They are not. At least not yet.

What they were considering this evening was the possibility of licensing these activities in the city, to keep them under some form of control. The report by council officers says that there was a number of complaints over the summer period, some of which were in respect of noise and others relating to obstruction of pavements.

Given that the Silent Light structure on George Street is on an area of the street which has been pedestrianised, there can be no dangers from people wearing headphones stepping into the path of oncoming traffic. The summer tours were run in different areas, where there may be problems with the pedestrians not being so aware of cars and vehicles.

The report which states that the number of walking tours and silent disco walking tours is on the increase, recommends that the matter is referred to the Working Group of Tourism and Communities for further consideration and this is what was decided.

The aim of that group is to try and make sure that residents views are taken into account in the development of a new Edinburgh 2030 tourism strategy being prepared in partnership with Edinburgh Tourism Action Group (ETAG).

In the past the council has encouraged people as a matter of best practice to get a street trading licence if they wish to run tours like this, but the council acknowledges that their ability to regulate them is limited. Many operators have not obtained licences – part of the difficulty being the very fact that they move around.

The report states : “A Street Trader’s Licence is required for street trading by any person who is hawking, selling, or offering or exposing for sale any article, or offering to carry out for money or money’s worth any service to any person in a public place. Crucially all these elements must be in place before a street trading licence is required.”

Cllr Mowat who is widely quoted elsewhere as objecting to these tours on the basis of the noise, claimed this was a ‘surprisingly controversial report’ . She asked the council officer to clarify if there had been any engagement with The Scottish Government which Andrew Mitchell the Regulatory Services Manager answered saying: ” The last look at this legislation was in 2015 in relation to Air Weapons.”

Are these matters we should worry about, or has this been conflated into a possible case of Bah, Humbug?

We will as always welcome a comment from Cllr Mowat, or indeed any other councillors, on this matter, but at the time of writing this she is still at the locality meeting.

Since writing this article Councillor Mowat did indeed respond to our late night email asking for her comment.

She said : “This all boils down to better management of the city – especially during the busiest times of year.  We saw with the managing the Festival City report at Full Council last week there is huge demand for space on the streets during the summer and this creates conflict between pedestrians and traffic and those who are working and living here and those who are playing.

“The Director of Place is on the record saying he is kept awake at night because of the busy-ness of the streets – adding in regular crowds of 50 or 60 people listening to headphones and moving as a group can cause pedestrian jams.  It may be boring to ask for better management but I think it is the duty of the council to respond to the concerns raised by residents about noise and congestion on the pavements just as much as on the roads.

“On the silent disco on George Street – that seems entirely appropriate – safe, not creating a pedestrian jam, seasonal and jolly good fun I expect – just as the tower of screams was not in the right place last year and caused a lot of complaints.  The Council managing its streets is what is called for and if you think that’s the spirit of Scrooge – I’ll just have to thole it!”