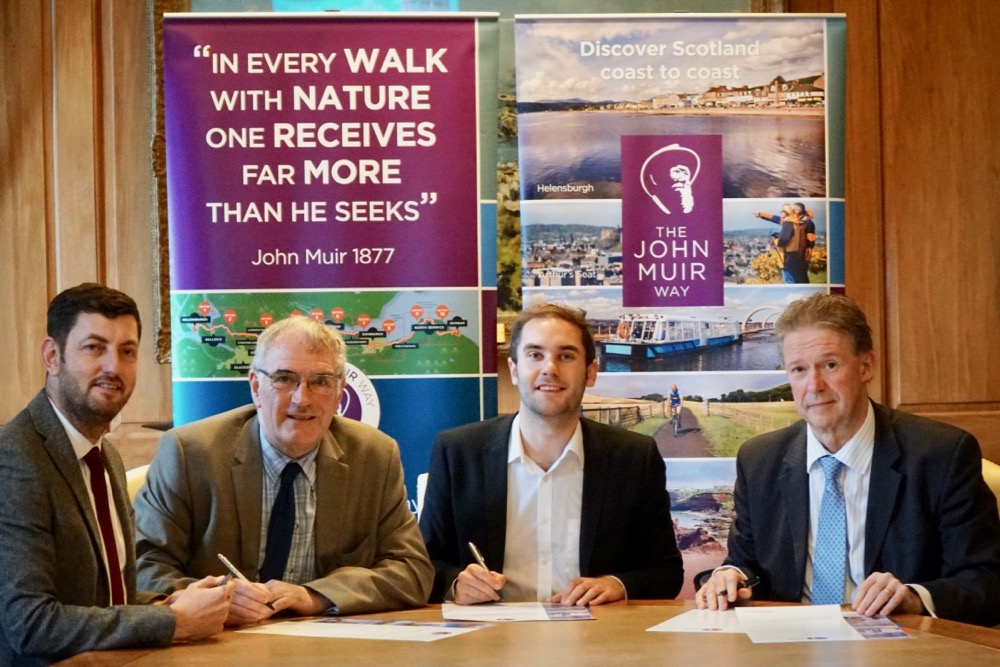 At last week’s council meeting the Council Leader Adam McVey lauded John Muir, his work in the USA, and also the John Muir Way which was recently introduced in Scotland and which cuts through Edinburgh.

This sets out the importance of the route to the quality of life, health and economic wellbeing of those who live nearby. The aspiration is to make the route accessible to all and attractive to both residents and visitors increasing the understanding of Muir’s work to make people enjoy the natural world more. The council has now signed up to this vision and will work alongside the John Muir Way partnership to manage and maintain the route.

Cllr McVey, who raised a motion to Council recommending the signature of the Concordat, said: “We’re lucky to form part of the John Muir Way, which is a fitting tribute to the pioneering Scot, whose work to conserve the natural environment is known the world over.
“I’m delighted to be able to sign the John Muir Way Concordat in recognition of his legacy to bring people closer to nature, and also to support a vision for the future of the route and the many benefits it brings to Edinburgh and further afield, in terms of health, wellbeing and economic development.”
Depute Council Leader, Councillor Cammy Day, said: “Not only does the John Muir Way bring people closer to some of Edinburgh’s major landmarks, but it also connects to our great network of paths and off-road routes, encouraging active travel by letting users explore the city further on foot or by bike.
“By signing this concordat we’re committing to enhancing and supporting this great resource for future generations to enjoy.”
Keith Geddes, Chair of the Central Scotland Green Network Trust (CSGNT), said: “The John Muir Way takes in the diverse landscapes and rich heritage of central Scotland and we are committed to working with the City of Edinburgh Council to ensure that it is easily accessible and attractive to local people, businesses and visitors, providing opportunities for all to increase the understanding of John Muir’s legacy and philosophy through getting closer to nature.”

When the motion was discussed at the full council meeting, Conservative councillor Jim Campbell lodged a formal addendum asking first of all that the council might be persuaded to reinvigorate its Promenade Strategy, but finding that this had already been done in May this year, he altered his formal demand to say that the council looked forward to the updated report on completing the continuous route along the shores of the Forth from Joppa to Cramond. The report will be heard by the next Transport and Environment Committee.

The Conservative councillor said :  “It would be of great interest to me and some of my constituents to have a clear articulation of how the promenade strategy has morphed into these new exciting projects that the Council Leader described.”

The ‘exciting projects’ the Council Leader had mentioned included the Edinburgh Shoreline Project. Their work aims to rediscover the fascinating and unknown history of the route. It is also trying to find out more about the plant and animal life along the route and inspire people to explore the coast, but also take responsibility for its future.

The council’s policy in regard to the Edinburgh promenade follows from a design code drafted in 2008. The idea is to have a design principle around bins, signage, benches and public art. The promenade runs from Cramond to Joppa and the first two sections which total just under 4km were completed in 2009 and 2011.