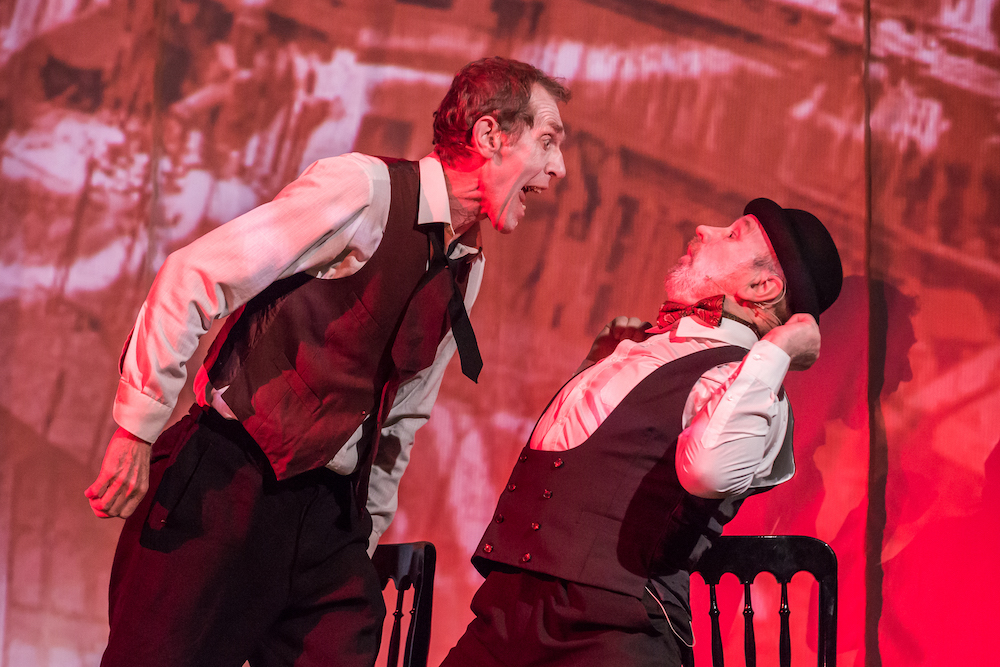 There is something very big happening at Leith Theatre this week. It is the first professional theatre production staged in the space in three decades, and for that reason alone you might think of going. The fact that this is an anti-war piece of theatre cabaret and it is being staged this week when we are remembering the dead of 100 years ago, only adds to its importance.

The fact that it involves those from countries who were at war with or against one another ten decades ago probably adds to its poignancy too.

This is not a theatrical piece which will appeal to everyone, but it will charm and enchant a great many of you. It is a magnum opus which careers around the theatre in a mesmerising and slightly disturbing fashion, keeping the audience on its toes. You should know that there is some nudity in the work, it is very loud at times and it can be a challenging piece to watch which you will not completely understand all the time!

One thing which struck me all the way through was the very way the actors moved whether they were on stage or on the floor of the theatre. They are all clearly very highly trained  in physical theatre, and have a particular way of moving which makes them appear in this work almost as a pack. I was in awe of their ballet-like fluidity and presence, although it is difficult to completely explain it – you will have to see it!

This work is presented by German company, Theaterlabor whose cast members are from all over Europe. Co-directed by John Paul McGroarty who lives in Leith, (that alone being an obvious reason for the play coming here), it also involves his co-director Yuri Birte Anderson from Germany, and is translated by Patrick Healy and produced by Alexandra Lort Phillips and Siegmar Schröder.

Leith Theatre is well suited to the play which at first only uses the front part of the stage, with what looks like for all the world like a sheet hung on a clothes line bisecting it.
There are fabulous projections, sometimes two different and merging projections, instead of sets, and minimal props are used apart from some chairs from time to time.

Translated from Karl Kraus’ original German, The Last Days of Mankind was written during 1914 and 1922. Each of the five acts is devoted to one of the five years of the First World War which is so much in our minds just now.

There is madness, singing, screaming and many, many words, some of which are based on contemporary sources. It appears at times to be chaotic – there are a couple of dozen actors on stage at several points. But it is all based on newspaper articles and real life.

And it relates to our real lives today with an examination of the media, the war correspondents in their day and whether they have created the news reality which we know.

There is music throughout, quite haunting and quite lovely music.

If somebody told you that Matt Groening the creator of the Simpsons thinks you are the best thing since sliced bread, then it might also persuade others you are pretty good. The Tiger Lillies who are appearing at Leith Theatre this week  have had that said of them, and they are more than pretty good. They are excellent, and wrap themselves into and around The Last Days of Mankind. They are Olivier award winning cabaret artists, and their Martyn Jacques composed original songs to accompany this epic work.

This work and perhaps others which will now follow it, puts Leith Theatre firmly on the map as a serious venue. Some work still needs to be done to renovate the theatre and make it fit for purpose, but the ease with which the actors accessed the first floor balcony, the floor where the audience sits, both in chairs and in a cocktail setting at tables and chairs, all mean this was the perfect venue for this production. Hopefully others will follow their lead.