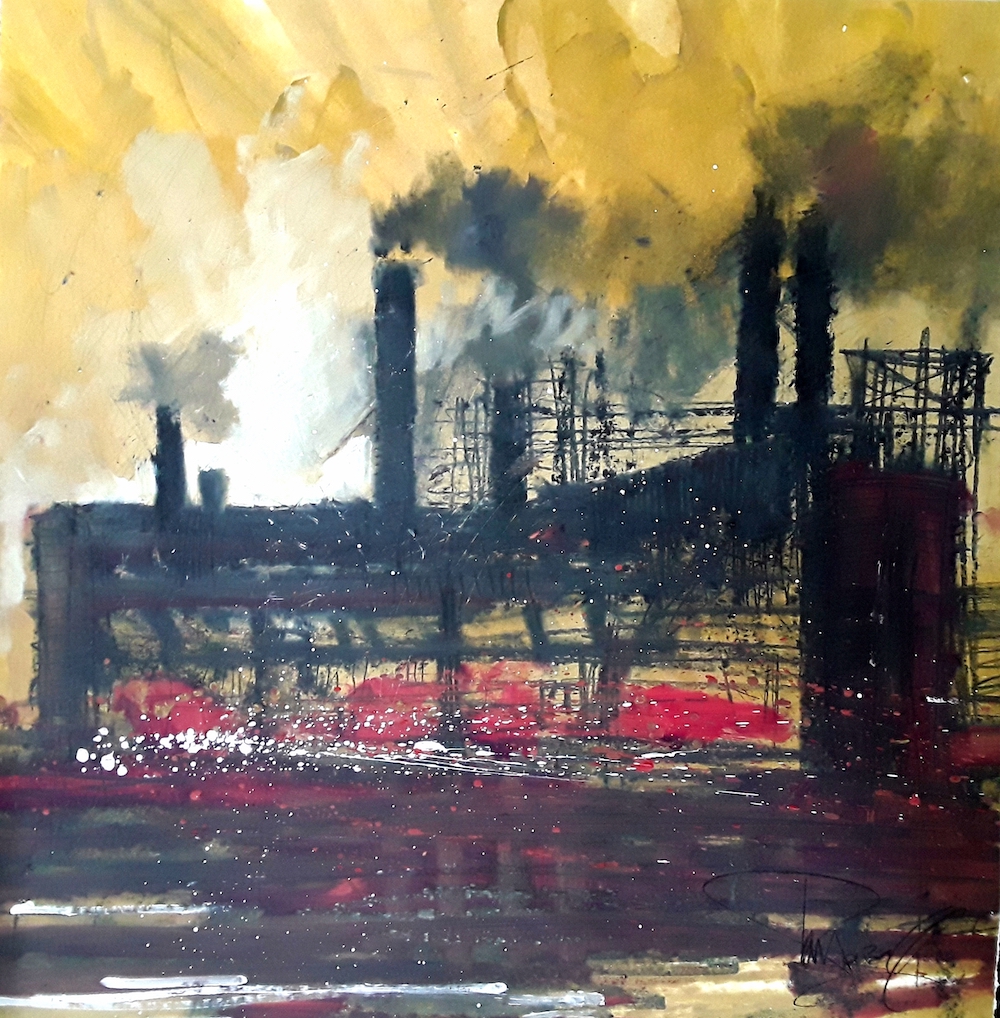 From 19 October to 18 December the Art & Craft Collective will show selected art works from the ‘Steel’ series by Stoke-on-Trent based artist Ian Pearsall and sculptural silver jewellery by Xanthe O’Connor. ‘Fire and Light’ is a major exhibition of drawings by Ian Pearsall and is his first exhibition in Scotland.

Ian explained why he chose this subject matter: “Following my successful ‘Black Streets’ Exhibition at Trent Art Gallery when I painted my first passion, the people’s architecture – the terraced houses of the great working people (in any British city),   I finally got around to following a family story.  This is the story of my great-great granddad William Asher who started work at The Shelton Bar Iron Company aged just sixteen back in 1859.

“Shelton Bar is a huge story in the history of Stoke-On-Trent employing over ten thousand people at its peak. It was the reason why the city was bombed by the Luftwaffe during the Second World War, and following closure the land was used for the second great Garden Festival in the UK to reclaim the land it stood on.

“I’ve taken a tangent with this ‘STEEL’ Series – I wanted to free up my style after working on the ‘Black Streets’ – I wanted to convey the excitement; drama, light, smoke, sparks and fire and all that working with STEEL implies.”

Gallery owner Linsay Given Black said : “We are very excited to be hosting this exhibition.  I saw Ian’s work on Twitter, quite by chance, liked and commented on it and before we knew it, Ian had come up to Edinburgh, seen the Gallery and we had organised this fabulous exhibition!  The positive power of social media in action.”


Ian Pearsall was born in Rhodesia where his father had gone to live, leaving The Potteries behind him at the age of 18 to carve out a career with Customs & Excise.

Mr Pearsall Sr came home after five years to marry his childhood sweetheart from two streets away in Birches Head. He returned to Africa with the banner headline in the City News ‘Man from Africa marries local girl!’

Ian studied art in Newcastle-under-Lyme and says that Stoke-on-Trent is his epicentre with its creative history. The City of Culture bid revived culture in the town even though it was not awarded the title.

Xanthe O’Connor will exhibit her scupltural silver jewellery. She studied silversmithing and lapidary for a number of years before establishing a studio at Summerhall. She now works full time as a jewellery designer and maker, drawing inspiration from the natural world and particularly landscapes.

She said : “My passion is driven by examining the elemental forces that create nature’s art and how to replicate a microcosm of these powerful juxtaposed elements that sculpt, form and create, into wearable jewellery.”

I met Xanthe at the opening of the exhibition and she explained that all of her jewellery pieces are produced individually and there are no two the same. She has to be inspired by the story and the emotion to allow her to make each piece of jewellery whether it is a ring or a necklace.

The necklace which she is photographed with here represents a mythological tale about Zeus who turned himself into a cloud to attract a high priestess Io (Galileo named a moon after her). His wife Hera learned of the relationship and banned her. Xanthe is interested in many things such as volcanoes and what is created by the temperature drop which results. She began looking at the natural phenomena and glaciers but expanded into mythology from that.

Each piece of jewellery comes with its own story which Xanthe researches and writes to go with it.

Here is a link to the booking page