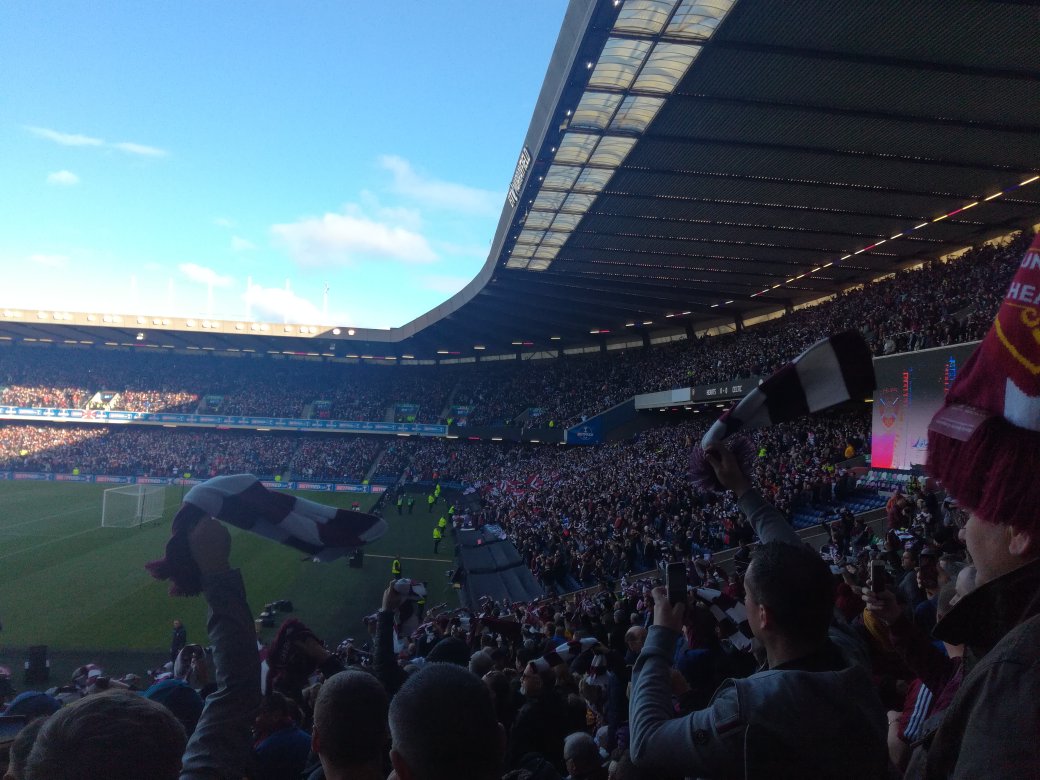 Hearts run of bad luck in relation to injuries continued at BT Murrayfield on Sunday afternoon as the league leaders crashed out of the Betfred Cup after losing 3-0 to cup holders Celtic in a tense semi-final. Second half goals from Sinclair – a penalty – Forrest and substitute Christie took the Glasgow team through to another League Cup final and Hearts long wait to win this trophy – they were last triumphant in 1962 – continues.

The tone of the game was set after just eight minutes when the hugely influential Steven Naismith limped off the field with a knee injury. The on-loan Norwich City player has a history of knee trouble and the early indications are the Scotland striker will be out for a few weeks. This added to the long-term injuries to Christophe Berra, John Souttar and Uche Ikpeazu – and the likelihood of Peter Haring also being out after struggling today – meant it was an injury too far for Hearts. They gave away a penalty for the first goal and keeper Bobby Zlamal spilled the ball for the second goal. There was nothing a deflated Hearts team could do about the third – a superb strike from Christie.

Yet it all seemed so different as the game kicked off. Nearly 30,000 Hearts fans inside the home of Scottish rugby made one hell of a noise and their trademark swirling of the scarves just ahead of kick-off made the hairs on the back of one’s neck stand up.

But when the game kicked off it was a tense start from the Maroons – made even tenser when Naismith had to leave the field so early. The Celtic fans in the crowd of over 61,000 – the largest football attendance in Scotland for years – cheered sarcastically, a clear sign they knew the value of Naismith to this Hearts team.

Steven MacLean took the captain’s armband but, in truth, Hearts lacked a commanding figure when Naismith went off. His replacement was Danny Amankwaa but, try as he did, he was never going to have the same presence as Naismith.

Hearts manager Craig Levein made a couple of changes to the team that defeated Dundee on Tuesday evening. Olly Lee and Peter Haring were back in the team at the expense of Harry Cochrane and Callumn Morrison. The return of Lee was expected but one doubted the wisdom of thrusting Haring back into the team after missing the last couple of games and, more to the point, the absence of the pacey Morrison against a Celtic side who surely would have been leg weary after their exertions in Leipzig on Thursday evening.

Hearts did have the ball in the net in the first half, but Steven MacLean  – who was booked in the first minute by the over-officious referee – was clearly offside.

The penalty incident six minutes into the second half was the catalyst for Celtic’s subsequent dominance. Oliver Bozanic nudged Christie inside the penalty box. There seemed minimal contact but referee Willie Collum – for it was he – immediately pointed to the penalty spot. Sinclair made no mistake with the penalty kick sending Bobby Zlamal the wrong way.

Midway through the second half, Celtic doubled their lead. It was not a goal Hearts keeper Zlamal would want to see again after he spilled a weak shot from Christie. He scrambled the ball off the line, but Forrest raced in to drive the ball into the net. It was the beginning of the end for Hearts.

The end duly arrived in the 72nd minute when Christie added a sublime third goal from the edge of the Hearts penalty box. Cue a mass exodus from the Maroon Army who knew it was all over.

More worrying for Hearts is the news that Naismith and Haring may face a few weeks out. The loss of Naismith in particular is incalculable. Craig Levein now faces a huge selection headache ahead of Wednesday’s Ladbrokes Premiership game against city rivals Hibernian at Tynecastle.