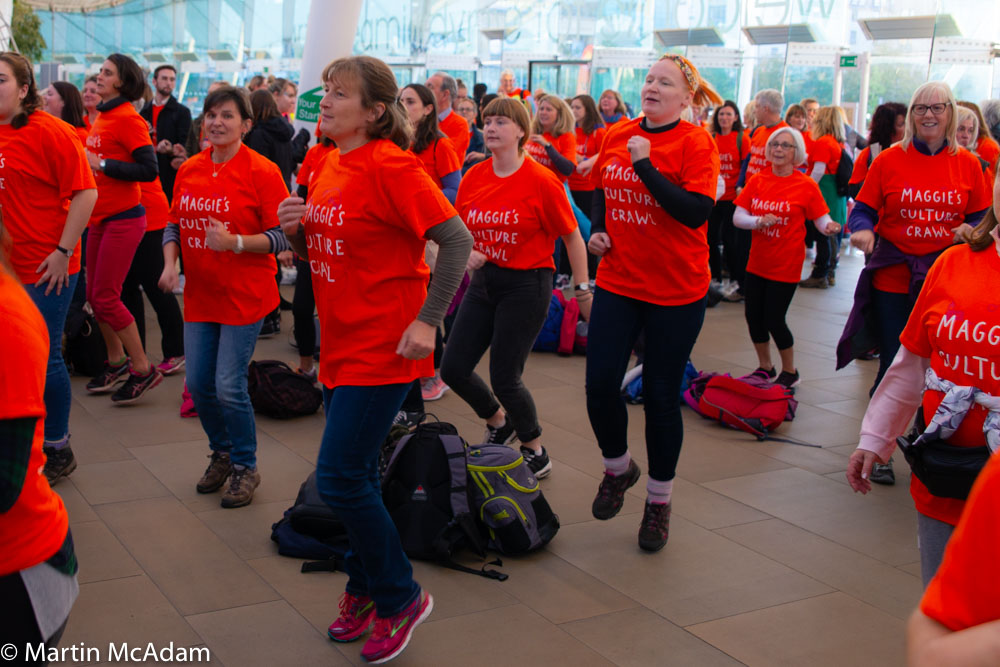 Tonight there are 400 people walking the streets of the capital, all wearing orange T-shirts. They are taking part in the Maggie’s Culture Crawl which criss-crosses the city beginning from Dynamic Earth and ending up with a party at Summerhall. We joined them as they left Dynamic Earth and then followed them all the way to the Biscuit Factory where the Buick 55s and the Kennedy Cupcakes were rocking and rolling.

The whole purpose of the event is to have a bit of fun, see the city in a new light and get the chance to see inside some venues where the walkers might not have been. Other venues included The Carlton Bridge Club, The Waldorf Astoria, St Mary’s Cathedral on Palmerston Place, The Scottish Poetry Library and finally heading for a closing party with hot chocolate at Summerhall.

We spoke with Andy Anderson Centre Head of Maggie’s Edinburgh who told us that the fun part was just as important as the fundraising. There were 22,000 people who visited Maggie’s last year, and this private charity funds their care.

Walking out with Andy at the front of the walk as it left Dynamic Earth was Carol Hudson.

Carol, 54, was diagnosed with a brain tumour nearly five years ago. After initial treatment, Carol thought she was fine but in 2016 the cancer returned for a second time, and this time it was incurable. Carol started to attend Maggie’s during her radiotherapy and describes it as her ‘second home’.

The mum-of-two has taken part in the Edinburgh Culture Crawls for the past two years as a way of saying thank you for the support Maggie’s has given her and her family.

Carol said: “Cancer is a debilitating disease but if you strive to do your best then, hopefully you can. The Culture Crawls are such good fun. The walk itself is physically challenging but you get to see the city and it’s venues in a new light; you see inside some of the places you may just have passed along the way and get to know the history of them and there’s lots of fun, food and entertainment along the route.”

Maggie’s has a network of Centres across the UK and 11 Culture Crawls will be happening up and down the country in September with the aim to raise £500,000 to help support people living with cancer.