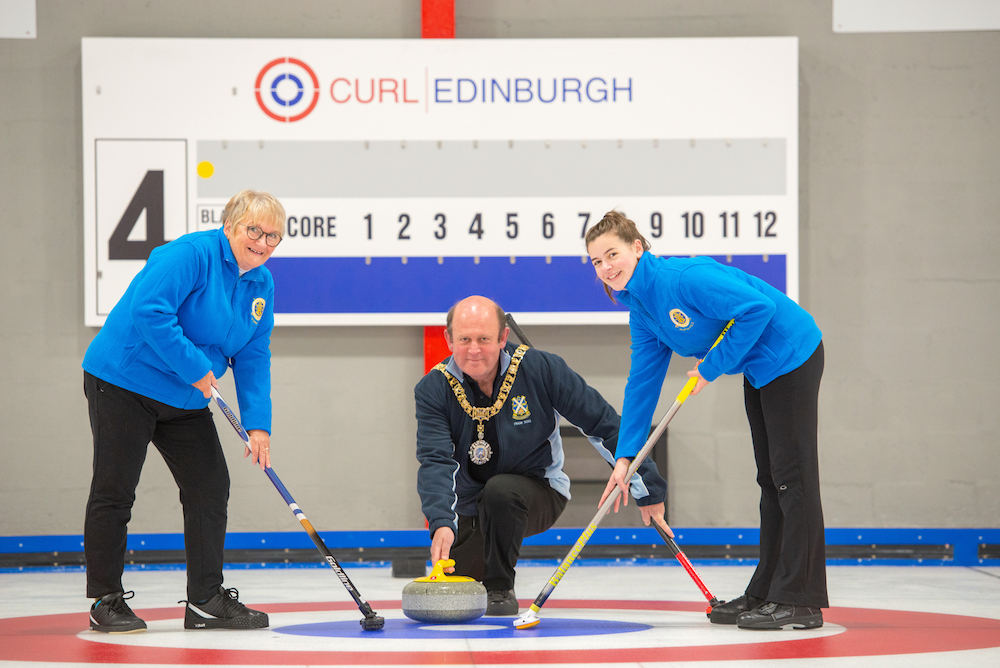 Work is now complete at Edinburgh Curling Club at Murrayfield.  A new £850,000 ice pad  has been installed there,  with more than £500,000 raised by club members as part of a £1.1 million project which will include replacing the building’s external cladding.

An estimated 1600 members from 80 clubs based at the rink will benefit from the energy efficient and environmentally friendly surface, which will drastically cut the amount of water required to freeze the surface and reduce energy consumption by up to 20% per year.

Edinburgh Lord Provost, local councillor and keen curler Frank Ross, threw the first stone on the new ice pad at a special Donors’ Bonspiel held to mark the occasion. The rink floor has been named in memory of Douglas Baxter, the late ice rink manager, who sadly passed away last year aged 39.

Norman Watt, chairman of Murrayfield Curling Ltd, said: “The generosity of our club members and the welcome support from sportscotland and the World Curling Federation has provided Edinburgh curlers with one of the best ice surfaces in the UK.

“By reducing our water consumption by a factor of five we will enjoy substantial energy efficiencies, and when the modernisation programme is complete in 2019 we hope to have reduced power consumption by 30%.

“Curling is a sport with no age barriers, enjoyed by the young and not-so-young. We hope this excellent surface will encourage the next generation of curlers to excel in this wonderful sport and help maintain Scotland’s reputation for producing some of the world’s best curlers.”

Edinburgh’s Lord Provost Frank Ross said: “As someone who has spent many enjoyable hours in the curling hall, I was honoured to be invited to throw the first stone on the new ice. The £1.1m investment in the hall is hugely welcomed and the Edinburgh Curling Club has done a tremendous job with their fundraising. The new floor will ensure Murrayfield continues to offer one of the premier facilities in the country for one of our nation’s original sports.”