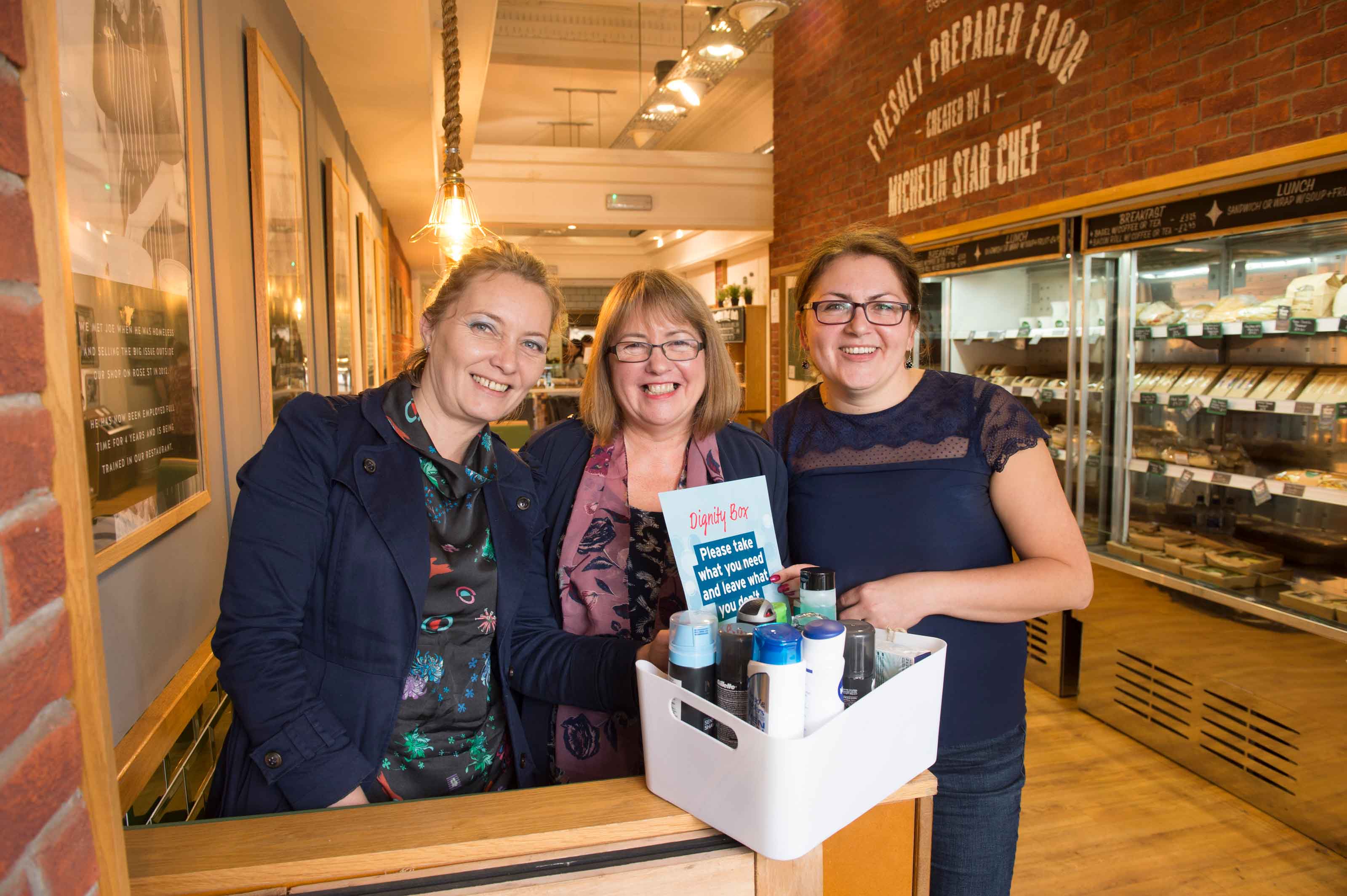 A campaign being spearheaded by an Edinburgh Napier lecturer will mean that free
toiletries are made available to those who need them most across the Lothian
region.

The initiative called ‘Dignity Boxes’ is the brainchild of Isabel Dosser, a
lecturer in palliative care within the University’s School of Health and Social
Care. The boxes will be placed in specific areas throughout the region and will
offer a range of toiletries including shampoo, conditioner, deodorant, soap and
shower gel to those in need.

The first box has been made available at leading homeless charity Social Bite’s
Shandwick Place shop.

Every second Tuesday the charity runs its Social Suppers initiative – which supplies hot
food and meals to the homeless – and attendees will be able to take what they
cannot afford by getting access to the products in the Dignity Box, without
having to ask or thank anyone.

Further boxes have been earmarked for a number of locations across the region in the
coming weeks, including a student box at Edinburgh Napier, the Street Soccer
project based in Portobello, The Willow project on Lauriston Place as well as
Daisy drop-in, and the Dale in West Lothian. For Isabel, the campaign is a chance to give something back to those less fortunate
than herself.

She said: “The idea really stems from my time at a nursing conference last year.
Working in nursing all my life, I’ve always been aware of the benefits and welfare
available to people but after attending workshops in poverty at the conference,
I soon began to think about ways I could help others.

“After learning about a voluntary service (COPE) in Glasgow that provides advice and
free sanitary products, I came up with the idea of the Dignity Box – a
selection of free basic toiletries that will be placed in areas across Lothian
experiencing deprivation.

“I’m a firm believer that little things make a big difference. The aim of the
Dignity Box is to promote in a small way, self-worth and dignity by allowing
those in need to take what they cannot afford or get access to without having
to ask or thank anyone.

“We are very grateful to Social Bite for allowing us to install the first box in
its Shandwick premises and I’m also grateful to the University for agreeing to
be the first sponsor of what I hope will be a sustainable initiative that will
expand in future. I would also like to thank friends, family, students and
colleagues at Edinburgh Napier who have kindly donated items to allow me to get
the campaign up and running.

“We’re appealing to anyone who can donate items to the box, or host a donation box in
their own workplace, to come forward – together we can all make a difference to
the lives of others.”

Barbara Haig, senior social impact team at Social Bite, said: “We were delighted Isabel would consider Social Bite for this initiative. This contribution helps our rough
sleeping and homeless group who might not otherwise be in a position to
purchase these essential items. Isabel also dedicated her time proactively to
volunteer which was a very kind gesture.

“The impact, however small or large, is something Social Bite is proud to highlight. We are grateful for the dignified actions Isabel showed born from a need to ‘give back’. Through the kind actions Isabel has shown we hope this can inspire others to be more cause driven.”

The campaign is asking for donations of the following: shampoo/conditioner, shower
gel, soap, shaving foam, deodorant, toothpaste and toothbrushes. These can be
donated at the iPoint receptions at any of Edinburgh Napier’s campuses – Merchiston, Craiglockhart and Sighthill – or can be organised direct with Isabel at i.dosser@napier.ac.uk