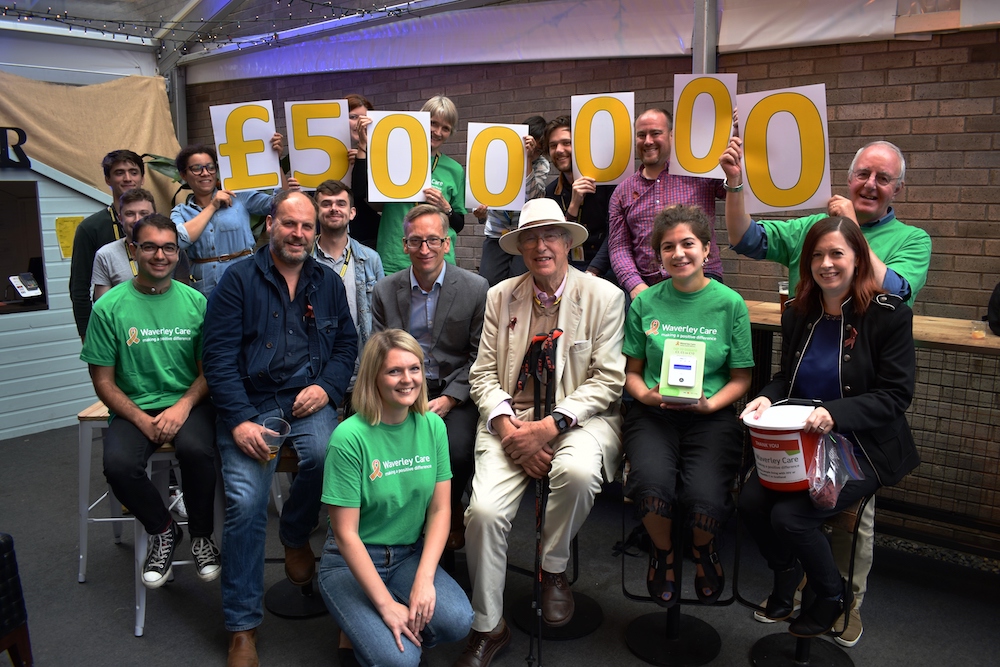 Volunteers and staff at Waverley Care and the Pleasance celebrated this week as the Fringe’s longest-running fundraising partnership broke the £500,000 mark.

The total was announced at a reception to thank Pleasance staff for their support. Waverley Care and the Pleasance Theatre Trust have been working together since 1992, providing a platform to raise money and awareness of HIV and hepatitis C in Scotland.

At the start of the 2018 Fringe, the partners were £25,000 short of the half a million mark – a total passed after collections at the Pleasance Courtyard from last Saturday were counted.

The partners are now setting their sights on their record bucket-collection total of £37,970, achieved in 2016 when the partnership celebrated its twenty-fifth Fringe together.

The money raised at the Pleasance each August contributes to Waverley Care’s work – supporting people living with or affected by HIV and hepatitis C, and working with communities to prevent new infections.

Waverley Care’s Senior Fundraiser, Karen Docwra said: “Passing the £500,000 mark is an absolutely amazing achievement and a fitting tribute to our unique relationship with the Pleasance.

“From way back in 1992, when we only had a handful of volunteers, to 2018, when around 120 people will get involved, all of the money raised has helped us to make a huge difference to people living with or affected by HIV or hepatitis C.

“We’d love to say a huge thank you to the staff at the Pleasance, to all of our amazing volunteers and to our Fringe coordinators over the years who have helped us get to this point.

“The response so far in 2018 has been fantastic, and now that the half-a-million mark has been reached, we want to try and make it a record breaking year.

“We’re into the final weekend of the Fringe, so if you find yourself in the Courtyard, or at the EICC, come and say hello to our volunteers and make a donation if you can.”

Anthony Alderson, Director of the Pleasance, added: “We’re delighted that our charity partners for the last 27 years have raised over £500,000 in their buckets around the Courtyard.

“Over the years, audiences at the Pleasance have always been so generous to this amazing charity. Their work in the community with people living with HIV and hepatitis C is so vital and this money can really make a difference to their work.

“I hope that the fantastic response they’ve had from our public so far continues over the final weekend of the Fringe.”