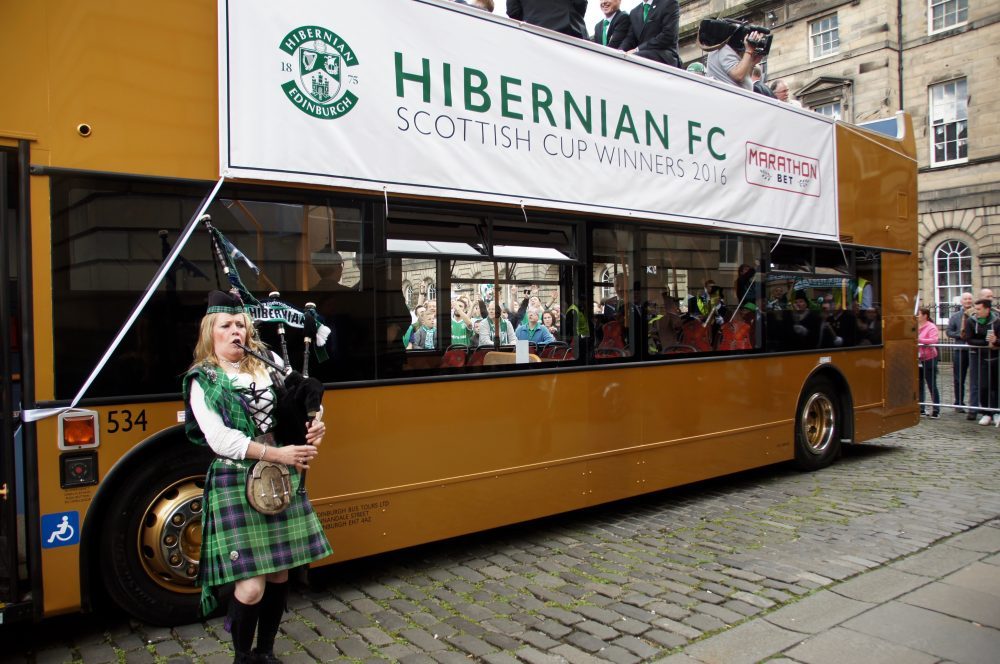 Tributes and messages of support have been pouring in for former Hibs’ star John McGinn who yesterday joined English Championship side Aston Villa for an undisclosed fee, penning a four-year deal.

The 23-year-old Scotland international was enjoying the Edinburgh Festival on Monday when the call came in and he travelled to Birmingham at meet manager Steve Bruce.

After checking out Villa Park and the superb training facilities, McGinn had dinner with Bruce, the former Manchester United captain and decided to move south despite interest from his boyhood heroes Celtic.

McGinn won the  Scottish League Cup winner with St Mirren in 2013, beating Hearts in the final before moving to Hibs two years later.

He helped Hibs end their 114-year wait to lift the Scottish Cup in 2016, and was part of the team that clinched promotion to the top flight the following season.

Last season McGinn was an influential presence in the Hibs midfield as Hibs finished fourth in the table, amassing a record points haul in the process and qualifying for Europe.

He made his Scotland debut in a friendly against Denmark in 2016 winning the man of the match award and in total he has won nine caps so far.

Hibs’ fans are planning a tribute to McGinn during tonight’s Europa League qualifying game against Molde in the seventh minute of the match.

Hibs’ Head Coach Neil Lennon said McGinn leaves Easter Road “with everyone’s best wishes.He’s been absolutely superb on and off the pitch.He’s a joy to work with and I’ve really enjoyed watching him play.Hibs have been very good for him, and John has been very good for Hibs, and we wish him all the best.”

Chief Executive Leeann Dempster said: “John has been a fantastic servant to this club over the last three years. He has developed as a player and an individual in his time here – it’s been a great environment for him.”

Fans’ director Tracey Smith tweeted: “All the best in your new chapter. Thanks for all the memories. I’m sure I’m not the only one who is going to miss your mum! Looking forward to watching your progression down South.”