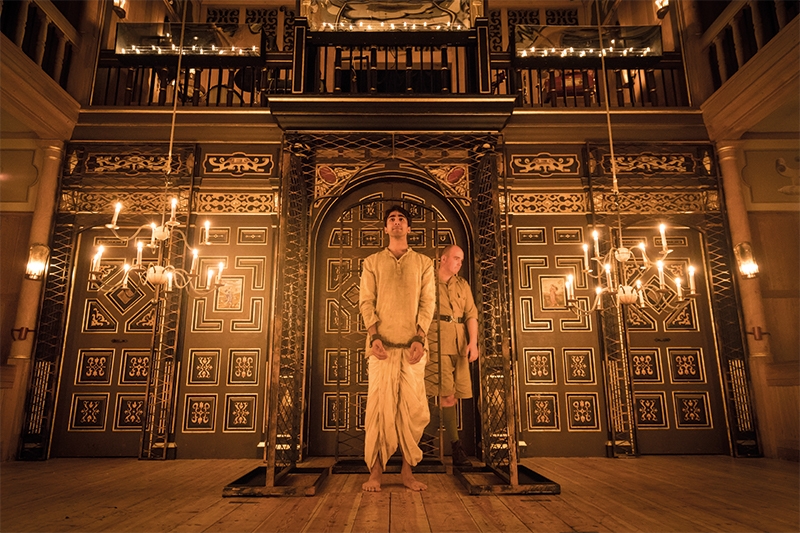 It was very pleasant to sit for a while in the Traverse this afternoon and be entertained to snippets of the plays which were shortlisted for the 2018 James Tait Black Prize for Drama.

An extract of each of the plays was read by professional actors to the packed audience in Traverse 2, and each of the playwrights was interviewed by TV presenter, Shereen Nanjiani.

The winning playwright announced this evening is Tanika Gupta who wrote the play Lions and Tigers based on the story of her great uncle.She wins a cash prize of £10,000 as part of the award made annually by the University of Edinburgh in association with Playwrights’ Studio, Scotland and the Traverse Theatre.

This is a tragic tale and the part we listened to ended most dramatically with his final letter home while awaiting his execution.

It is a powerful play and the great uncle, Dinesh Gupta, was either a terrorist or a freedom fighter depending on your point of view, but as a young man the playwright explained Dinesh was described by other members of the family as fun. He was involved in the battle for Indian independence and battles between British lions and Bengal tigers, giving rise to the play’s title. Staged last year at the Sam Wanamaker Playhouse as part of the Shakespeare Globe’s Festival of Independence, and directed by Pooja Ghai the associate director of Theatre Royal Stratford East, the play appropriately marked the 70 years since Indian independence and freedom from colonial rule. Three other plays were shortlisted : The first was Anatomy of a Suicide by Alice Birch weaving three generations together in their various attempts at suicide and experience of depression. The overlapping speeches show only too well that each of the three women had similar experiences. The second Glory on Earth by Linda McLean deals with a novel take on the story of Mary Queen of Scots and her relationship with John Knox. The excerpt explained that Mary arrived at the Docks in Leith some two weeks ahead of plans because of following winds, throwing her welcome into just a little chaos.  The third Locker Room Talk by Gary McNair included remarks made by men during interviews which he had conducted. These were mainly sexist and relentlessly misogynist, quite clearly drawn from men in various walks of life, but all with the same characteristics.

The drama award was launched in 2012, when Britain’s oldest literary awards – the James Tait Black Prizes – were extended to include a category to celebrate innovative playwriting.

Each year, the accolade is given to a new play in English, Scots or Gaelic, which demonstrates an original theatrical voice and makes a significant contribution to the art form.

Uniquely, the drama prize is judged by emerging artists, students and established theatre experts, rather than critics.

The panel featured students and academics from the University of Edinburgh, representatives from the Traverse Theatre, Playwrights’ Studio, Scotland, the Royal Conservatoire of Scotland, Schaubuhne Theatre, Berlin, and a freelance theatre director.

Chair of the judging panel, Greg Walker, Regius Professor of Rhetoric and English Literature at the University of Edinburgh, said: “The talent and creativity shown by this year’s shortlist was astounding. Tanika Gupta’s epic drama pushes the boundaries of verbatim theatre, telling an important story in a fresh and authentic way never seen on stage before. It is a rousing piece of work that was a worthy winner for this year’s James Tait Black Prize for Drama.”

Fiona Sturgeon Shea, Creative Director, Playwrights’ Studio, Scotland, said: “”It is an enormous privilege to be involved in the James Tait Black Prize for Drama, both personally for me as a judge, but also through our work in further exploring the shortlisted plays with a director and actors from Scotland, as part of the Award ceremony.

“It is always an agonising decision to reach just one winner from such a strong field and an exceptional shortlist. Tanika Gupta’s play, Lions and Tigers, brings vividly to life a fascinating historical period with a warmth and power that is extraordinarily moving.”

Orla O’Loughlin, Artistic Director at the Traverse Theatre, said: “This year’s shortlist represents the impressive breadth and depth of innovation that the James Tait Black Prize for Drama seeks to champion. These writers have created vibrant, urgent and provocative new plays which speak deeply to our turbulent times, and we are particularly thrilled that Locker Room Talk has been shortlisted. I am delighted for them all and congratulate them on their great success.”