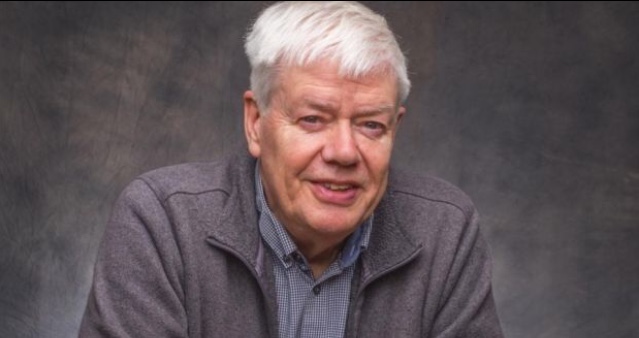 In the midst of all the frenzy that is the Old Town in August, St Andrew’s and St George’s West Church on George Street never fails to provide a space of calm. Its festival talks are something I have come to look forward to, and The Power of Music on Thursday was certainly no exception.  In a simple Desert Island Discs format, writer and librettist Bernard MacLaverty was invited by opera singer Andrea Baker to choose five pieces of music that have personal resonance for him. MacLaverty is such a warm, engaging person, and Baker such a good chair, that the following hour felt more like a chat with two particularly genial old friends. MacLaverty has written books, short stories, radio and TV plays, screenplays and libretti. His novel Grace Notes was shortlisted for the 1997 Booker Prize, and Justine Jordan, writing in The Guardian, called Midwinter Break ‘quietly brilliant’. Does he come across then as a Famous Author with a high opinion of himself? No he most certainly does not – he’s quick to tell us he was no great shakes at school, and his talk is littered with comments like ‘oh that’s showing off isn’t it?’ and ‘oh shut up Bernard!’.

MacLaverty begins with a reading from what he calls a ‘very short story’, Christmas Junket, in which a young couple carry a bowl of milk pudding across town on the underground. His description of the wobbling junket is hilarious. As in all good short stories, very little – and yet an awful lot – happens. The careful transporting of the junket becomes a metaphor;

‘Neither of them wants to spill the precious joy of what it is to be young and loved at Christmas and going out to eat with friends.’

It may be Christmas but religion, says MacLaverty, isn’t the only thing of value in life. And having grown up in Belfast in the 1950s, he knows a thing or two about religion.

A wonderful childhood memory follows, one of hearing Schubert’s Unfinished Symphony (Symphony No. 8 in B minor) drifting up to his bedroom as his father played his shellac records down below. Despite this MacLaverty did not know much about classical music in those days; his first love was jazz. The 1960 film Jazz On A Summer’s Day, a documentary about the Newport Jazz Festival, entranced him;

‘Armstrong, Teagarden, Guiffre… I was in awe.’

A cutaway scene in the film of a man smoking as he plays the cello (‘so cool!’) sent MacLaverty on a mission to identify the music; it was Bach Cello Suite No. 1 in G major. The only recording he could find was by Pablo Casals, and today this is his first piece of music. He and Baker settle back on their chairs, and you can see that they are enjoying every minute (I once read that Radio 3 presenters are the only ones at the BBC who listen to everything they play).

MacLaverty was fascinated by the story of Casals discovering the sheet music in a second-hand shop, long after the Suites had fallen out of fashion, and practising them for years until he felt ready to present them to the public.

In his teenage years in Belfast MacLaverty and his friends formed a skiffle group. They also formed a bond that would last a lifetime.  Each member of the group had a different enthusiasm – opera, literature, jazz; MacLaverty was introduced to Dostoyevsky (The Idiot – the ijeet! – I loved it; before that all I’d been reading was Jennings’), Tchaikovsky, Beethoven and Handel. A master of the art of evoking a scene from small details, MacLaverty describes a friend’s aunts sitting round the fire, chain-smoking as they listen to Radio 3, or, at another friend’s house, hearing a recording of Enrico Caruso on a Dansette record player. They were an educated lot, these friends – one became a publisher, another a painter, another a priest. – and MacLaverty hasn’t done too badly for himself either.

Beethoven Piano Trio No 7 in B Flat Major is his second piece of music;

‘Only later did I realise that Beethoven teases you, and leaves you wanting more. It’s like writing a story and waiting for something to happen.’

MacLaverty’s third choice arises from a television play he based on his story My Dear Palestrina, in which Eleanor Bron is Miss Schwartz, a piano teacher. ‘I was in awe of her; she was beautiful and talented, and she played Schubert Impromptu in G flat major.’

More recently, with Irish composer Gareth Williams, MacLaverty has written libretti; The King’s Conjecture, about King James IV and his barbarous attempts to find out where language comes from, and The Elephant Angel, the true story of Belfast’s first female zookeeper, who took a baby elephant home every night to protect it from wartime bombing. As an opera singer, Baker is curious to know what it was like working with a composer for the first time.

And you can imagine that Williams would say much the same, for what else could it be to work with such a clever, entertaining, good-natured man?

MacLaverty’s fourth piece is Shostakovich’s Symphony No 10 in E minor, but it is fifth that seems to bring both him and Brown most joy. Mahler is, says Brown, an excellent bridge between writing and music. For years MacLaverty had no idea what was happening on stage because he had never seen an opera, nor did he speak foreign languages, but;

‘The music transcended that, the voice was like another instrument.’

He first heard Lorraine Hunt Lieberson singing on the radio when he was cooking;

‘I didn’t move for seven minutes, spoon in hand. Oh but that’s showing off.’

Another picture drawn, another image of the glorious power of music.

And with that, after enthusiastic applause from this well satisfied audience, MacLaverty is away to sign books and chat – except that for him the chat is surely going to take first place. After all, he wouldn’t want to be showing off.

This was an enormously enjoyable afternoon, and I do hope St Andrew’s and St George’s West Church continues its programme in similar vein in 2020 (after all, Desert Island Discs has lasted 76 years…)

Andrea Baker is appearing in Sing Sistah Sing! from 19 to 26 August at the Assembly Rooms, 54 George Street (Venue 20).