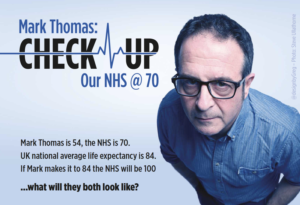 Mark Thomas is 54, the NHS is 70, UK national average life expectancy is 84.  If Mark makes it to 84, the NHS will be 100 – what will they each look like?  Based on a series of interviews with leading experts in and on the NHS, and residencies in hospitals and surgeries, and with director Nicolas Kent, Mark uses his own demise to explore the state we’re in.  What’s going wrong in our NHS, how it can go right and what the future might hold for all of us.

I see Mark Thomas every year and he is always very good.  This time though, he has excelled himself.  How does anybody give you an 85 minute show that features a hefty amount of statistics while also making you glad, proud, horrified, hopeful and angry, while leaving you with aching sides from laughing and a desire to improve your own health?

Simple. They have to be very, very good at what they do and on top of their game.  In Check Up: Our NHS at 70, Thomas is both of those things and more.  For my money this is possibly his finest work to date.  At the very least it is in the running against Bravo Figaro! and the fun he had way back when with McDonald’s drive-through service (13′ 38” – the video quality isn’t perfect but you’ll still enjoy it).

Over the course of the show, Thomas reports on his time in three West London hospitals – St Mary’s (which is in Paddington), Hammersmith (East Acton) and Charing Cross (Hammersmith).  The last two’s names and locations give you an idea how ridiculous and surreal the NHS can be at times.  I know these hospitals well, I was born in the first one and my family and friends were treated in all three, so I know well what they’re like.  From experience, they are the same as other NHS hospitals, they’re just busier, more overcrowded and the shops and food outlets rip you off even more.  Thomas’s shifts at the hospitals are not just token, he is there at the sharp end.  He spent time in A&E (where he makes a huge mistake early in), gastric surgery, renal and dementia, seeing at first hand how much time, effort, skill and money goes into treating people.  Thomas also spend two days with a GP and sits in on appointments with 21 patients, with a doctor who manages to treat every one of them as if they are the first person she has seen.

Not only that, he speaks to various experts and manages to interview two previous Health Secretaries.  He explains how the NHS in England waste epic amounts of money, not through inefficiencies but by having to follow government policies of the last twenty years.  While he briefly spends time on the Scottish NHS, he focuses on what he know. Thomas does give our health service some justified praise, highlighting differences that work in our benefit.  However, if he had looked more closely at it he would see the failings we have too.

I cannot praise this show enough.  I had heard Thomas say earlier this year that he was coming to Edinburgh with something special and he was not wrong.  By the time it finished I wanted to hug him to say thank you for covering what the medical staff have to deal with on an hourly basis.  This is a very accomplished piece and it made me want to improve my own health.  That’s especially true knowing far too many ways I might die now thanks to Thomas’ chat with a retired GP discussing what the future holds for a middle-aged man.  At least a Travis Perkins’ scaffold truck shouldn’t be the end of me.

Laughing at Mark Thomas’ material might though but I think that’s a decent way to go.