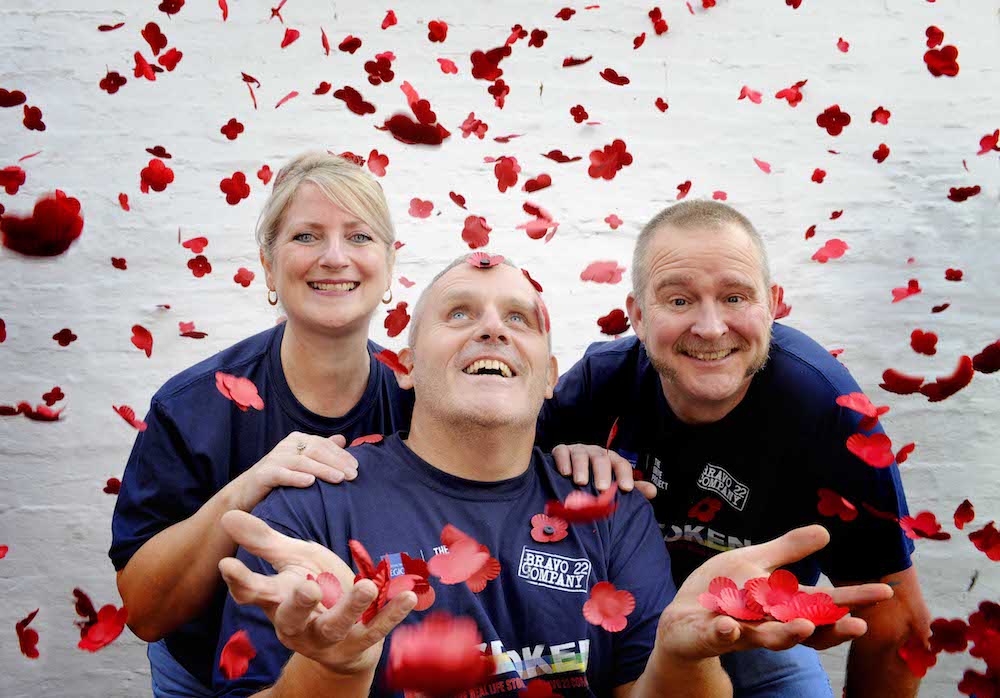 Sick and injured veterans from Bravo 22 Company, one of the most remarkable theatre groups at the Fringe, today visited Lady Haig’s Poppy Factory in Edinburgh to highlight the work of Poppyscotland.

All are taking part in Unspoken a premiere inspired by the stories of 100 ex-service men and women which runs from 21-27 August.

Among those present was the unstoppable Luke Delahunty. Paralysed from the chest down he has nonetheless become a scuba diving instructor, twice competed at the Invictus Games, won the Soldiering OnPeople’s Choice national award and recently completed a charity hand cycle ride from London to Paris.

And now he is going on stage.

It will be the second time Delahunty has been involved in shows in Edinburgh.

Back in 1991 the former RAF serviceman, who lives in Aylesbury, took part in a display of precision marching and rifle drill at the Edinburgh International Tattoo as a member of the Queen’s Colour Squadron.

His life was transformed by a motorbike accident that left him with severe spinal chord injuries and needing lengthy rehabilitation.

Nowadays Delahunty is deeply committed to spreading awareness of the work of organisations like Poppyscotland and Bravo 22 Company (a military arts based recovery programme)– and of all the things that people with severe injuries can achieve.

He said: “When this first happened I thought that the future wouldn’t be very exciting, to say the least. But I couldn’t have been more wrong.

“Coming to the Fringe with Bravo 22 Company proves the point. I’m really looking forward to this brand new experience of doing a series of shows at the world’s biggest arts festival, and in the beautiful city of Edinburgh.”

During their visit to the city Bravo 22 Company wants to highlight Poppyscotland’s life-changing work in support of the armed forces community. They see 2018 as an especially important moment as it marks the centenary of the end of World War I.

Today they met some of the disabled veterans from Lady Haig’s Poppy Factory workforce who make all Scotland’s poppies and wreaths for the annual Scottish Poppy Appeal.

Poppyscotland Chief Executive Mark Bibbey said : “We were delighted to welcome Bravo 22 Company to the Poppy Factory. It was an opportunity for our incredible team of veterans with disabilities to meet Luke and other cast members, to share stories from their time in the forces and explore some of the important issues raised in Unspoken.”

All Unspoken’s 15 cast members, who include veterans and spouses, have seen and experienced some of life’s greatest extremes.

The play, written by Gary Kitching, is a moving and funny exploration of life in the aftermath of trauma and injury.

Unspokenis set in a club where a disparate regiment of soldiers, sailors and airmen have gathered to chat, drink and watch live entertainment.

Kitching says: “Unspokenreflects theexperiences of love, loss, loneliness and hope that are the reality for sick and wounded veterans and their families. These aren’t people who want sympathy. They just want to tell their story and be better understood.

“I spoke to people all round the country and have tried to reflect their stories and experiences, characters, culture and the challenges they face. And if ever there was a time to think about how much has been endured by so many, it must be 2018 – the anniversary of the end of the First World War.”