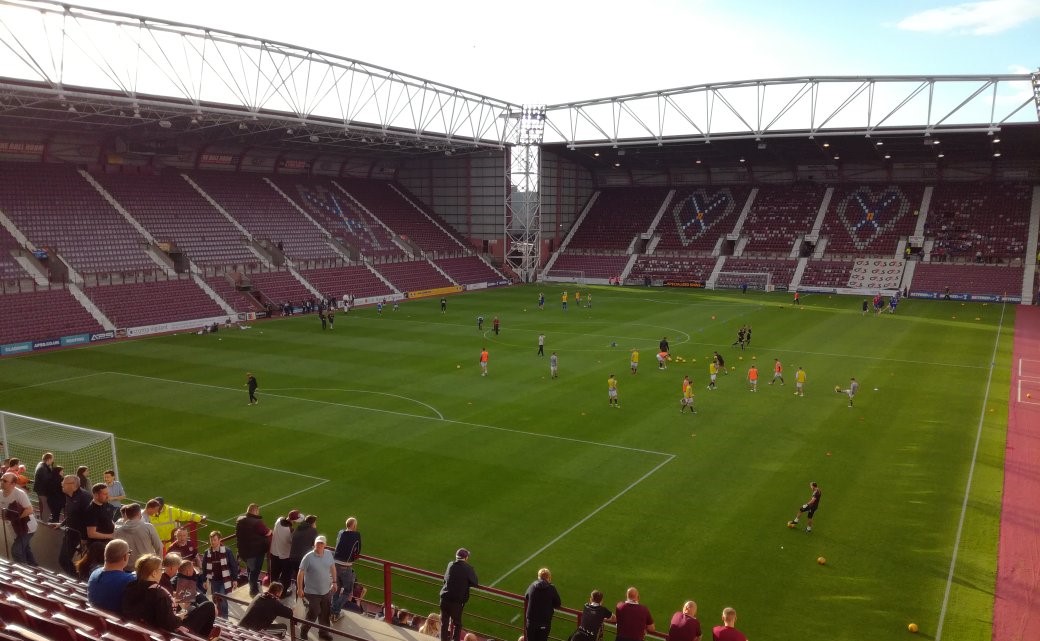 It was the proverbial game of two halves at Tynecastle on Tuesday night as Hearts put five goals past League Two side Cowdenbeath to give themselves a fighting chance of qualifying for the knock-out stages of the Betfred Cup – despite being docked two points for fielding an unregistered player in last week’s tie against Cove Rangers.

That player – Andy Irving – was in the Hearts starting eleven against the Blue Brazil, his registration issued having been resolved (hopefully). Head Coach Craig Levein made four changes to the team that struggled against Raith Rovers on Saturday. As well as Irving, Callumn Morrison, Ben Garuccio and Steven MacLean came in at the expense of Jake Mulraney, Olly Lee, Oliver Bozanic and Bobby Burns.

There was just the main stand and half of the Gorgie Stand open for the home support at Tynecastle and whether this contributed to an awful first half display from the Maroons isn’t clear. Hearts dominated possession, as you would expect against the team who finished last season as the worst in the SPFL, but all too often in that first half passes were played sideways and there long aimless balls which never looked like threatening the Cowden defence.

Hearts knew they needed to score goals aplenty to have a chance of qualifying as section winners – current leaders Inverness Caledonian Thistle, who Hearts play on Sunday, were four goals better off at the start of play on Tuesday. However, Hearts huffed and puffed in that first half and not even the sending off of Cowdenbeath’s Martin Scott for a crude foul on Christophe Berra after half an hour seemed to make any difference. The boos from the home support at half-time told their own story.

Craig Levein clearly had words with his players at the break because Hearts looked a different team and went ahead just three minutes after the restart. Steven Naismith fed Ben Garuccio whose powerful delivery into the Cowden penalty box was turned home by Steven MacLean. The relief among the Hearts contingent was palpable.

Hearts went 2-0 up in the 64th minute when substitute Uche Ikpeazu showed great strength to get past a defender before drilling the ball low past keeper McGurn into the corner of the net.

Nine minutes later, Hearts defender Peter Haring headed home Anthony McDonald’s corner before Naismith made it 4-0 from the penalty spot after McDonald was fouled inside the penalty box.

News emanated from the Highland capital that Inverness Caledonian Thistle had scored a late winner against Raith Rovers, but it meant little as Hearts know they have to beat John Robertson’s team when the two meet at Tynecastle on Sunday to progress in the competition.

But, as Craig Levein said himself after the game, if Hearts play as they did in the first half against Cowdenbeath they’ll come a cropper.

Top man: Uche Ikpeazu. Comparisons with Mark De Vries are a tad premature, but he scored a fine goal tonight.