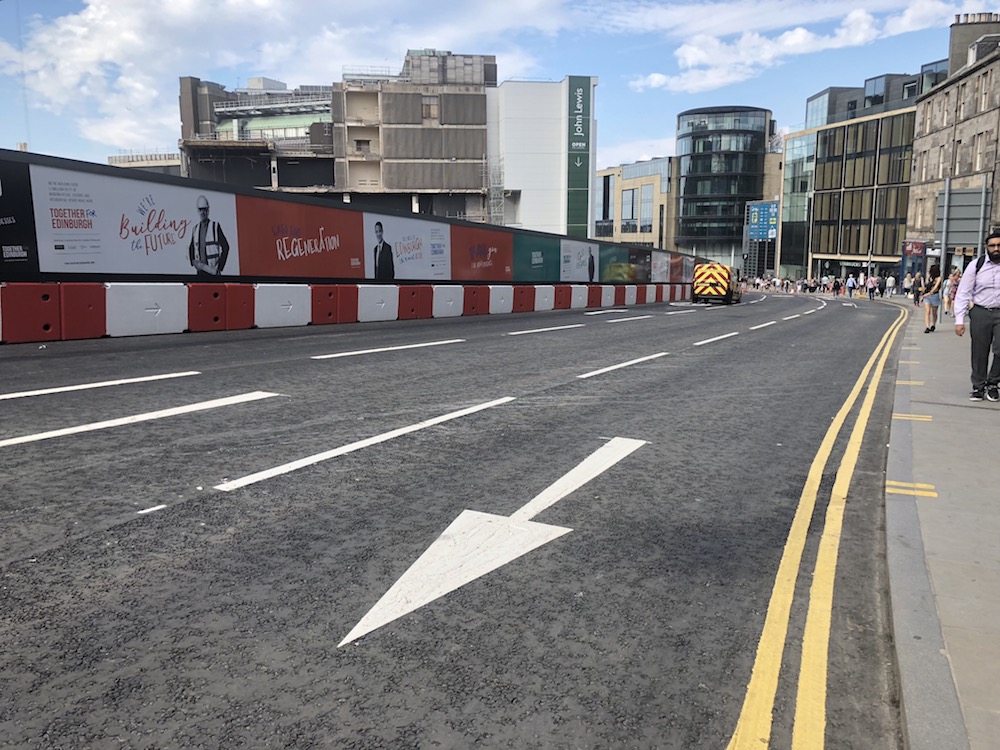 Leith Street which joins Picardy Place to Waterloo Place will reopen at 5am tomorrow as promised by the Edinburgh St James developers.

The street now has two lanes uphill and one which comes northwards towards Picardy Place where roadworks will continue for some time yet.  The street does not have a bus or cycle lane between Calton Road and Waterloo Place, and there is a marked loading bay outside the shops on Leith Street.

The newly formed segregated cycleway to the north of Calton Road will not be open for use immediately, until works further down the hill are completed. In particular the crossing at John Lewis has to be finished. But in time this should be a better place to walk and cycle as promised by the council.

When the reopening of the street was confirmed Councillor Lesley Macinnes, Transport Convener for the City of Edinburgh Council, said: “The reopening of Leith Street marks the culmination of the first phase of public realm improvements being delivered in conjunction with the Edinburgh St James project. With wider pavements and better cycling provision, the works have created a much more accessible and people-friendly thoroughfare.

“Temporary traffic management will remain in place to allow construction of the new Picardy Place road layout to continue. I would like to thank the public for their continued patience and cooperation while these works are carried out.”

On reopening we imagine the street will be a little quieter than it was before, as the St James Centre is of course demolished and Calton Road will remain closed for the time being to all traffic. But there will be buses using the route again from tomorrow morning.

It is worth pointing out that cyclists will have to use the roadway for the full length of Leith Street until further notice. If you are a cyclist you may have become used to the segregated lanes here during the road closure, and now that will change.

The loss of a segregated cycle lane during the roadworks as well as a bus lane, which gave some protection to those on two wheels, is being lamented by cycling campaigners. They say that the council should realise that a mistake has been made here, and point out that the segregated route has been used by an increasing number of cyclists during the road closure.

It is probable that cyclists will be tempted to use the two way cycleway now in place, but you should be aware that it has barriers at either end as the onward links are not yet complete. In the information issued by Edinburgh St James about the reopening, the developers said that the two lane cycleway will eventually join up with the existing infrastructure already in place on Leith Walk, and that cyclists can also make a left turn at the top of Leith Street on to Waterloo Place.

Martin McDonnell is a member of the cycle campaigners SPOKES planning team. He found out earlier today that the cycleway is not going to open (although it must be said that it was never actually promised that it would open tomorrow along with the roadway). Martin explained to us that he thinks it could easily be used right away.

He said : “Cycleways have been built alongside Leith Street, a segregated cycleway as far as Calton Road but it will be barriered off so that cyclists can’t actually ride on it. The access points, particularly the one at the north end haven’t been built into the programme. Apparently we are going to have to wait for the Picardy Place project to build a connection link to the end of the cycleway, and it can’t be used until then. It is estimated to take until the end of the year or after it to complete the work at Picardy Place. Meanwhile it is a bit of a joke that we used to have some cycling facilities and now we have none.”

With regard to the top part of the street where it joins onto Waterloo Place we asked Martin about the lack of bus or cycle lane there. He said : “We have talked to the council for many months about the need for cycling provision all the way to the top. They have told us that because of the demands of traffic they need four lanes as roadway there and that there is no room to put in a segregated cycleway.”

The road is reopened with three lanes only until work at Edinburgh St James makes further progress.  Martin concluded : “The only difficulty is at the northern end of the cycleway where it runs out into the road, and there it would be appropriate to keep a barrier in place. Cyclists would have to get off and walk across the road at the signals there.”