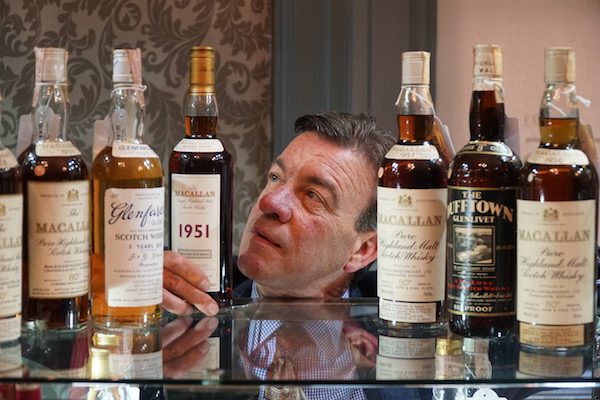 The whisky, which has been described as having the complex aroma of old English marmalade, ripe bananas, treacle toffee and fruitcake, comes in a ceramic decanter with its own presentation case. Unusually, the Dalmore Stag emblem is completely intact.

Martin Green whisky specialist told The Edinburgh Reporter told us about  the 1952 Glenfiddich which will be sold. This bottle was never actually available for sale.

He explained the story : “It was bottled for the opening of their new reception centre as it was then in 1969. Only the guests who attended were given a bottle so this rarely comes up at auction, probably only about twice in 25 years.

Martin Green of @bonhams1793 told us about one of the rare items in the whisky auction which will take place today 6 June at 11am at Bonhams Edinburgh pic.twitter.com/jm9CMhvtZ4

Recently Bonhams sold two bottles in Hong Kong for around £750,000 each. Martin told us what was so special about them. He said : “That was a 1926 60 year-old Macallan. There were two different bottles – only twelve of each were ever bottled. They were individually numbered, one with the label designed by the artist Peter Blake who did the Beatles’ covers. The other had a label designed by Adami, an Italian artist.”

The highest priced item in the auction might be one of the Macallans or indeed the Dalmore 50 year-old 1926. But the item which caught our eye was Lot 193 which comprises two bottles of King George IV. Although these were exported to Italy they were blended and bottled by The Distillers Agency Limited at their South Queensferry plant.