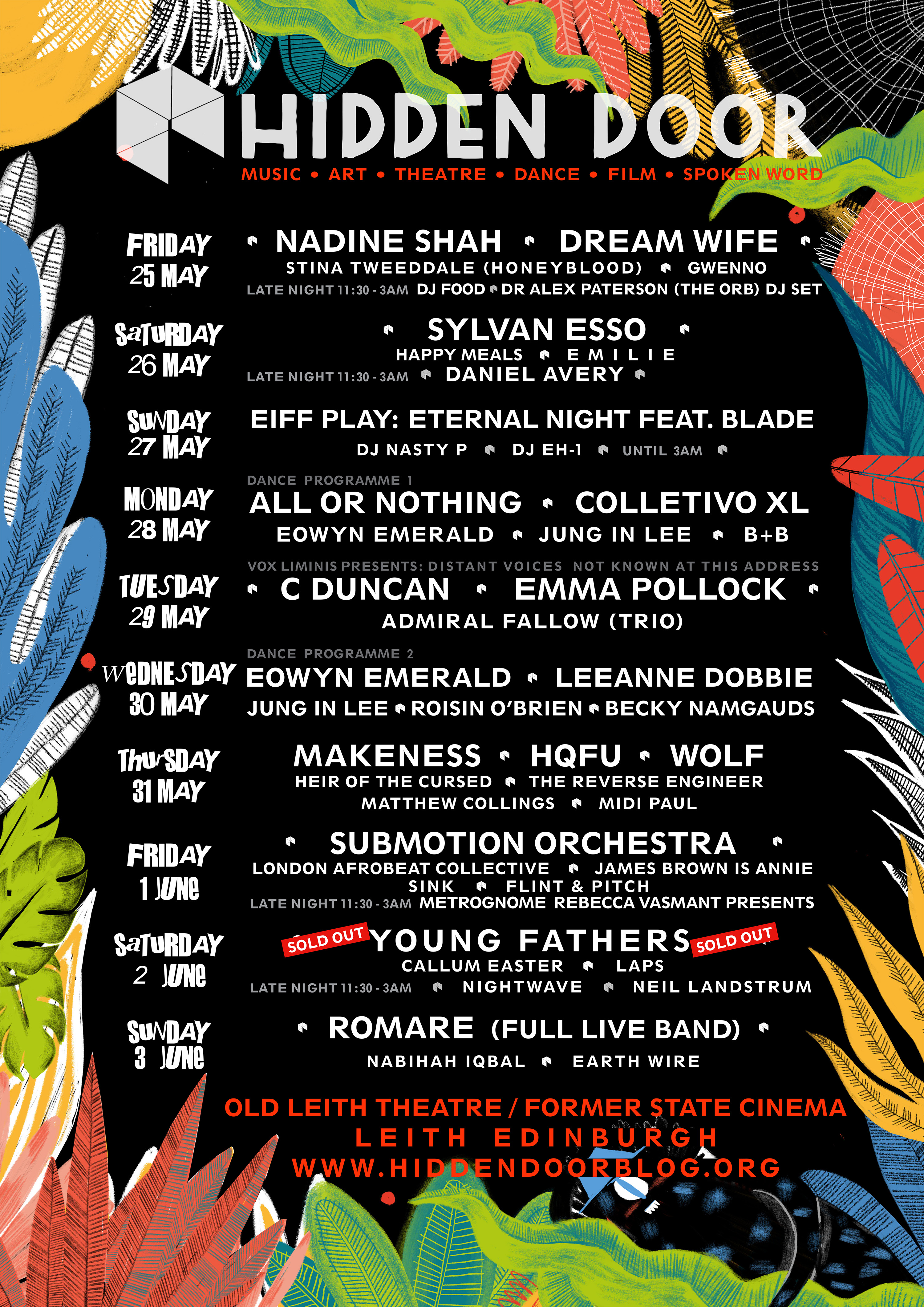 Music at Hidden Door steps up a level from previous years. A key highlight must surely be Leith’s own sensations Young Fathers, playing a heady ‘homecoming’ gig after their recent UK tour to support their new album, recorded not far from Leith Theatre. The performance is set to show what this amazing venue is truly capable of.

The opening night makes a statement of intent by featuring an all-female line-up curated by The List Magazine, bringing together the unique, powerful female voice of Gwenno, champion of Cornish and Welsh songwriting, plus Stina Tweeddale of Glasgow favourites Honeyblood, Brighton-based punk pop outfit Dream Wife and headliner Nadine Shah, whose jazz-kissed indie rock is described as a blend between PJ Harvey and Nick Cave.

Other highlights include nights curated by Edinburgh Jazz and Blues Festivaland The Skinny Magazine, with more acts, collaborations, late night programmes and DJ sets to be announced soon. The 2018 theatre programme continues Hidden Door’s ethos of supporting new and emerging work. The line-up of 12 different companies features several premieres, as well as new iterations of previously developed material. The programme is an eclectic mix, consisting of a variety of theatre formats and styles including; visual theatre, new writing, puppetry, children’s theatre and lecture theatre.

Alongside talented solo performers, we are lucky to be hosting productions by community-led theatrical groups The Golden Trailer Collective, a group of nurses and mechanics based in Central Belt Scotland, and Theatre Sans Accents, an Edinburgh-based company promoting bilingualism through theatre. Leith’s very own Village Pub Theatre will also be presenting three nights of site-specific mini plays.

Artist and performer Annie Lord will stage ‘Celluloid’, a work of lantern-illuminated lecture theatre in which cinema objects assume identities before and after use. Fiona Oliver Larkin presents ‘Salt’, a solo puppetry show examining the theme of domestic violence, breaking the silence surrounding a difficult social issue.

After receiving nearly 200 submissions, 31 artists from diverse creative backgrounds have been selected for Hidden Door 2018. The nine invited artists and 22 selected artists are united through their commitment to local communities and an international outlook.

This global focus is exemplified in Silas Parry’s ​practice, which has taken him to Japan, in residencies with Shiro Oni and Studio Kura. Rapidly changing ecology and science-fiction futures are central themes in his work, which shares its manifestly imaginative power with Julia Oborne’s colourful, playful paintings. Whilst Oborne draws upon her Thai heritage to inform the aesthetic features of her work, Josie Rae Turnbull’s time living in Ho Chi Minh City is reflected thematically in the project which she is due to present, a photo series examining ‘the private apparatus of public entertainment’ in Vietnamese theme parks.

In a night of vampire thrills, Edinburgh International Film Festival will be celebrating the 20th Anniversary of the seminal horror-thriller Blade, which stars Wesley Snipes as Marvel’s super-cool vampire hunter, with EIFF Play: Eternal Night, a special expanded cinema event staged in partnership with Hidden Door Festival and supported by Sir Ewan and Lady Brown. This visually spectacular cinematic event will feature hip hop electro beats from DJ Nasty P and DJ EH-1, and will look and feel like walking into the trailblazing film which paved the way for the Marvel universe as it exists today.

New Media Scotland will be helping us mark both the 80th anniversary of the opening of the State Cinema in Leith and the UK release of Disney’s first animated feature – Snow White and the Seven Dwarfs – by bringing the silver screen back for one very last time in a multi-sensory experience of this classic.

We have also invited Scottish Documentary Institute to screen a special look back at 15 years of their flagship training programme. Every year SDI commission up to six new filmmakers from all over Scotland to make short documentaries on a range of topics. This specially curated collection for Hidden Door showcases the freshest talent from these shores.

Hidden Door has always sought creative innovation, embodied by the renovation and occupation of neglected spaces. This core concept is mirrored in this year’s spoken word line-up – featuring 13 spoken word artists alongside a Flint and Pitch night curated by Jenny Lindsay and two comedy nights selected by Gilded Balloon.

Interrobang are set to revitalise the concept of ‘local flavour’, taking us on a visit to an alternative history of Edinburgh, via a reinterpretation of the Bible. Duo Poetry as Fuck returns to Hidden Door for a night of “regal night of intrigue, Ferrero Rocher, and murder mystery”. We are lucky to be showcasing a wealth of strong female talent featuring Iona Lee, Nichola Scrutton with Zoë Strachan, Jen Mcgregor and L.A Traynor.

Sasha de Buyl-Pisco invites us to the House of 1000 Stories as writers Kirsty Logan, Ryan Vance and Heather Parry explore the unexpected, the uncanny and the weird in an immersive event celebrating the art of the short story.

For the first time, we are featuring comedy as part of our main programme and are pleased to be working with Gilded Balloon as one of several exciting new partnerships and collaborations we have in store for 2018. Over two nights, Gilded Balloon will present a line-up of Fringe favourites as well as a showcase of new material by faces old and new.

Building on last year’s dance showcase, we are proud this year to present a full programme of critically acclaimed and powerful dance performances selected following an open call which attracted 300 proposals from around the world. From this we selected a broad range of innovative dance performance and choreographers from across Scotland as well as a number of special projects from further afield including Lithuania, Italy and South Korea.

Choreographer Janis Claxton and composer Pippa Murphy, along with four world-class dancers, present POP-UP Duets (fragments of love) – 5-minute, contemporary dance duets designed for a wide range of public spaces. Each duet is accompanied by a track of original music specifically composed for the choreography by Pippa Murphy, with vocals by Scottish Album of the Year Award winner Kathryn Joseph.

Award-winning contemporary dance company, Scottish Dance Theatre, under the direction of Fleur Darkin, will showcase their latest show, the sensual and arresting Velvet Petal. Following rave reviews from the show’s opening performance earlier this year, the performance will see the dancers philosophise, seduce and experiment with their bodies, clothing and ideas; all set to a fresh dance-punk score. International award-winning filmmaker and artist Simon Fildes presents Pilgrim; an online video installation based on ideas of journeys, loops and cycle, and brought to life by dance artist Katie Armstrong.

Elsewhere, Indonesian-Netherlands artist Claricia Kruithof’s work explores movement languages, physical memory and the effects of trauma, in a piece which will pop up in unexpected places.  All or Nothing will bring breathtaking aerial acrobatics with dance, theatre and contemporary circus on the wall at the back of the Leith Theatre stage. Glasgow-based Leeanne Dobbie is bringing a large, ambitious ensemble performance influenced by her time in Japan.