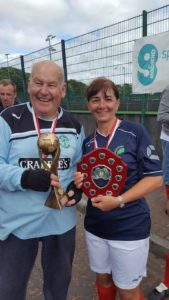 As part of International Women’s Day, Walking Football Scotland would like to encourage more women to get involved in the walking game.

There are already a few female only sessions at Aberdeen and Montrose however most of the walking football sessions across Scotland welcome both men and women.

It is unfortunate that back in the 60’s and 70’s women were not particularly encouraged to play football so very few women currently over 50 had the opportunity to play.

Girls and woman’s football is now one of the fastest growing sports in the UK and in the next few years there should be a huge growth in female walking footballers as the younger girls “mature”.

Ironically one of the early pioneers of walking football is a woman.

Back in 2012, Vivian Wallace as part of Midlothian Council’s Ageing Well team introduced walking football into their programme to persuade older folks to become more active.

Since then the Midlothian team have emerged as one of the top teams in the country and last year won the Scottish Walking Football Festival then a number of the squad including Vivian travelled to Trinidad and Tobago to do charity work. Whilst there they won a prestigious Walking Football tournament held at the national stadium.

Vivian is now a Trustee on the Board of Walking Football Scotland and along with Scotland’s only football world cup winner Rose Reilly are tremendous ambassadors for women’s walking football.