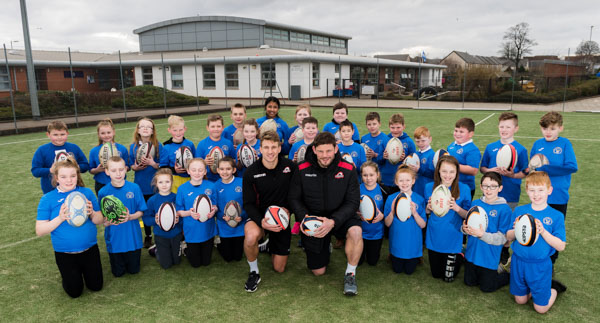 Edinburgh Rugby’s Ross Ford and Tom Brown delivered a coaching session to pupils from Broomhouse Primary School in Edinburgh in a new initiative led by sportscotland, the National agency for sport, and BBC Scotland.

Around 30 boys and girls attended the training session at the school hosted by the high-profile players, who gave the children some hints and tips as well as sharing tales from their experiences in rugby over the years in the hope of encouraging the younger generation to take up the sport.

Commenting on the training session, Ross Ford said: “Coaching the kids has been great fun. They’re all so enthusiastic about sport and it’s great to see them enjoying today’s rugby session. I hope they continue to have such passion for the game and they go on to do great things in the future” The pupils were also given an insight into the important role of sport in the media as the leading BBC Scotland radio programme, Sportsound, broadcasted their evening programme from the school.

Pupils, parents, and staff were given the opportunity to participate in a question and answer session with the sporting personalities live on-air, asking about their career highlights as well as discussing Scotland’s sporting landscape.

Broomhouse Primary also holds the sportscotland Gold School Sport Award, a prestigious national award that recognises innovation and achievement in delivering physical education and extra-curricular sport. Jamie Petrie, head teacher at Broomhouse Primary School told us: “Working in partnership with sportscotland and BBC Scotland to bring BBC Sportsound to the school is a great opportunity for our whole school community to celebrate sport.

“It gives us a chance to bring people together through sport in an innovative way and the pupils are really excited to get involved in an event like this. This is an excellent example of partnership working to improve the learning experience for our pupils.” sportscotland is building a world-class sporting system and is working in partnership with BBC Scotland to raise the profile of sport across the country. As part of this initiative, the BBC will be taking ‘Sportsound’ on the road with the help of sportscotland to give young people a memorable experience whilst engaging in sport.

Stewart Harris, Chief Executive of sportscotland, said: “At sportscotland, putting young people at the centre of our efforts is a crucial part of what we do. Working in partnership with colleagues at the BBC, we hope to raise the awareness of sport and the openings that are available. It’s fantastic that the pupils at Broomhouse Primary had the chance to train with players who have performed at the very highest level.

“Through our Active School, School Sport Awards, and Young Ambassador programmes, we hope to create closer links between physical education, school sport, and club sport which benefits young people by providing more and better opportunities to take part in sport.”