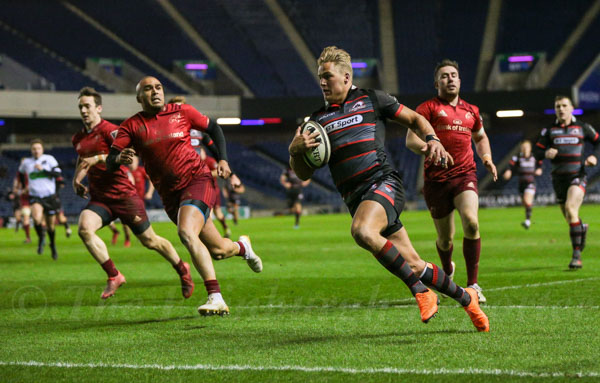 Edinburgh grind out the win back at BT Murrayfield Having decided that the ‘experiment’ of Myreside wasn’t working for them, Edinburgh Rugby returned to BT Murrayfield to face Munster in the latest round of the Guinness PRO14 competition.

With four league wins on the bounce, the home side were looking for a fifth to consolidate third place in their half of the league.

Four minutes in, and that win was looking possible. Having dominated the opening few minutes, Edinburgh had worked the ball deep into Munster’s 22 and rucked and mauled their way across the 10 metre zone. From the final ruck in the sequence, Viliame Mata picked the ball up and charged over the line for the opener. Or, at least, he thought he had….. The officials had spotted a possible infringement and, on review, deemed that he had had his feet in front of the ball when he picked up, so it was no try and a penalty to the visitors.

The remainder of the first quarter was fairly even, with both sides making and losing ground, but Edinburgh were winning the turnover game at the breakdown. However, that all broke down as Munster won a kickable penalty just before the 20 minute mark and JJ Hanrahan slotted the 40 metre kick home for 3-0. Nothing much of note happened until the 35th minute when, following his try-saving tackle of a few minutes earlier, Dougie Fife broke clear from his own 22 and launched up the pitch at full tilt. Just as he entered the opposition 22, and looking as if he was about to be caught, he got his pass away to Duhan van der Merwe who was steaming down the left touch line. In the clear, the impressive South African wing galloped over for the opening try and 5-3. His countryman, Jaco van der Walt, unfortunately missed the conversion, but Edinburgh went into the break with their narrow lead intact.

The second half started very much as had the first, with Edinburgh on the offensive, deep in Munster territory. However, Munster defended well and worked up into Edinburgh’s half where they won another penalty. Hanrahan’s kick only just made it in the swirling wind – which caused all sorts of kicking problems during the match – but the ball sneaked through and Munster took back the lead at 6-3.

From the restart, the home side lost Jason Harries to a yellow for a dangerous tackle, but this lit the blue touch paper for Edinburgh and, once they had the ball back, they hammered away at the Munster line for all they were worth. A good move left an overlap for Fife down the right and he trotted in for a ‘score’ in the corner, but, once again, the officials threw the decision upstairs and the TMO called a forward pass early in the move. So scrum under the posts for the visitors, but Edinburgh got low and destroyed the Munster scrum, winning their own penalty. Going back to the scrum, once again Edinburgh worked the ball wide – still a man down – but to the left, into the hands of ‘Man-of-the-Match, van der Merwe, and the winger duly obliged, crashing through two tacklers for his second try. This time around, van der Walt made the kick and it was 12-6 to the home side with just over 20 minutes left on the clock.

It wasn’t until the final couple of minutes that either side gained an upper hand, but Edinburgh held Munster’s attack, turning the ball over again and holding on to possession to see the clock down for their fifth PRO14 win in a row.