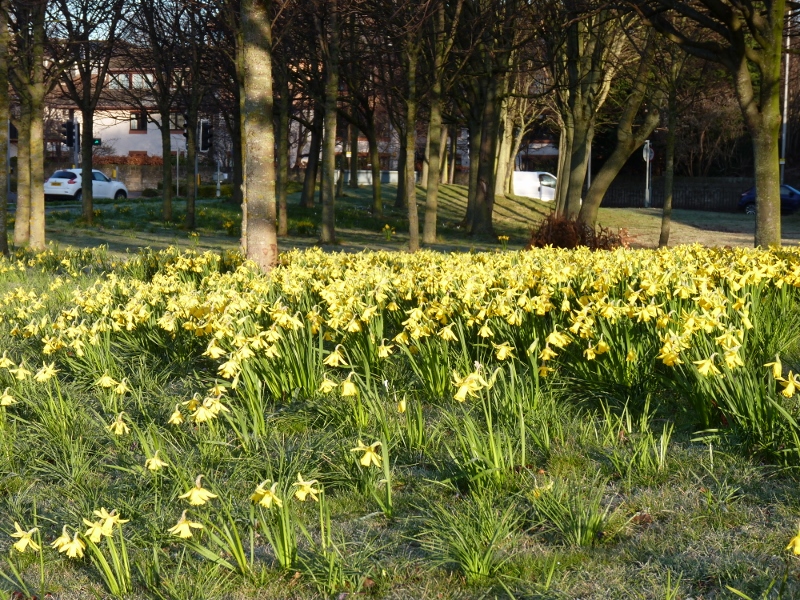 It looks as though we are going to have a cold and showery Easter weekend. There may even be more snow.  So it’s a chilling outlook for April Fool’s Day and there’s much chilling talk of only one more April Fool’s Day to go before Scotland is dragged out of the European Union against its will.

The Prime Minister Theresa May has been on a tour of the four nations of the still united UK to reassure us that Britain has a bright future as a global trading nation. She went to a tartan factory in Ayr to illustrate her message that Scottish produce would still be sold abroad.  Farmers and fishermen should not fear for their future. And there will be no “power grab” by Westminster as EU regulations are returned to Britain.

Meanwhile in Edinburgh, the First Minister Nicola Sturgeon was telling MSPs the exact opposite.  Brexit would be seriously damaging to the Scottish economy. And there was indeed a power grab going on, as Mrs May was insisting on holding onto 24 devolved powers, including controversial ones such as food standards and GM crops.

The pro-independence Scottish government found itself in an awkward spot  this week when it wanted to condemn Spain for seeking the extradition of Carla Ponsati but could do nothing to prevent it, as it is a matter for the courts. Ms Ponsati is one of the Catalan ministers being hunted down on charges of rebellion and has sought refuge in Scotland. She handed herself into my local police station in Edinburgh on Wednesday in response to a European arrest warrant. The local sheriff granted her bail (only taking away her passport) and allowed her to return to the University of St Andrews where she is a visiting professor. She has to return to court on 12th April for a further hearing on the European Arrest Warrant. But within 24 hours, £200,000 had been raised by public appeal to meet her legal costs. A homage to Catalonia indeed.

We saw a less appealing side of Scottish life on Saturday afternoon when a hit-and-run driver rammed his car into group of children walking on a pavement in the Castlemilk estate in Glasgow. Five of them were injured, one girl suffered a broken neck.  It appears that a gangland feud lies behind the attack and it was aimed at a 21 year-old man who was walking along the same pavement.

We learned that poverty is getting worse in estates like Castlemilk.  A report by the End Child Poverty Coalition predicted that child poverty in Scotland will grow from one in four children to one in three over the next 12 years.  It blames low wages and cuts to welfare benefits.  The Scottish government blames the Conservatives at Westminster for both. But we also learned this week from Audit Scotland that the Scottish government’s new benefits department has a long way to go before it’s ready for operation in the summer of 2019.  So far, the report says, it lacks sufficient funding and personnel.

The battle to save one of the last stretches of sand dunes on the east coast is not going well.  One of the principal objectors to the American Mike Keiser’s plans for a Trump-style golf resort at Coul Links in Sutherland has reached an agreement with the developers. The Scottish Environment Protection Agency says its concerns over the use of ground-water and pesticides have been overcome. But meanwhile conservationists have collected 87,000 signatures on a petition against the golf resort and the struggle continues.

There was better news for environmental campaigners trying to save Scotland’s mountain hares. The animal rights group One Kind released a video showing a military-style operation to shoot hares on a Highland estate.  The operation was perfectly legal but when the Green MSP Alison Johnstone asked Nicola Sturgeon about it at First Minister’s Questions, Ms Sturgeon said the mass killing of hares was “unacceptable”. She said the government would be consulting on introducing a licensing system to control the killing of hares.

Finally, a giant wild cat has been found roaming in the woods near Huntly in Aberdeenshire. The four-foot long animal was filmed by a field officer working for Wildcat Haven.  The charity has been monitoring wild cats in the area for the last two years but this is the largest creature they’ve seen.  It’s estimated there are only 100-300 wild cats left in Scotland, because of loss of habitat and cross-breeding with feral domestic cats.

I wonder whether, after we leave the European Union, there will be any wild cats or mountain hares left in Scotland. Or indeed any people !