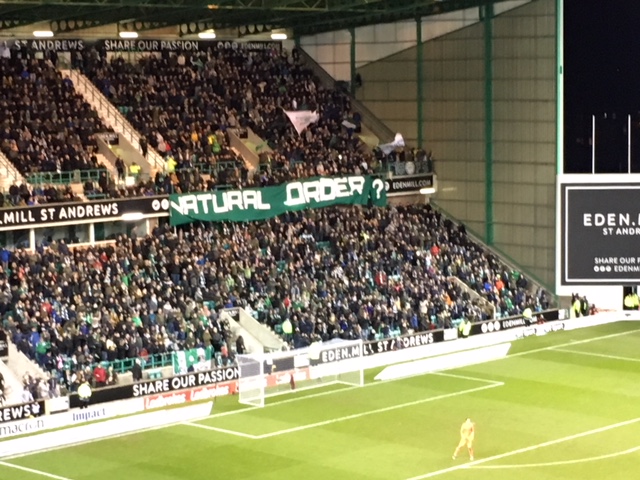 Neil Lennon made one change to the starting XI that drew 2-2 with Kilmarnock two weeks ago with goal-scorer Ryan Porteous making way for Paul Hanlon.

Christophe Berra and John Souttar who had both been doubtful due to injuries started the match much to the relief of the travelling support.

Kick off was delayed due to two smoke bombs thrown onto the pitch from the Hearts end which were eventually cleared by stewards.

Hibs had the better of the first half without creating any clear cut chances although Martin Boyle had the fans on their feet with several long runs into the Hearts half.

Referee Bobby Madden appeared to have left his cards in the dressing room as several bad challenges went unpunished.

He brought them with him for the second half however and his first action was to book Michael Smith for a blatant trip on John McGinn.

Play continued to rage from end to end before Hibs took a deserved lead in the 58th minute. Flo Kamberi knocked a throw in into the penalty box and Hanlon managed to divert the ball into the path of Allan who fired a tremendous low strike into the bottom corner of the net, sparking mayhem amongst the home fans.

A smoke bomb was then thrown onto the park from the Hibs end but this time Efe Ambrose dealt with it without the aid of the stewards.

Hibs almost doubled their advantage in the 65th minute when McLaren latched onto a superb ball from McGinn then after beating Berra, he fired a superb shot which rebounded off the underside of the bar with Jon McLaughlin stranded.

Hearts fought back and Steven Naismith had two good chances within a couple of minutes but Ambrose twice denied him an equaliser.

Allan then dispossessed Kyle Lafferty on the edge of the Hibs box then displayed some audacious skill before clearing the ball.

He was substituted moments later and left the field to a well-deserved standing ovation.

With 11 minutes remaining Hibs sealed the victory with a fantastic goal. Ambrose throw in landed at the feet of MacLaren who had his back to the goals and was surrounded by defenders. Somehow he managed to make space for himself and turned on a sixpence before firing the ball into the bottom corner of the net sparking a mass exodus from the travelling supporters.

Hibs continued to press and MacLaren and man of the match Dylan McGeouch were replaced by Steven Whittaker and Danny Swanson respectively and both received a tremendous reception form three sides of the stadium.

With moments to go, the singing section of the Famous Five Upper unfurled a banner which read NATURAL ORDER? in response to Craig Levein’s comments after the last Edinburgh derby. The banner was greeted with a chorus of ‘Are you watching Craig Levein?’

In time added on Berra missed a great opportunity to pull one back after finding himself unmarked on the edge of the penalty box but the Scotland defender fired wide of the post.

After the final whistle the players celebrated to a resounding chorus of ‘Sunshine on Leith’ from the jubilant fans.