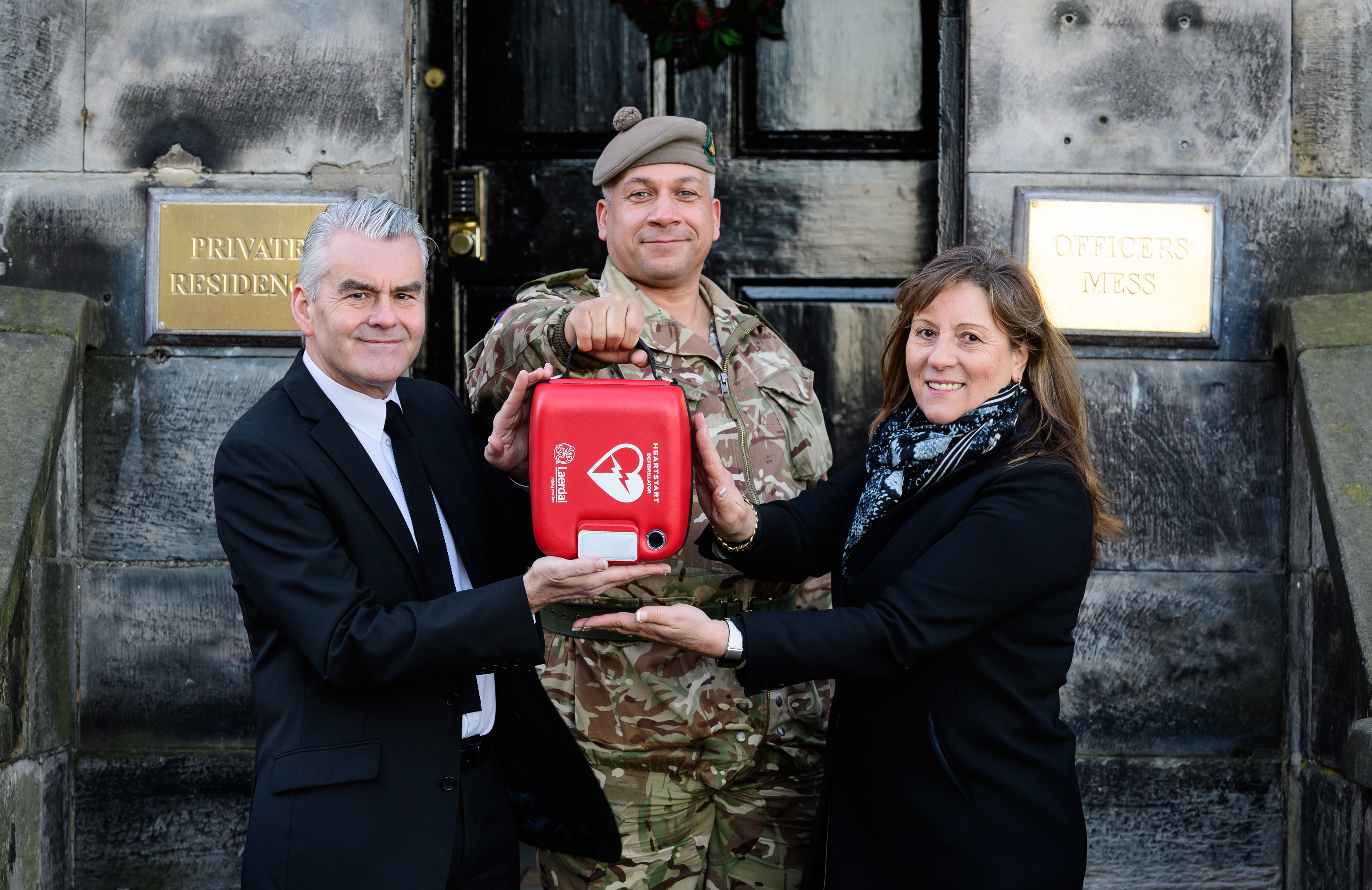 On Friday afternoon a photo call was held to celebrate the latest installations in the long running project. The defibrillators, which could prove critical in the event of a cardiac arrest, are now positioned in key locations around the major tourist attraction.

Only days after they were put in at Edinburgh Castle, one of the defibrillators was used to treat a visitor who had suffered a cardiac arrest.

The Historic Scotland and Garrison staff who used the defibrillator had been trained in its use the morning before at a St John Scotland CPR and defibrillator training session within the castle.

The St John and the City Public Access Defibrillator Project is managed by St John Scotland’s Edinburgh committee and was launched on 31 August 31 2016 by former Lord Provost of the City of Edinburgh, Donald Wilson, at a Civic Reception in the City Chambers.

The project, which initially aimed to install twenty Public Access Defibrillators in the first year, has gone on to place around 123 life-saving machines across the city, including one on each of the 27 Edinburgh Trams. In the past twelve months, five of the defibrillators installed under the scheme have been successfully deployed, saving four people who had suffered from cardiac arrest.

The framework underpinning the St John and the City project is key to its success. It creates local partnerships with three key groups of participants: Donors, Hosts and Guardians. Businesses, voluntary organisations, civic institutions and individuals – known as Donors – provide funding for the defibrillators.

Donors who provided the funding for the three defibrillators within Edinburgh Castle are St. James’s Place Wealth Management Edinburgh, Newtyne Consultancy and Training Limited, and Paul Burns, who survived a cardiac arrest at the Hibs Training Ground and went on to raise over £12,000 for St John Scotland.

One of the public access defibrillators will be available for 24/7 usage on the esplanade, while the other two will be located within the Castle and Garrison offices; one beside the One O’Clock Gun at the Officers Mess and one in the security office at the main entrance.

Lieutenant Colonel Alan Johnson, Commanding Officer of 105th Regiment Royal Artillery said: “We are really proud to support St John Scotland in this important project.  Public access defibrillators can be life-saving.  They complement the work we are doing with St John Scotland to spread CPR skills in our communities by training Army Reservists in CPR and cascading that training to members of the public.”

Angus Loudon, Executive Director of St John Scotland said, “Every year, this iconic landmark welcomes well over a million visitors from all over the world. Although giving early CPR is critical to cardiac arrest survival, having quick and easy access to a defibrillator boosts the chances of survival further.

To have these life-saving defibrillators in Edinburgh Castle will give visitors and staff alike peace of mind that they are available should they be required. We are delighted that our fantastic Donors have joined forces with the St John Scotland Edinburgh Committee to make this possible.”