Brendan Brooks claimed two goals as Braehead Clan skated to their fifth win in all competitions over Edinburgh Capitals.

Brooks, a former Fife Flyers star, netted in the first and late in the third periods as Clan won 3-1.

Capitals, however, continue their nightmare season and the Elite League bottom-markers have now lost their last nine league fixtures.

Earlier, Brooks opened the scoring after seven minutes with a short-handed goal with one of his team-mates in the sin bin.

Former Capitals and Dundee Stars forward Bari McKenzie edged the visitors ahead for a second time after 38 minutes.

Brooks claimed his second 1min 20sec from time on an empty net after Capitals withdrew their netminder to give themselves an extra skater. 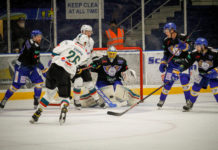