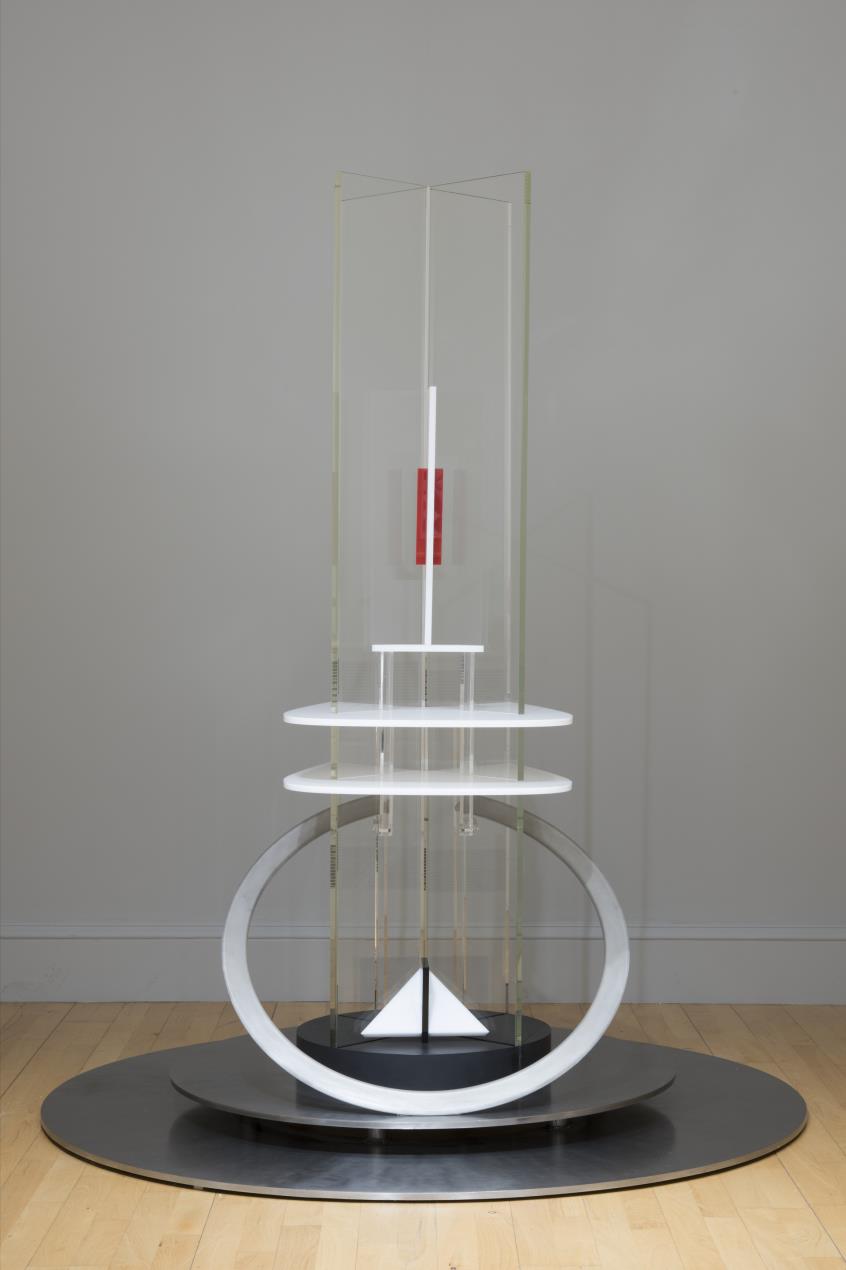 A glass, perspex and stainless steel sculpture by the Russian artist Naum Gabo (1890-1977) has been acquired by the Scottish National Gallery of Modern Art in Edinburgh.

The work has been gifted through the Arts Council’s Cultural Gifts Scheme by Graham Williams on behalf of himself and his wife, the artist’s daughter Nina Williams.

This scheme allows a gift to be made in lieu of tax, and the tax reduction in this case will be £255,000.  This scheme is regarded as a way of encouraging philanthropy for the arts, and is administered by the Arts Council. The reduction in tax relates to up to 30 per cent of the value of what is donated.

Gabo was born in 1890 in Russia. He studied medicine, then physics and engineering in Munich.

At the start of the First World War he moved to Norway, where, inspired by new scientific thinking about time, space and matter, he began to make sculpture out of card, sheet metal and, later, new kinds of transparent plastic. Instead of modelling or carving, he created a completely new kind of sculpture, which is glued or screwed together, and which the viewer can literally see through.

He proclaimed: ‘We construct our work as the engineer constructs his bridges, as the mathematician his formula of the orbits’. This approach, which  became known as ‘Constructive art’, exercised an enormous influence over the development of modern sculpture.

In 1921, when he was living in Russia, Gabo made preliminary designs for Column, with the idea of making it into a giant public sculpture, towering over the hills near Moscow. Moving to Berlin in 1922, he made the first in a series of small, three-dimensional models, using glass, metal and plastics. Gabo made a number of preliminary models of Column: the earliest, dating from 1920-21, is now in Tate, London. In 1922-23 he made a larger version, just over a metre tall, in glass, painted metal, wood and galalith – an early kind of plastic. He wanted to make a much larger version, but the types of glass available at the time were unsatisfactory, having green edges. Gabo kept the project in mind, waiting for the creation of new materials which would help him to realise his ambition.

Gabo moved to London in 1936, forming close friendships with artists Henry Moore, Ben Nicholson and Barbara Hepworth. From 1939 to 1946 he lived in St Ives, Cornwall, becoming a key figure in the St Ives art group.  He moved to America in 1946, settling in Connecticut, with wife Miriam and daughter Nina. He subsequently took US citizenship. Nina returned to England in 1964.

By the 1960s, Gabo was recognized as one of the most important and innovative artists of the twentieth-century; exhibitions of his work proliferated. In 1970 he had an exhibition at the Louisiana Museum of Modern Art in Humlebæk, Denmark, and the idea of making Column on a larger scale resurfaced. Discussions led to the discovery of a new kind of glass, which was strong and completely transparent and colourless, being made by Pilkington Brothers in England. On seeing it, Gabo wrote: ‘I never dreamt that such a beautiful, crystal-clear sheet of glass can now be produced’.

In 1973 Gabo sent a small model of Column to Denmark, for the new, larger work to be made. The glass came from Pilkington’s and the other parts were made in Denmark to Gabo’s specifications. Two examples of the sculpture were made: one for the Louisiana Museum of Modern Art and another that Gabo gave to his daughter, Nina, who gave it to her husband Graham.  That second example was placed on loan to the Scottish National Gallery of Modern Art in 2016 and has now been gifted, by Nina’s husband, Graham Williams, through the Cultural Gifts Scheme. It joins two smaller works by Gabo already in the collection: Construction through a Plane (c.1937) and Spiral Theme (1941).

Column is on display at the Scottish National Gallery of Modern Art (Modern One), alongside paintings by Pablo Picasso, Lyubov Popova, Fernand Léger and Georges Braque, all dating from the same period, around the early 1920s.

Speaking of the acquisition, Simon Groom, Director of Modern and Contemporary Art at the National Galleries of Scotland, said: “We are delighted that this extraordinary and innovative sculpture has joined our collection. It has been on loan here for nearly two years and has been much admired. We are deeply grateful to Graham and Nina Williams, the artist’s son-in-law and daughter, for their generosity, as well as to the Scottish Government.”

Edward Harley, Chairman of the Acceptance in Lieu Panel said: “Column by Naum Gabo occupies a significant place in the history of modern sculpture. I am delighted that this important work has joined the Scottish National Gallery of Modern Art’s impressive holdings of 20th century art and is the first cultural gift to enter the collection.”