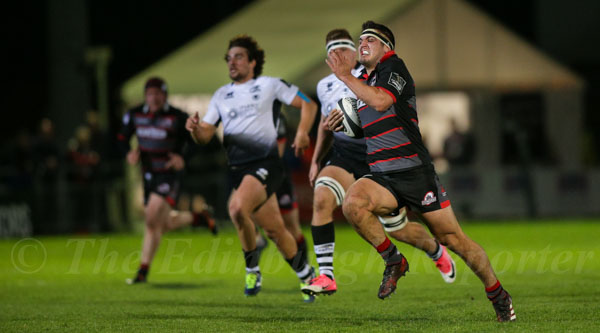 After three straight defeats, the crazed tones of Senna the Soothsayer* must have been heard echoing around the corridors (corridor?) of Myreside uttering her infamous catch phrase “Woe! Woe! And thrice Woe….!” as Edinburgh faced up to the task of defeating Zebre – who the previous week had stunned Ulster – at home in the latest round of the Guinness PRO14.

And it was a fine first few minutes from the visitors as they pinned their hosts back deep inside home territory. However a lineout steal got the ball away from immediate danger, but Zebre, as was to be their go-to play, ran the ball straight back into the home defence.

A series of three penalties then gave Edinburgh the advantage and, failing to capitalise on the first two via line outs, they chose to go for goal, Jason Tovey slotting home the kick for 3-0 after nine minutes.

A couple of minutes later, Zebre had a chance to equalise from a, seemingly, easy kick, but scrum half, Marcello Violi squirted the ball wide and Edinburgh stayed ahead.

Edinburgh nearly got clear as Tom Brown chased down a clearance, but Zebre regained possession and worked the ball clear. As the 20 minute mark approached, Zebre closed in on the home 22 with a fine passing and running play, which ended with flanker Johan Meyer, sprinting down the line from a fair way out, breaking a couple of tackles and going over in the corner for the first try of the match. Once again, Violi failed to convert, but Zebre now lead by 5-3 and were looking less like their perennial underdog status as the match progressed.

That all changed as Edinburgh began to find their feet and pressurise the visitors’ defence, with flanker, Magnus Bradbury and hooker, Stuart McInally – sporting some tightly wound protection over his damaged ear – making a couple of strong runs. The home side managed to penetrate the Zebre 22, but the ball was, again, turned over and cleared to half way where another Bradbury/McInally combination lead to Edinburgh’s next score. Bradbury collected the clearance and barged through a couple of tackles and into Zebre’s half, setting up a ruck, from where McInally ended up with the ball and charged for the line – from around 50 metres out. As everyone was looking for the intercepting tackle, it was realised that the hooker was managing to stay clear and he galloped across the line to dot down behind the posts. Duncan Weir was, by now, on and he stepped up to knock over the conversion and, with just over 10 minutes of the half left, it was 10-5 to Edinburgh.

The remainder of the half was played out dangerously close to the Edinburgh red zone, at times, but the home side held out and the match went into the break with the home side 10-5 ahead.

The first 10 minutes of the second half were a series of stalled moves and half breaks which lead nowhere – although play was stopped at one point to allow, what looked like, a serious injury to to be tidied away – until around the 50-odd minute mark when a fine passing and offloading move from the visitors nearly netted them their second try, but wing Tom Brown, ran down his opposite number, Mattia Bellini, a short distance out with a try-saving tackle near the touch line.

The following 10 minutes were once again a series of bogged down moves – apart from a fine 50+ metre break by wing, Douigie Fife which saw his kick through almost gathered by Brown in the left corner – as both sides probed for territory. Weir did score a 58th minute penalty to open the gap to 13-5, but it was Zebre who scored the next try. Edinburgh’s go-to clearing play was scrum half, Nathan Fowles’ box kicking ability, but that all came undone when his opposing scrum half, Violi, charged him down inside the home 22 and then gathered the loose ball to trot in for the try. He then converted to bring the Italian side up to within a point at 13-12.

The rest of the match was a fairly nondescript affair, which, apart from an exchange of penalties from, first Violi to take the lead, and then from Weir to retake the lead, finally finished with Edinburgh holding on for their first win in four matches with 16-points to Zebre’s 15 and netting fourth in their Conference with nine points.