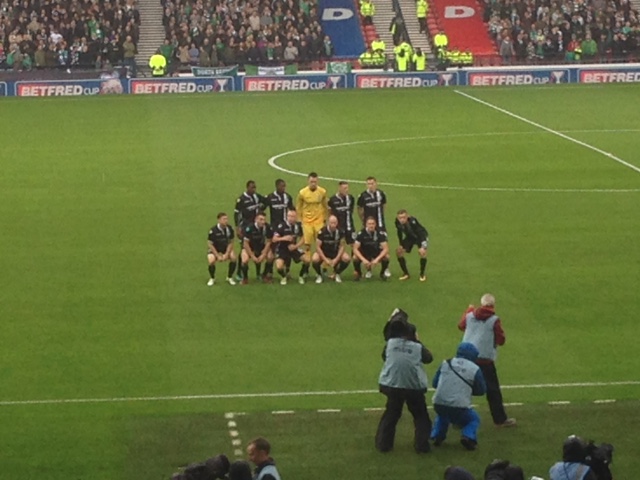 Despite a brave performance, Hibs lost out to champions Celtic after a pulsating 90 minutes at Hampden Park in the Betfred League Cup semi-final this afternoon.

Neil Lennon made two change to the starting XI that lost to Aberdeen last weekend with skipper David Gray taking over at right back from Steven Whittaker and on-loan Manchester City winger replacing Martin Boyle.

Ross Laidlaw retained his place despite first choice keeper Ofir Marciano being available after missing the last two games due to Yom Kippur and the birth of his son.

Hibs looked nervous in the opening minutes but almost took the lead when Barker hit the side net from an acute angle.

Celtic took the lead in the 14th minute when Stuart Armstrong’s cross was deflected by Efe Ambrose into the path of Mikael Lustig who fired the ball past Laidlaw from close range.

The champions then controlled possession but an incredible 80 yard run from Barker who picked up the ball in his own penalty area had the Hibs fans on their feet.

Celtic grabbed a second in the 41st minute when Leigh Griffith’s corner evaded all the Hibs’ defenders and Lustig volleyed home at the back post.

Lustig was then booked for a challenge on Ambrose who required treatment.

Kieran Tierney almost made it 3-0 when his shot from the edge of the box struck the outside of the post.

Hibs pulled one back in the 58th minute when Dedryck Boyata brought down Boyle inside the area and Anthony Stokes sent Craig Gordon the wrong way from the resultant penalty kick.

Seven minutes later Celtic restored their two goal advantage when James Forrest cut the ball back to Scott Sinclair who mishit his shot into the path of substitute Moussa Dembele who slotted the ball into the net from close range.

Dylan McGeouch found Whittaker who slotted a superb through ball into Shaw’s path and the youngster calmly rolled the ball past Gordon into the net.

Hibs pressed forward but Celtic always looked dangerous on the break and Laidlaw did well to save from Dembele who was clean through on goals.

With two minutes remaining, a long ball from Gordon fell between McGeouch and Laidlaw. The goalkeeper kicked the ball upfield but it landed at the feet of Tom Rogic who slid the ball to Sinclair who was in an offside possession.

Sincair ran toward the ball but left it for Dembele who fired past Laidlaw into the net and Celtic held on for a deserved 4-2 victory.

The Hibs’ fans gave their team a standing ovation for their efforts at full time.