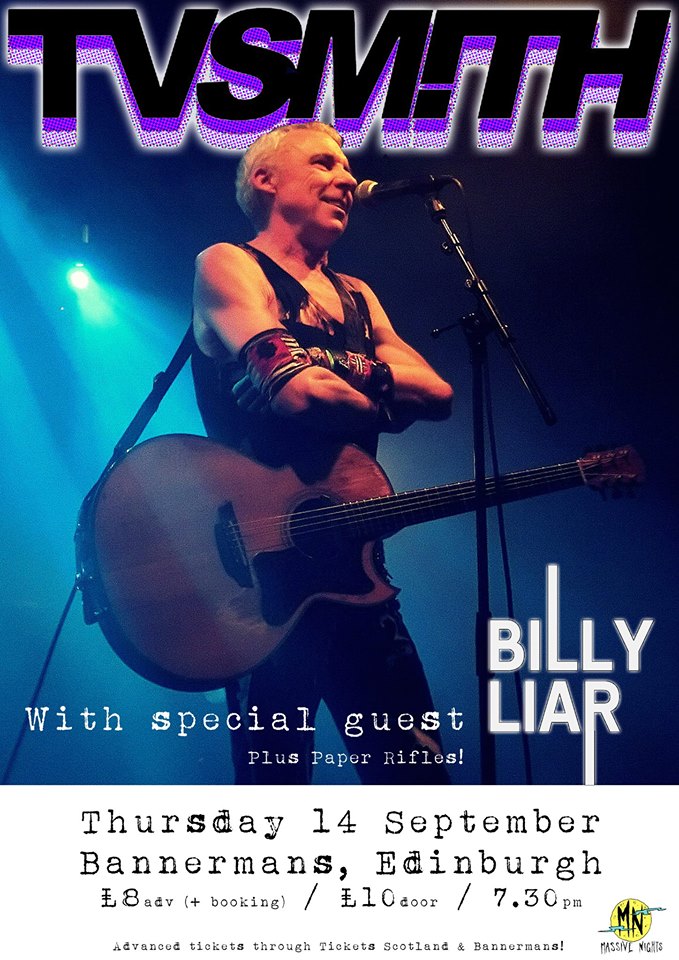 TV Smith is coming to Edinburgh, which means you have the chance to spend the
evening with somebody who is a punk legend. But on top of that he is a witty and talented writer and allegedly one of the most giving and kind people you are likely to meet in today’s cut-throat music business.

For those who don’t know, TV is the former singer and songwriter of The Adverts, who were an original member of the London punk scene in the late 1970s.

The band was most famous for the songs Gary Gilmore’s Eyes, Bored Teenagers and One Chord Wonders.

For my money, their debut album, Crossing the Red Sea with the Adverts, is one of the finest long players that came out around that time and sums up exactly what was going on at the time.

After the Adverts went their separate ways, TV continued in TV Smith’s Explorers until 1983, when he released his first solo album, Channel Five.

He then formed Cheap, who despite touring for five years and at least one Peel Session, failed to find a label willing to release their album RIP… Everything Must Go!, which was released after John Peel’s death.

TV has toured all over the world since the early 1990s, both solo and with backing bands, managing to release nine albums and five books of tour diaries in between gigs.

Most recently, TV released The Alternative Top 50, a book presenting fifty of his best songs as poetry, with an extensive foreword by Henry Rollins.  Talking to him, it’s obvious that he is happy with the book and is quite rightly proud of it.

Andy Vella, who is known for his work with the Cure, designed the beautiful layout and each song or poem is presented in a different font.

As TV has said, “the words run free across the page, unexpected nuance and meaning exposed, shouting loud and proud their new purpose – no longer are we song, now we are poetry.”

Life for TV these days is touring and he reckons he does on average 130 gigs a year.  He says performing is the best way to get your music across, to put it out in front of people.

For TV, “Life for me now is touring.  I don’t have a schedule or a routine, I just play where and when I want.  There’s no schedule or routine to it, it all just comes together under a do-it-yourself approach.

“The current run of gigs starts in Edinburgh because of Billy (Liar, who’s supporting him at Bannerman’s).  Billy’s supported me several times and he kept saying we should do a show in Edinburgh and now the time is finally right.

“I don’t have a label or a publisher so this is how I make my living, presenting my music in its purest form.  Don’t get me wrong, I enjoy playing with my band (the Bored Teenagers), but when I’m touring with them I miss playing solo.  With a band, you have the same set list every night and you need time to rehearse new material.  Playing solo though, I can be as spontaneous as I feel like, or as much as the crown and venue allow me to be.  I can choose what I play, try out new songs, play for anything between forty minutes and three hours, plus enjoying a bit of banter with the audience.”

TV’s last album, I Delete, came out in 2014 but he’s hoping to release a new one in the New Year.  “I think this probably the best material I’ve ever written but at the moment it’s just finding time to record it in between the gigs.  Between now and the end of the year I’m in Germany and Ireland, plus playing throughout the UK.  Any spare time I have, I’m in the studio at home, recording the songs and making sure they sound as good as
possible.  I’m hoping the new one will come out in the Spring but as with all things, you can’t do it all.”

On that subject, I asked TV about his tour diaries; he’s released five volumes so far but sadly these interesting and amusing insights into life on the road are currently unavailable.   He would love to write more and give us further tales of the emergency sandwich but time pressure doesn’t currently allow it.  “I’ve got to sleep sometime!  Plus, the diaries take up room and there’s no space in the luggage for them.”

Before I finished the interview I had to ask about how people now view punk and his compatriots from the seventies.  There’s still a great deal of love for bands and performers from them by many, myself included.

Sometimes though I worry.  Is it all down to nostalgia or has the songs’ energy and power kept people coming back to them.  “No, it’s not nostalgia; if it was you wouldn’t have new people coming to the gigs or listening to the music.  Let’s face facts, people are listening to the stuff we made then whose parents hadn’t even met when the songs were released.  There’s  a fantastic power and energy from that time.  If you look back at that era, there was a huge amount of originality and spark in the music and the bands.

“Sadly, business and celebrity – everything that we were fighting against – overwhelmed this incredible creative scene.  Now it’s just profit margins, return for shareholders and getting one of the label’s songs featured on the likes of X-Factor.

“All that side of music sickens me, but I never gave up and I’m still out there forty years later, performing and showing new musicians that there is an alternative.  You see these really talented people who just don’t get the break or the chance they should; there is definitely less of a support network for them but they can do it.”

TV’s opinion of the celebrity cult our society has developed is obvious and while he still believes in the punk ideal, he knows what he’s up against in the industry and the media.  He added : “You see these people coming through, a manufactured ‘product’ that has no substance; it’s like the record companies are trying to build castles out of dust.  I find it deeply depressing.”

Thankfully, though, there are still people out there fighting the good fight and playing damn fine, original music at the same time.  TV Smith is definitely one of them; not a three-minute hero, more of a forty-year wonder.

Support is from Billy Liar, one of Scotland’s most articulate singer-songwriters, and Paper Rifles, who burst onto the scene two years ago from the ashes of the Curators.