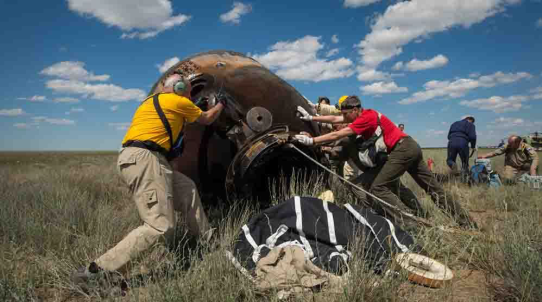 The spacecraft which Tim Peake used to come back to Earth on 18 June 2016 is being brought to Edinburgh and will go on display at the National Museum of Scotland.

The Soyuz TMA-19M weights 1.5 tonnes and brought the British astronaut back from the International Space Station after six months when he entertained us with his fabulous photographs of Earth, and during which he ran a marathon.

Dr Gordon Rintoul, Director of National Museums Scotland said: “We are delighted to be able to give our visitors the rare opportunity to see this spacecraft up close. The subject of space travel carries a universal and enduring fascination, and to have the chance to view an object which has transported astronauts safely back to Earth from space – enduring temperatures of around 1,500 degrees Celsius as it passed through the atmosphere – is truly awe-inspiring.”

Tim Peake said: “I’m particularly happy that people up and down the UK now have the opportunity to discover more about my Principia mission and space travel, and that the Science Museum Group – with the support of Samsung – are doing so much to inspire the public and schools in this tour.”

The Soyuz TMA-19M is the first flown, manned spacecraft in the UK’s national space technology collection. Its display in Hawthornden Court at the National Museum offers visitors the unmissable chance to see it up close; complete with its 25-metre parachute and scorch marks from its re-entry through the atmosphere.