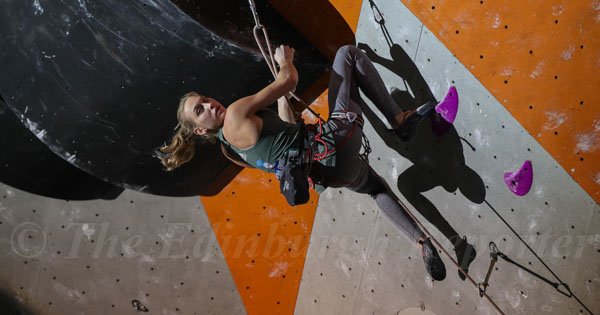 If any sport that knows how to build tension in the spectators, then climbing, and especially Lead climbing – is that sport. The athletes – and that’s what they are – start on a relatively easy section, but as they ascend, the difficulty is ramped up, and not only because the wall, eventually, ends up parallel to the floor! All to be climbed in under six minutes.

The first podiums were decided on Sunday in Speed. Ludovico Fossali of Italy knocked Russian Vladislav Deulin out of contention in the quarterfinal, matching the season leader step for step until Deulin slipped high up on the wall. Fossali then tied Aleksandr Shikov in the semi-final, forcing a rerun. He saved five hundredths of a second in the second race to advance to the big final against Stanislav Kokorin, competing in his 55th IFSC World Cup. A false start from Kokorin handed Fossali his first victory. Fossali’s compatriot Leonardo Gontero bested Shikov in the small final in another close match to complete the podium. In the women’s final, Mariia Krasavina kept her teammate and season leader Iuliia Kaplina of Russia out of the gold medal race. Anouck Jaubert posted her fourth time of the weekend under eight seconds in the big final against Krasavina, extending her winning streak to three and coming within 9 points of Kaplina in the season rankings. Kaplina rounded out the podium by beating Anna Brozek of Poland in the small final with a fast time of 7.68 seconds. For full Speed climbing results, please click here France’s Mathieu Besnard, winner of the first Paraclimbing Cup this season in Briançon, and world champions Elodie Orbaen of Belgium and Maureen Beck of the United States continued their winning ways in the RP categories (limited range, power or stability). Mor Michael Sapir and world champion Nive Porat also competed in the RP categories and earned two hardfought gold medals for Israel. In the visual impairment categories, both Tanja Glusic of Slovenia and Italian Matteo Stefani impressed the audience in Edinburgh. Respectfully quiet while the sight guides on the ground communicated with the athletes, the crowd erupted with applause when Glusic and Stefani marched past the previous high points. Briançon winner Kevin Bartke of Germany was the only forearm amputee to top every route, and Julien Gasc of France bested a strong field in the leg amputee category. For the full Paraclimbing results, please

click here.Desgranges and Garnbret return to the top An exciting Lead final concluded the action in Edinburgh. Stefano Ghisolfi, Jakob Schubert and Domen Skofic all fell at the same place on the towering Lead wall, putting forth good fights that energized the spectators. The man none of them could catch was season leader Romain Desgranges. After missing finals at IFSC World Cup Arco, Desgranges rebounded by setting an unmatched high point in Edinburgh, falling just one move shy of the upper panel for his third victory of the season. The women’s route was instantly challenging, with mostly volumes at the base of the climb and a complicated crux sequence before the headwall. Jessica Pilz was first out and set a formidable high point, falling at the penultimate hold. Ashima Shiraishi fell one move below Pilz and missed the podium when Jain Kim of Korea added-on positive movement at the same spot. As so often this season, Janja Garnbret concluded the event with a thrilling performance. The Slovenia star executed the extended moves, heel-hooks and toe-hooks at the crux section to match Pilz’s mark and take home the gold medal on countback to semi-finals. It was her fourth victory of the Lead season. Great Britain’s own Hannah Slaney competed in her first IFSC World Cup final in front of the home crowd, and the 17-year-old athlete finished in 7th place. For the full Lead climbing results, please

click here.Images from the events will appear here over the next few days