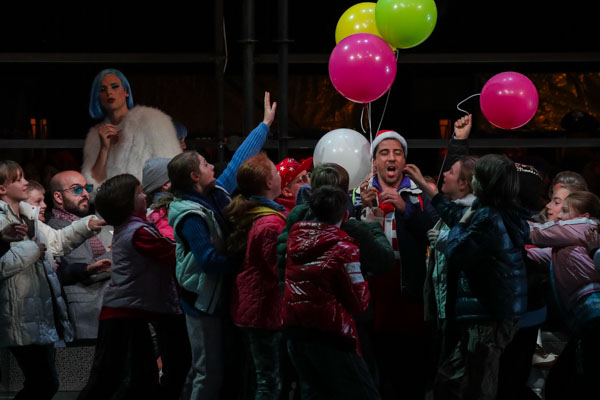 This evening from 9 o’clock there will be a large fireworks display set off from Edinburgh Castle in the customary end to the biggest arts festival in the world.

£4.3million of tickets have been sold which sets a new box office record.

Over 2020 artists from over 40 countries performed at this year’s Edinburgh International Festival with some of the moments from the first festival revisited such as Macbeth and individual artists who have been a part of those in years gone by.

The Festival opened with two nights of the Standard Life Opening Event : Bloom and drew towards its close with the unveiling of a plaque commemorating the first Festival Director Rudolph Bing and conductor Bruno Walter who were both Jewish refugees.

With music ranging from La Boheme to Jarvis Cocker and Karine Polwart alongside R.E.B.E.L. at Castlebrae Community High School this was a wide ranging festival to mark the important anniversary.

Festival Director, Fergus Linehan said: ‘As the curtain falls on the 70th anniversary International Festival we are struck by the generosity, enthusiasm and endless curiosity of Festival goers from Edinburgh and all over the world.  We are hugely grateful to them and the thousands of artists who have lit up our stages and streets over the past month’.

Councillor Donald Wilson, Edinburgh’s Culture and Communities Convener and Festivals Champion, said: ‘It has been a record-breaking summer in Edinburgh and together the events formed one of the most collaborative and creative programmes in the International Festival’s 70-year history.

“This really has been a summer to mark all summers and a celebration of Edinburgh, its people, and of courses the many performers and talented individuals who join us year upon year, decade upon decade. I don’t think there is an atmosphere anywhere in the world that comes close to Edinburgh in August.

“Thanks must go to everyone who made this year’s International Festival such a great success, the many people working hard behind the scenes to keep the city moving and looking its best, and the tens of thousands of visitors to Edinburgh. Thank you for celebrating with us.’

Cabinet Secretary for Culture, Tourism and External Affairs, Fiona Hyslop, said: “In its 70th anniversary year the Edinburgh International Festival has brought compelling and significant work to challenge and captivate residents and visitors against the spectacular backdrop of our capital city. The International Festival contributes strongly to Scotland’s culture and economy and is key to the growth of our tourism and creative industries.

“I am proud to support its continued growth through the Expo Fund, the £10 million we will contribute towards a new Edinburgh performance venue, and the extra £5 million we will invest in Edinburgh’s major festivals over the next five years.”