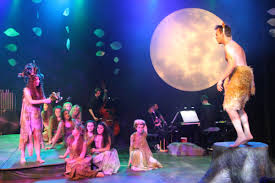 Originally created for the Tonbridge Arts Festival in 2006 and sumptuously set in the halcyon age just before WWI, Jeremy James Taylor ‘had long wanted to make a musical version of Shakespeare’s great play’, A Midsummer Night’s Dream. He commissioned Howard Goodall and Charles Hart (Bend It Like Beckham, The Musical; The Kissing Dance) to create the music and lyrics.  VIVA! and Kings Ely invited him to direct this 2017 production which is currently showing at the Hayward Theatre, Ely and about to be taken to the Edinburgh Fringe.

Beautifully choreographed by Jess Clifford and Chris Cuming, the Woodlanders form a dark, edgy, energetic, menacing, almost Lord of the Flies entourage to the Oberon and Titania characters, Angel and Sylvia.  The boys and girls taunt, tease and tug at Jack, the blacksmith’s boy, until jealous Angel wins him from Sylvia and tasks him with finding the flower to make a love potion with which to punish and bewitch her.

In pleasing contrast we meet the buffoonish villagers whose vicar (a splendid David Tickner) impatiently chivvies and harries them to rehearse a production of George and the Dragon to entertain Lord Melstock on Midsummer’s Night. On their way to a moonlit hill, Nick Cheek (played superbly by Ben Clark) loses his way and is turned into the goat with which Angel causes Sylvia to fall in love.

Upper class toff David (the suitably bumbling Daniel Lane) did love Jennifer but is now enamoured of Charlotte (Riley Williames) however she has eloped with Alexander (Joseph Beach) and David is pursuing the lovers.  Jennifer (a convincing Zara Minns) still loves David and is chasing him through the woods but mayhem ensues when Jack tries to bring David and Jennifer back together.  He uses the potion on both men, their eyes alight on Jennifer and their lovesick antics are woven through the middle section of the play as they sing and move with precision comic timing in clever slapstick set pieces.

My one observation, not criticism, is that first appearances were a very little bit shaky – perhaps a longer warm-up is required.  However this did not detract in any way from the evening. The songs are melodious and evocative.  The characters are beautifully portrayed. The play has a fabulous energy and there is just a tinge of sadness as the company greets the sunrise and the woodlanders head back to the forest to a world which will never be the same again.  A superb ***** production.

See it at Greenside@Nicholson Square from 8th to 12th August at 4.15pm.