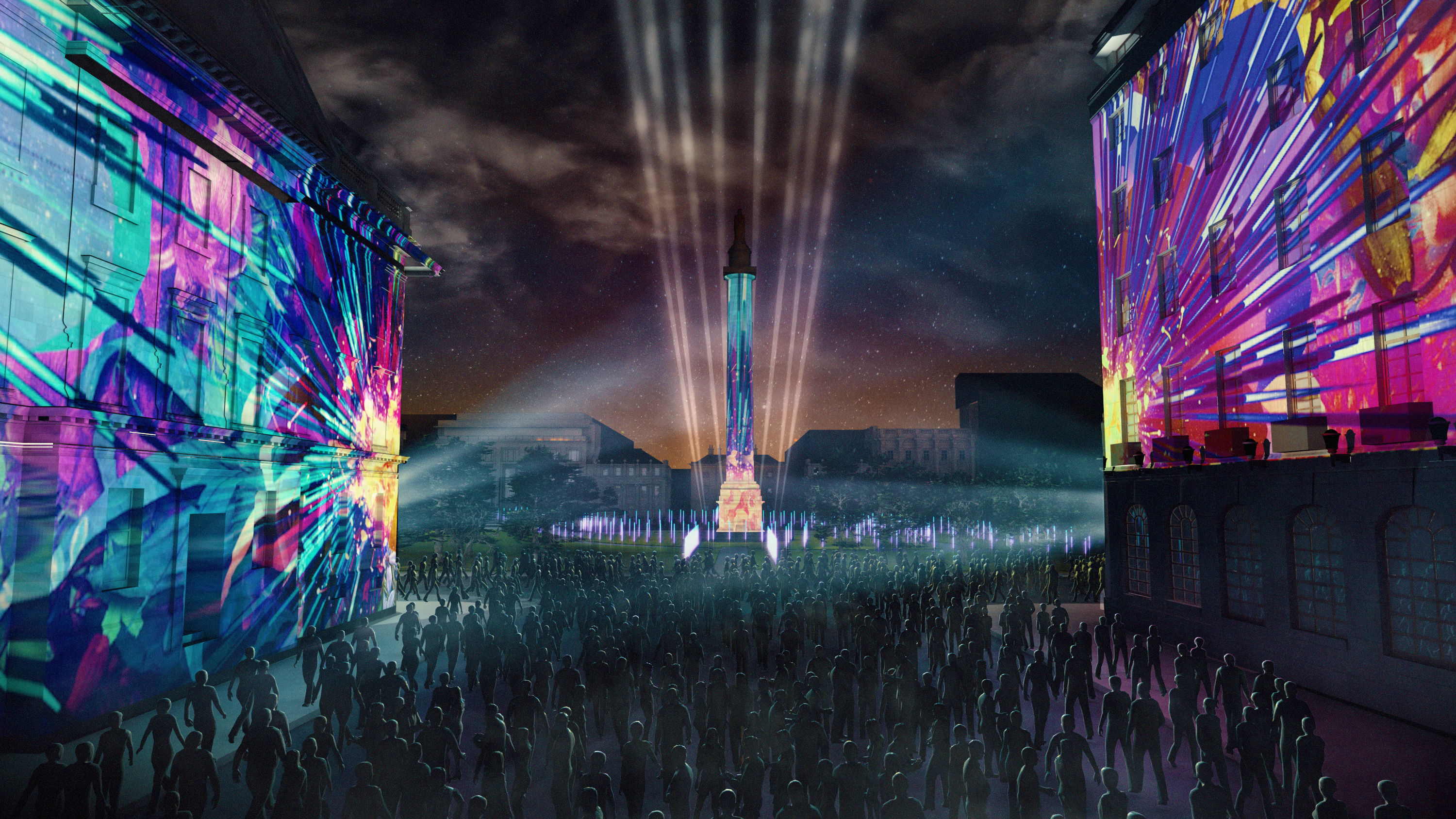 In a week’s time St Andrew Square will no doubt be closed off to traffic amid preparations for the evening ahead. Certainly preparations are already being made with scaffolding structures around the edges of the gardens.

And it looks as though we will once again be entertained to a spectacular sound and vision experience to start the Edinburgh International Festival.

Following upon Harmonium and Deep Time in the last two years 59 Productions under the direction of Leo Warner will stage another large-scale animated projection, this time in the New Town which is marking its 250th birthday. The display will draw upon the architecture of the city centre, Edinburgh’s rich cultural heritage and the technological innovation which the capital is known for.

In addition to the £300,000 already promised to the festivals in this important year, Cabinet Secretary for Culture, Tourism and External Affairs, Fiona Hyslop, confirmed the Scottish Government’s Edinburgh Festivals Expo Fund contributed £100,000 in support of Standard Life Opening Event: Bloom recognising its status as a key moment in the 70th Anniversary celebrations and noting its ambitious, inspiring and artistic visual representation of those 70 years to create a fitting tribute to Edinburgh’s legacy as the city that inspired cities around the world to celebrate cultures.

Ms Hyslop said: “I never tire of championing Scotland’s outlook as a welcoming and progressive nation and this is particularly demonstrated in the arts.

“In 1947, the Edinburgh International Festival boldly invited artists from across Europe to perform in the capital. 70 years on, we’re revered as a festival nation that welcomes performers and audiences from every corner of the globe.

“We boosted the Scottish Government’s EXPO Fund by a further £300,000 to mark Edinburgh’s 70th anniversary as a festival city. I am delighted that part of this will support the Standard Life Opening Event: Bloom, an ambitious, inspiring and artistic visual representation of those 70 years. It is a fitting tribute to Edinburgh’s legacy as the city that inspired cities around the world to celebrate the arts.”

Standard Life Opening Event : Bloom will use all the facades around the square and create a canvas for projection mapped animations.

“The Standard Life Opening Event: Bloom will look back and celebrate the creativity and achievements of this world-class Festival. Both Standard Life and the International Festival have a rich heritage that reflects our shared commitment to excellence and our forward-looking approach, often leading the way through collaboration and innovation. The Standard Life Opening Event: Bloom will bring many examples of this to life and will inspire others for the future too.’

Composer Nick Powell has written a new musical score which will accompany the visual spectacular.

In 1947 when the festival began the then Lord Provost said that the new festival should ‘provide a platform for the flowering of the human spirit’. To mark the blooming of Edinburgh as the Festival City there will be a display all around the square on a 20 minute loop that you will be able to walk through.

The Rt Hon Lord Provost of the City of Edinburgh, Frank Ross, said: ‘In 1947, my predecessor Lord Provost Falconer championed the inception of the International Festival. Today, I am as determined as ever to see the event bring people together from all over Scotland and the world. The Standard Life Opening Event: Bloomwill provide a beautiful and fitting celebration of our festivals and our city, and of course, the continued flowering of the human spirit. We are delighted to have supported our city’s festivals for 70 years.’

This visual feast is designed to  chart the transformation of post-war Edinburgh into the colourful festival city that it is today. From 10.30 till midnight we are promised a sound and light event described as a ‘visually stunning digital constellation’ and the spectators will be at the centre of it with time to explore it at their own pace.

Entry to the event is free. To guarantee access for the 10pm start, a limited number of tickets are available for both nights and will be released from 10am on Monday 3 July. Ticket holders can access the event arena from 9pm ahead of the event beginning at 10pm on both evenings. Non-ticket holders are also welcome to attend and will be admitted from 10.30pm on a first come basis. “That energy has transformed Edinburgh and sparked not only the development of the Festival City we know today, but the creation of countless other festivals around the world. We’ll experience that transformative power first-hand in Bloom, as 59 Productions create a digital constellation in the centre of our city that places our story and Edinburgh’s people at its heart. It takes a huge amount of collaborative work to mount an event like this, and it wouldn’t be possible without the support of our partners.

“I’d like to thank all of them – Standard Life, the Scottish Government, EventScotland, the University of Edinburgh, Blue-i Theatre Technology and Mclcreate – their support enables us to present this incredible celebration of our Festival City in its birthday year’.

Leo Warner, Founder of 59 Productions and Director of Standard Life Opening Event: Bloom said: ‘Following two wonderful years working with Fergus and his team at the International Festival to create increasingly ambitious and engaging opening events, we faced a challenge in conceiving a new piece befitting the significance of this anniversary year.

“We decided to place audiences inside the event, encompassing them within nearly half a linear kilometre of projection-mapped architecture and bespoke lighting fixtures, and use music, sound and light to tell a story celebrating the 70 year history of the International Festival and the associated Edinburgh festivals, and the immeasurable impact that it has had on the cultural world.’

Entry to the event is free. To guarantee access for the 10pm start there are a limited number of tickets for both nights available on 3 July at eif.co.uk/bloom.

Tickets are available at eif.co.uk/bloom.