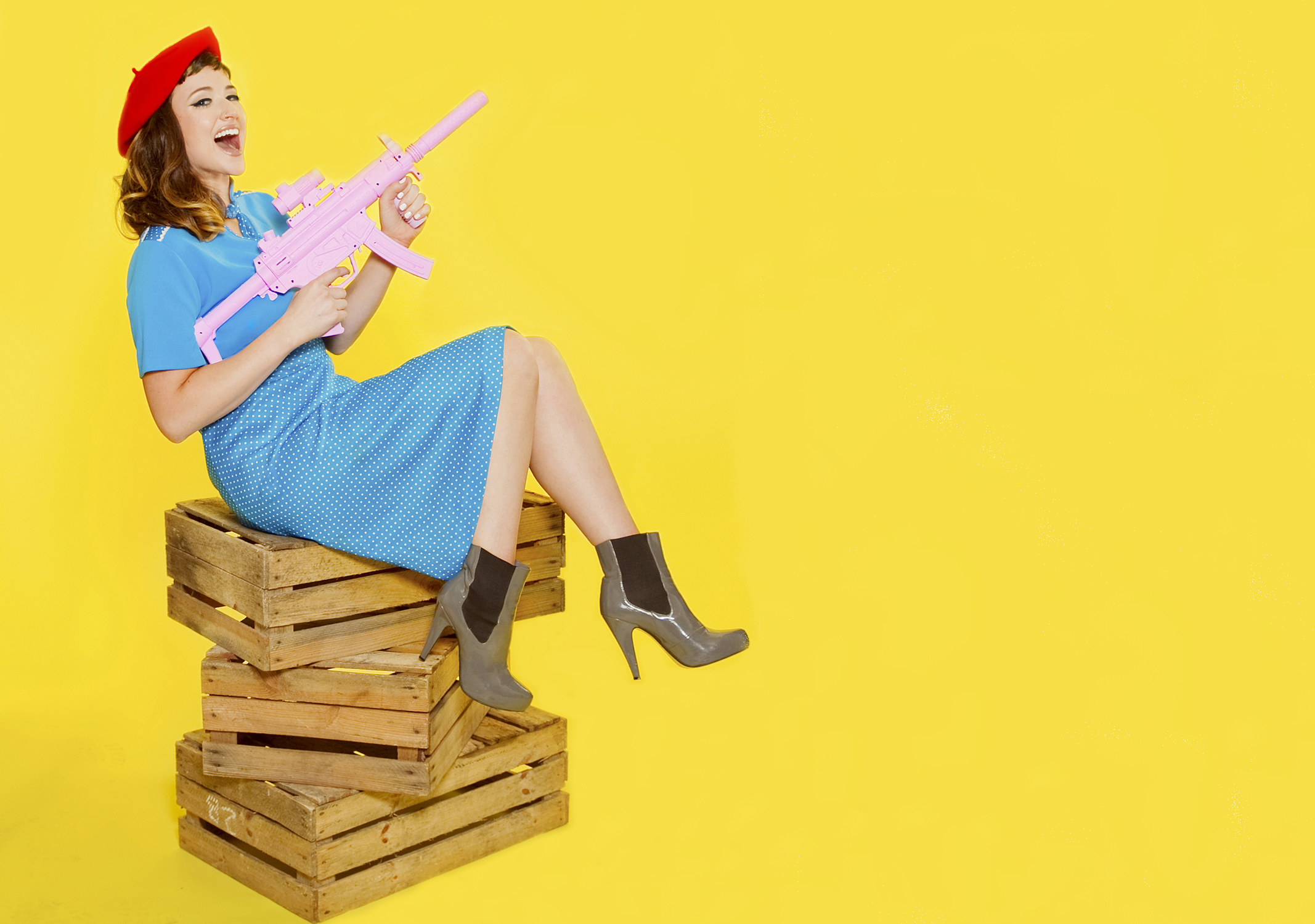 In the sixties French new wave filmmaker Jean Luc Godard famously claimed that all he needed to make a film was a girl and a gun.

Artist, theatre-maker, film buff and Godard-fan Louise  Orwin (Fringe first timer), began to wonder about this and question whether the media’s portrayal of women has moved on in the 50 odd years since he made his claim. She thought about this when watching Beyonce’s video for ‘Videophone’ featuring the singer and Lady GaGa dressed in their scanties bearing multi-coloured guns, and the Springbreakers (US film) scene where two teenage girls lie on a bed surrounded by guns, using them as suggestive props…

She began to wonder whether anything had moved on at all.

Louise started seeing girls and guns everywhere. She obsessed over them on YouTube, marvelled over them in music videos, felt a bit disgusted about them in video games, and tried not to see them in pornography.

She decided to make a show that would challenge those films that use girls and guns as easy plot devices, and the audiences that watch them – whilst also admitting her own confusion, as a woman, at being simultaneously repulsed and attracted to that imagery.

‘From a young age I’ve been particularly drawn to the image of the femme fatale’ said Louise, ‘but as my politics developed I began to question this. By making an unprepared stranger the star of the show every night, it is my hope that audiences will consider how they might feel if they, too, were put in this position’.

A Girl And A Gun brims with wit and fun, whilst being unflinchingly provocative and thought provoking. Its cuttingly sharp satirical script is playfully performed by Orwin alongside a different male guest performer at every show. Structured as a live filmmaking experiment the show asks what it means to be a hero, what it means to be a plot device, and what it means to watch. Expect gun twirlin’, play-actin’, Nancy Sinatra-dancin’. And me. And you.

The guest male performer will have never seen the script before so his reactions – and those of the audience – are genuinely spontaneous. He
will read his lines and stage directions live off an autocue, the audience seeing some of his lines and directions projected onto an onstage screen. As the performance progresses, He is directed to do increasingly violent things to Her, and He must decide what He will and won’t do.

Louise Orwin is a London based artist-researcher. Her work spans the live and the recorded with incarnations in performance, video and photography. She is preoccupied with liveness, awkwardness, femininity and masochism, but above all she likes to have fun.