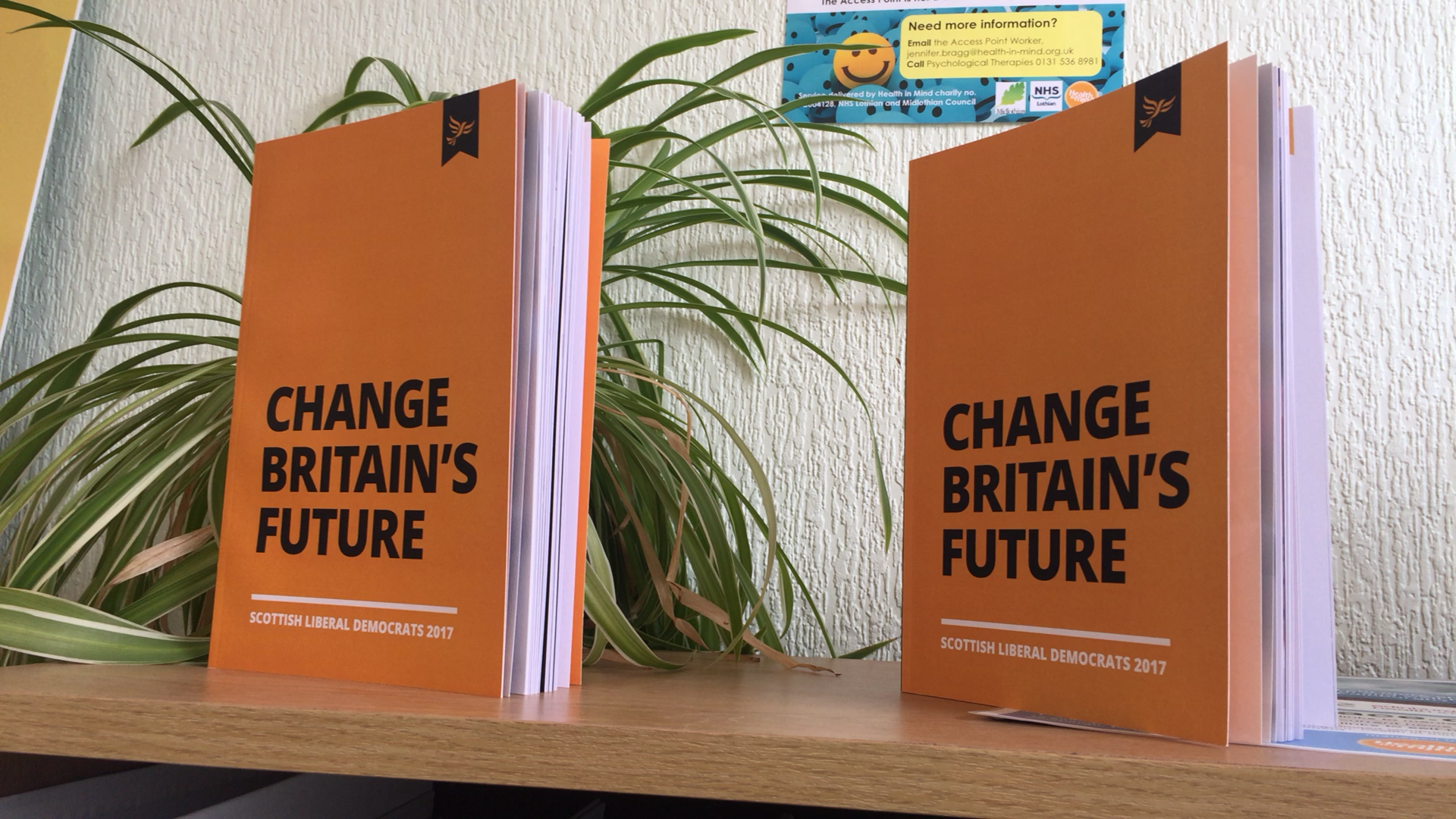 Proving that if you want something done you have to do it yourself, the leader of the Scottish Liberal Democrats, Willie Rennie, got hold of his paints yesterday and painted his own logo.

It was another innovative photo call by the Scottish Liberal Democrats, even though it was inside a rather stuffy room at the West End. The media were called to a low key launch of the party’s Scottish manifesto at the offices of mental health charity Health in Mind on Wednesday lunchtime.

The party leader talked about their plans and policies, but in particular mental health which they are championing, as you can see in our video report below.

What is different about this manifesto is that rather than setting out what the party would do in government, it sets out the way it would change the direction that Britain is taking on Brexit and on Scottish independence. Given the party’s stance against entering into a coalition with the Conservatives or the Labour party this is not a party which will govern, but they do still hope to make a big difference.

“But also to have a transformational effect in education, because Scottish education used to be the best in the world and now it’s just average.”

When we challenged him about the fact that education and health are both matters devolved to The Scottish Government, he was not swayed from the main message.

He replied : “The issues here are that the SNP are so distracted by independence that mental health and education are suffering as a result. They need to focus on the day job and that’s why we need to say no to a second divisive independence referendum. The SNP had their shot three years ago and we rejected that bad deal.

“Now we need to get on with sorting out mental health and education. But we also need to have the right for the British people to reject a bad deal on Brexit too. It’s such a monumental issue that the British people shouldn’t just rely on Nigel Farage’s bus with his slogans on the side of it. We should have the detail on the deal before we make the final decision as to whether it’s good or not.

“I know the Conservatives will just accept any deal because they have to deliver Brexit. That is their commitment, but with the Liberal Democrats if people want to reject a bad deal then they can vote for us.

“So no to independence full stop. Yes to mental health and education investment but also the right for the British people to reject a bad deal on Brexit. That’s what you get with the LibDems.”

Mr Rennie is also upbeat about the party’s chances of increasing their numbers from one during the last parliament to many more.

Edinburgh West is of course one of the seats where there is a battle between the SNP and Liberal Democrats. At the last election this seat was won by the SNP with a majority of 3,210 taking it away from the incumbent MP Liberal Democrat Mike Crockart.

Will it swing the other way now? The local MSP Alex Cole-Hamilton is sure that with this manifesto it will. We spoke to him yesterday too. He said : “As an MSP I have helped to shape part of the policy, but ultimately this is informed by our party’s conference.

“We actually have a very unique offer at this election. We are the only party on the Scottish political stage which is offering a bright future for Scotland at the heart of the United Kingdom and the UK at the heart of Europe.

“In this month’s council elections we were shown to be in contention in a whole raft of seats across Scotland including Edinburgh West.”

Cole-Hamilton is not only the manager of the Scottish General Election campaign but is the MSP for Edinburgh Western so he has a particular interest in getting Christine Jardine elected there.

He explained : “At this election we are building on the record of service that I have established over the last year but that in itself is built on a legacy of trust in community service that Donald Gorrie, Margaret Smith and John Barrett established in three decades. Christine Jardine our candidate is a strong advocate for community issues and will work side by side with me on the whole range of issues affecting West Edinburgh.

“Our message is resonating with voters on the doorsteps.” Edinburgh West candidate Christine Jardine believes her campaign is going really well, and that the SNP’s pursuit of independence is not helping their drive for the seat. She said : “We want to talk about community issues and things that people in Edinburgh West are concerned about.

“I came to live in Edinburgh this time over a year ago. My career has taken me all over Scotland. I worked in Edinburgh with the BBC and at the Scotland Office when I was Scotland Media Adviser. I worked for a PR company in Leith but I Have moved about with my career.

“But I decided to come back to Edinburgh to be close to my daughter, and to work because I am self-employed. I did not know that Theresa May was going to call a General Election. She is not a close personal friend, she doesn’t confide in me and I am not psychic!

“Its important to me that Edinburgh West has the best possible representation with someone who will listen to them.”

One of the areas which really interests Christine Jardine is mental health. ” I think the Liberal Democrats have the best set of policies for trying to get some action and some attention for what is a massive issue for so many people in this country.

“The statistics claim that one in four of us at some point in our lives will suffer from a mental health issue, but if we drill down into that statistic that actually means each one of those one in four has a family, they have friends, they have a job.

“We need to invest in mental health care – which is what we want to do. We want mental health professionals more available in GPs’ surgeries and in schools.

“At the moment children in Scotland are having to wait two years in some places. That is simply not good enough.”