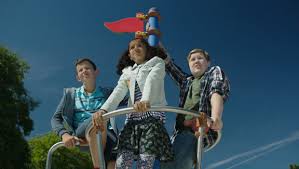 Directed by Claire Downes and co-written by Claire Downes, Ian Jarvis and Stuart Lane from Catherine Bruton’s novel, this is a stunning, poignant mix of comedy, tragedy, love and drama.  In a film full of racial and social stereotypes we find some who are capable of surprising insight, tolerance and compassion too.

Ben (Toby Haste) was a baby when his father was killed in one of the 9/11 Towers. His mother struggles to cope and sends him to stay in a small, suburban Birmingham cul-de-sac with his paternal grandmother (Alison Steadman) and grandfather (Phil Davis).  He is soon welcomed by one of the neighbours, the utterly irrepressible Priti (Marissa Patel), and they form a sleuthing threesome when cousin Jed (Sam Cox), who is also left with his grandparents for the summer, meets Priti’s very diverse Muslim family.  The trio become convinced that big brother Shakeel (Richard Samitro) has been radicalised and is going to become a suicide bomber. Meanwhile big sister Zara (Rukku Nahar) is having a relationship with one of the local neds: as Priti says, “Stupid girls like Zara always go for bad boys.”  Things begin to come to a head when Shakeel has his wedding party in the street and a few members of the local gang try to spoil it, forcing everyone present to decide the differences between right and wrong.

This superb cast carries off every scene with aplomb and panache.  In particular, the three youngsters are heart-stoppingly convincing: Toby Haste, gauche, appealing, believable; Sam Cox, a Corden in the making; and Marissa Patel, who simply steals the show.

This is an important film for the UK in 2017.  It is a thought-provoking essay on what is happening in our country, on rights, responsibilities and prejudices.  The film made this reviewer laugh aloud and cy, sometimes simultaneously.  If you see only one movie this festival, this year even, see We Can Be Heroes.