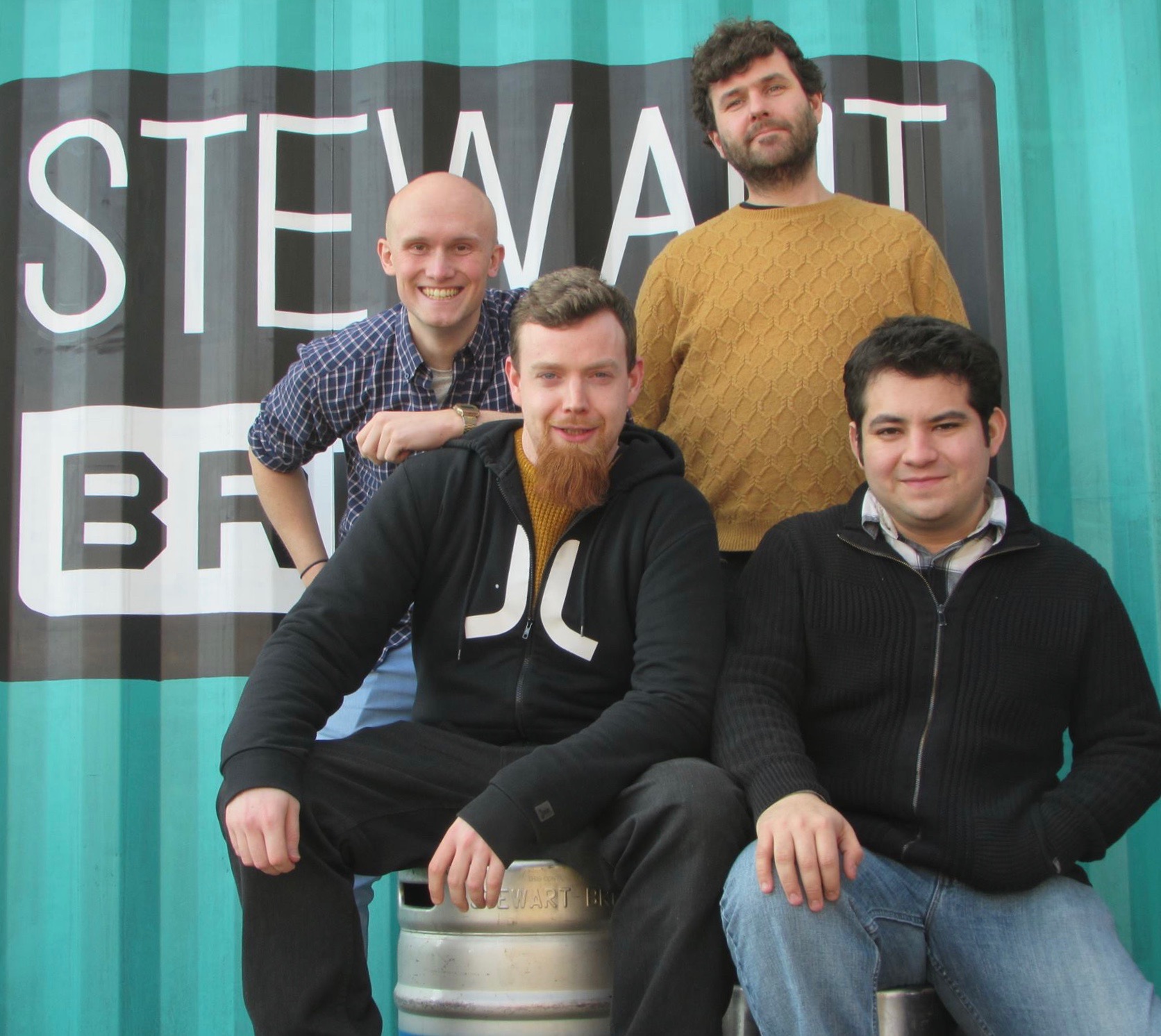 Four students on the Brewing and Distilling MSc course at Heriot-Watt University have won the support of Stewart Brewing in producing some of their own brand beer.

Patrick, Phil, Louis and Mark have now made a beer called Common Ancestor. Patrick Smith is in charge of marketing and he spoke to us at Stewart Brewing where the beer has been designed and made. He said : “I’ve been studying for a Masters in Brewing and Distilling at Heriot-Watt.

“Steve is a graduate from the course way back, and when he came back to Edinburgh to start his own brewery he wanted to give something back to the university. He started up this project called Natural Selection Brewing. Each year four students get the opportunity to brew, brand, design, sell and market a brand new beer.”

Tonight at an event at OX184 on Cowgate their new beer, developed and bottled with support from the Loanhead based beer  producers will be officially launched.

Camera legend Roger Protz will be giving a talk at the start and you can still get tickets on the Stewart Brewing Facebook page.

The students have risen to the challenge of producing 5000 litres of their own brew and will now be responsible for selling it across the UK.

The beer is called Common Ancestor, a 5.2% ABV California Common which is made according to a style which began in the US in the 1800s when lager yeasts were fermented at the higher ale yeast temperature due to lack of refrigeration.

Patrick Smith, Project Marketer, describes the beer as “an effervescent ale/lager hybrid, with caramel, citrus and pine notes, thanks to a liberal dosing of Dr. Rudi and Chinook hops. A slight hint of juniper complements this nicely. Our beer has evolved from the traditional California Common style to be fit for modern day consumption.”

You can still get tickets to go and taste the newest beer from @StewartBrewing on Thursday night @OX184 Here is the story behind it pic.twitter.com/MEFeDCLFOo

Mark Ritchie, Head Brewer for the project, said :  “A California Common, being relatively unexplored by the craft beer scene, gave us a lot of scope to play around with and add our own twists. It’s a slightly unusual, but still very drinkable style.”

The beer’s launch night at Cowgate’s OX184 is open to the public to allow you the very first taste of Natural Selection Brewing’s newest creation, Common Ancestor.

There are two types of ticket.

A £12.50 ticket includes a talk with guest speaker and beer journalist, Roger Protz, as well as an intimate evolution tasting of how this year’s beer has developed (doors 6.00pm for 6.30pm talk).

Both tickets include one pint of Common Ancestor, a commemorative glass and bar snacks.

There will be a raffle in aid of Marie Curie with various beer-related prizes, including an evolution gift box of each of this year’s trial brews.