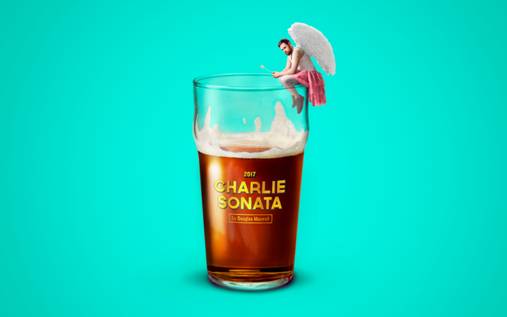 Charlie aka ‘Chick’ (Sandy Grierson) is a  dive-bar wreck reject from London sloshed back upon the shores of his native Scotland.

Time has changed all.

He and his two old Uni pals are now in their forties. They both have jobs, real jobs. Chick has a real job too – getting out of  bed before midday – if he has one.

Jackson (Robert Jack) argues that time-travel is non negotiable and flings them back to early 90s Stirling Uni where he expounds the essential tenets of Britpop. ‘The teenagers today don’t know they are born.’ Time warps indeed.

Time has yet to truly warp Gary’s (Kevin Lennon) future as the play opens with his teenage daughter, Audrey, hospitalised in a post-accident deep coma. Her hair tresses splayed across her bed pillow like a drowned Ophelia. Is her plight a catalyst for Chick to do something right for once? Atonement for his wastrel ways? Might he just need a pint to think it over first?

The enigmatic, tragic motor-mouth Meredith (Meg Fraser) can help him there. Part contemporary parable, part inner-ring-road trip Pilgrim’s Progress within the corrupted bowels of naked cities where the streets have no shame, maybe Chick is biting off more than he can spew? Nothing may become of his life like the leaving of it.

Fractured narrative constructs, surrealistic episodic delirium tremens manifest Chick’s  past and present demons. We can sympathise, at a distance, with his clownish dilemma, empathy is a much bigger ask.

As close to a elegiac modern Greek tragedy as a drunken Saturday night kebab dropped in the bus shelter its resonance and poetic grit remain ferally enchanting. It is just what The Lyceum just does and does well these days or be damned for it – whatever.