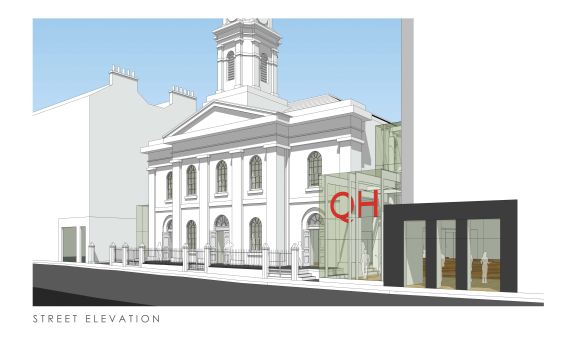 At The Queen’s Hall on Nicolson Street last week a fundraising campaign called  “Music To Your Ears” was launched ahead of a sparkling concert by Nicola Benedetti MBE. The funds raised will be used to refurbish the hall ahead of its 40th and 200th anniversaries.

The hall will have been used as one of the capital’s best-loved music venues for 40 years in 2019 and the building will be 200 years old in 2023. For that reason alone, some renovation is required to ensure the building’s future. Earlier this year The Scottish Government made £650,000 available  in a grant for external works, but now the board is embarking on an ambitious programme to introduce a more sophisticated feel to the venue.

The hall is popular with a wide range of musicians from all genres, evidenced by the programme for this month alone which includes Nicola Benedetti, KT Tunstall, Got Soul Choir and The Fureys. Now the surroundings and facilities need improvement to ensure they keep coming back, and to redress some neglect over the last couple of decades.

Along with a café, the Box Office and other public areas will be brought closer to the action, mainly due to the removal of an electricity sub-station which is inside the building and which Scottish Power are now going to move. This alone will open up more space and light, but coupled with major improvements to sound and lighting systems, the hall will become much more modern and attractive.

Chair of The Queen’s Hall Board, Nigel Griffiths, addressed an assembled group of patrons, trustees and supporters before Tuesday night’s concert and showed off the proposed designs. He said  : “Since its foundation in 1979 as the home of the Scottish Chamber Orchestra, we have hosted over 8,000 concerts and become Scotland’s favourite venue for all round music.

“We owe a great debt to our supporters which means we continue to attract international talent. We are delighted to have received a real vote of confidence from The Scottish Government in making funds available to upgrade and refurbish the exterior of the hall under the supervision of Historic Environment Scotland.

“Now we have appointed architects Mill Design to produce plans for the inside of the building with better facilities, a better cafe and a larger bar area along with a more comfortable experience in the auditorium itself.

“We need funds to the tune of £3million to enable us to embark on our plans, and that fundraising campaign is now formally launched.”

Karen Wood the Interim Chief Executive at The Hall said : “The Queen’s Hall is poised to enter an extremely exciting phase, the vision is inspired and we are about to see the past meet the future and music continue to come to life!”

Ms Benedetti was accompanied by Alexei Grynyuk on piano. She explained that the content of the concert was all Brahms, whom she loves deeply and began playing as a teenager. She also told the story of the relationship of Brahms and the Schumanns, and filled in the backdrop to the Sonatas which she then performed to a rapt audience.

Just yesterday Ms Benedetti became the youngest ever recipient of the Queen’s Medal for Music, another great honour in her already distinguished career.

I am humbled & grateful for this honour, & will continue to fight for people’s access to the arts. The soul of this country needs nurturing pic.twitter.com/RNtKLqffmW