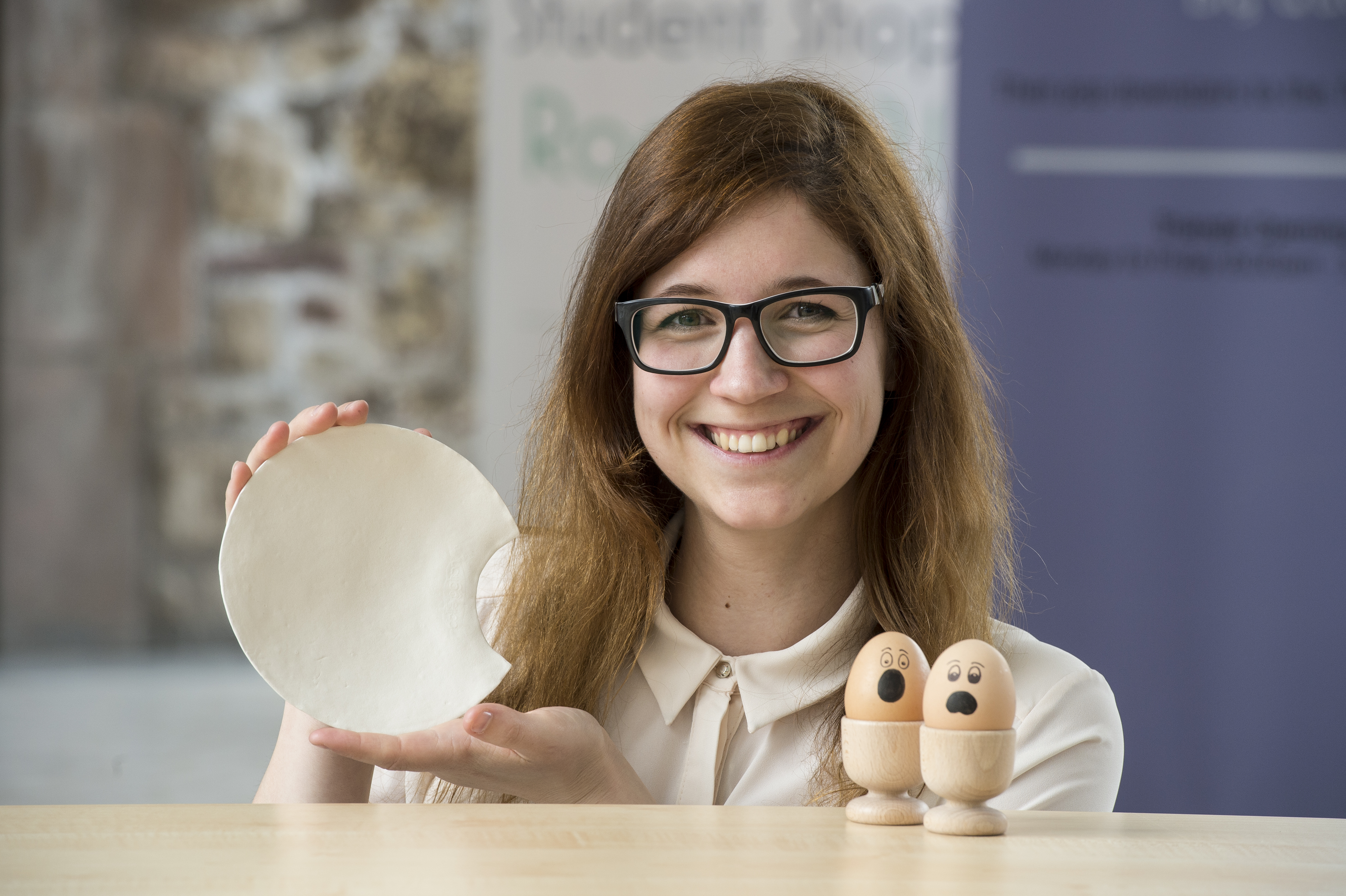 It’s the food stuff that is traditionally enjoyed scrambled, poached, boiled or fried.

But eggs could soon be appearing on tables in a way never seen before thanks to the work of one Edinburgh Napier student. Martina Zupan, a fourth year product design student at the University, has struck upon the cracking idea of using eggshells to make a range of disposable tableware.

The 26 year-old has designed and produced a product called ‘Colleggtion’ – a disposable circular plate with tearaway cutlery that is made from waste eggshells.

One of hundreds of exhibits at Edinburgh Napier’s More Than A Degree Show, the designer has developed a process that allows for waste eggshells to be formed into products.

This process is currently patent pending, but Martina believes her tableware could help highlight the opportunities that upcycling waste eggshells can bring.

She said: “The idea literally came to me one day as I was making scrambled eggs in the house and after some extensive research I found that despite eggshells carrying a range of beneficial components, very little was actually being done to upcycle waste product.

“I tested eggshell powder in a range of formats – including adding it to muffins, into plaster for egg cups and even cement and other resins but it was the tableware idea that really caught my imagination.

“I worked closely with research teams at Edinburgh Napier who had some leftover raw materials from various experiments that they were happy for me to use. I started testing it with the eggshells and things fell into place from there.

“I think I’ve managed to produce a sophisticated product that has the potential to highlight a new method of producing sustainable tableware and cutlery – it’s been really exciting to work on.”

Martina’s idea was sparked by becoming dismayed at the lack of recycling options for by-products within the food industry, meaning that potentially beneficial components such as calcium carbonate were simply being lost in landfill.

According to egginfo.co.uk, the UK consumes more than 12.5 billion eggs each year, which equates to more than 75,000 tonnes of eggshell waste. As a result of current laws and regulations, egg processors are obliged to send their eggshell waste to landfill, with more than 17,000 tonnes being disposed of in this way last year.

Despite some eggshell waste being used domestically, in restaurants and recycled generically though food bins, Martina still believes there is room for improvement when it comes to finding an alternative use for leftover waste.

“Very few know of the benefits that eggshells can bring to the environment. With this project, eggshell waste could not only be prevented and reduced, but eggshells would be recycled into a valuable product. Being fully compostable means the tableware can be disposed of together with food waste, which will then be, with the help of anaerobic digestion, turned into biogases which act as a source of green energy as well as nutrient-rich bio-fertiliser. It has massive potential.

“I’d love to continue the development of the tableware after my time at University comes to an end. Ideally I’d like to work with like-minded investors who could help commercialise the patent pending process further – it would be great to get some help and support to fully get the product up and running and onto kitchen tables.”

Richard Firth, Programme Leader, BDes (Hons) Product Design, said: “One of the many achievements that singles out Martina’s project is the incredible amount and range of her research and ideation process. Martina’s commitment, determination and drive to ‘try and try again has been rewarded in a design project that is truly unique with the potential to achieve real change with regard to how we think about materials, design our products and how we engage with  producing our products within the 21st century.”

Edinburgh Napier’s More Than A Degree Show is an annual showcase of the creative talent of new and emerging designers, photographers, film makers, journalists, creative writers and actors from its School of Arts and Creative Industries and School of Computing.

The exhibition runs within Merchiston campus and is open to the public from 19-28 May.