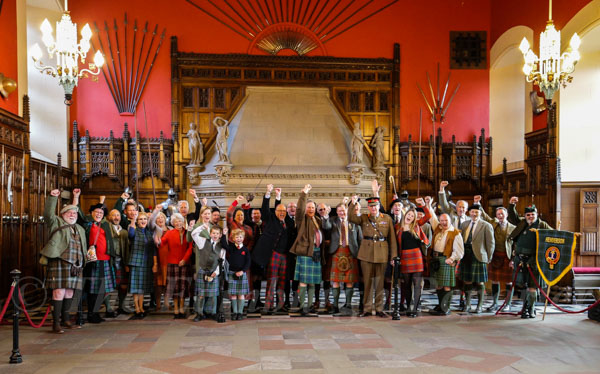 More than 30 clansmen and clanswomen marched to the Great Hall at Edinburgh Castle today (Monday, 8 May) to mark a hugely momentous occasion in Scotland’s history books. This is the first time that Scotland’s clans have been welcomed into the Castle since the Highland Clans marched to the City of Edinburgh to lay siege to the Castle during the Jacobite uprisings in 1745. The gathering was organised by The Royal Edinburgh Military Tattoo which is celebrating its own ties with the Scottish Diaspora this year.

The gathering of Scotland’s diaspora community is believed to be the only time that clans have been openly welcomed to one of Scotland’s oldest fortresses. Clan members were treated to a guided tour of the medieval surroundings of the Great Hall where their ancestors once attempted to gain entry to, courtesy of Edinburgh Castle’s Governor, Major General Mike Riddell-Webster, and hosted by The Royal Edinburgh Military Tattoo. The event is being heralded by historians as the latest iconic tale from the colourful history of Scotland’s clans folk. Today’s gathering was an indication of the strength of the clan involvement which still survives in Scotland, with more than 350 clans in existence.

In September 1745 more than 900 of the Highland clansmen marched to the City of Edinburgh to lay siege to the Castle. Although they managed to capture Edinburgh and Holyrood, in a hugely symbolic move, they were never successful in capturing the Castle as General Guest, Governor at the time, would not surrender the Castle to Bonnie Prince Charlie and his men.

During the Tattoo’s August extravaganza, the military showcase will champion the theme Splash of Tartan, a series of events that will encourage people living in Scotland and those with a link to Scotland to explore their ancestral connections with the country. In the opening ceremony of each evening, Clan Chiefs will lead their clan folk on to the Esplanade to the awaiting Tattoo crowd. Everyone across the city is being encouraged to dress up in finest tartan accoutrements.

The timely link up between the Tattoo and Scottish Diaspora, which falls during VisitScotland’s Year of History, Heritage and Archaeology, will be reinforced through a range of separate partnerships and initiatives, including a tie up with The National Museum of Scotland, The National Trust of Scotland and Historic Environment Scotland who have collaborated to create a new trail of 25 properties and attractions throughout the country whose history is intertwined with Bonnie Prince Charlie and the Jacobites.

Sir Malcolm MacGregor, convener of the Standing Council of Scottish Chiefs, said: “It is a great honour for 57 clans and chiefs to be taking part in such a prestigious event as The Royal Edinburgh Military Tattoo this year. There will be clan representatives from around the world, in keeping with the high international profile of the Tattoo, and the global nature of today’s clan network. For the participating clans, it will be a dream come true to march onto the Esplanade of Edinburgh Castle, a location that has, over the centuries, been central to the clan story. Tartan will be to the fore with the clans kitted out in the ‘Garb of Old Gaul’. The great cloth, that has been worn by the Clans and Scottish Regiments since the Jacobite period of the 1700s, will be on full display and worn with great pride.” Fiona Hyslop, Minister for Culture and External Affairs, said: “Scotland’s history and heritage is a key draw for visitors to Scotland, no more so than in 2017, the Year of History, Heritage and Archaeology. The clans are an integral part of our rich heritage, their histories shaping Scotland. The clans generate significant interest from the international diaspora and I welcome their involvement in this year’s Tattoo.”

Brigadier David Allfrey, Chief Executive and Producer of The Royal Edinburgh Military Tattoo, said: “I am delighted that we will be hosting the Clan Chiefs and their clans folk in the Great Hall this August – 57 clans will be represented in all! I am so grateful for the encouragement of the Governor of Edinburgh Castle, Scottish Ministers, Historic Environment Scotland and the Standing Council of Scottish Chiefs. Everyone has been hugely supportive of this initiative which, I believe, offers a wonderful opportunity to reinforce the connections between the great Scottish families and their kith and kin around the world.”

“Edinburgh Castle has been at the centre of so many extraordinary events over the years and it is tremendous that we will see another story playing out this summer. I wonder what the forebears of the Clan Chiefs and the leaders of the Families would be thinking if they could witness so many of their descendants being entertained in the Great Hall?” “As well as looking to our history and heritage, I hope the Tattoo’s ‘Splash of Tartan’ will serve to stimulate anyone with a little Scottish blood in their veins to visit and enjoy our hospitality and everything that is remarkable about modern Scotland. We are looking forward very much to playing our part. Let us all splash the tartan this August!”

Major General Mike Riddell-Webster, Governor of Edinburgh Castle, added: “History relates that a Royal Castle has stood on the Castle Rock since the 12th Century with a Captain or a Governor in place since Bartolf in the late 11th Century. I am hugely honoured to be Her Majesty’s appointed guardian of this ancient fortress and am delighted to have the opportunity to host the clans in the Great Hall. Each evening during the Tattoo we will welcome nearly 200 clansmen and women into the Castle. I believe the Castle has been besieged 23 times in its long history and claims to be ‘the most besieged place in Great Britain and one of the most attacked in the world’. This time though I hope everything will be peaceful.”

Nick Finnigan, Executive Manager of Edinburgh Castle, said: “I’m very pleased to welcome Scotland’s diaspora community to Edinburgh Castle for this special event. After a record breaking year which saw 1.8 million visitors from all over the world flock to this iconic site to explore its unique place in Scotland’s history, Edinburgh Castle is a fitting venue to host clansmen and clanswomen from Scotland and beyond. I hope that this event will inspire people to come and discover Scotland’s historic environment for themselves.” The Royal Edinburgh Military Tattoo returns to the Esplanade of Edinburgh Castle between 4-26 August, offering a thrilling mix of entertainment and pageantry from cultures around the world to an audience of 8,800 each evening, and a further 1 million through televised broadcasts globally.