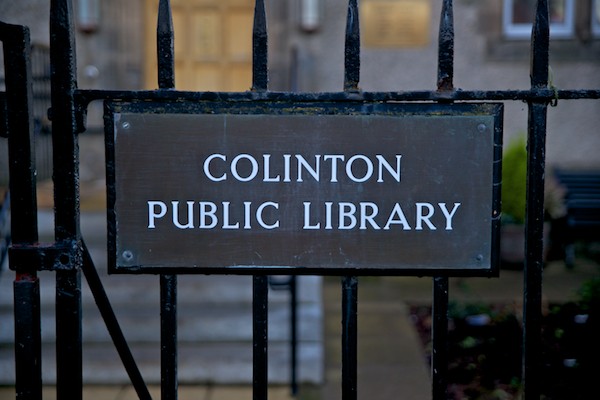 This ward probably has the cutest library in the city…

The current councillors for the ward are :

Richard Lewis has been Culture Convener during the last administration. He is both a musician and conductor so is well equipped for the job.

Jason Rust is a solicitor. Elaine Aitken has been a Bailie and is resigning at this election. The ward is a three member ward and the 2017 candidates are :

The Edinburgh Labour candidate is Dr Scott Arthur who lives in Buckstone. This is what he had to say on launching his campaign.

The Edinburgh Reporter spoke to Dr Arthur near Hillend which is one of the boundaries of the ward where he is standing. He explained the reasons for wanting to be elected: “My name is Dr Scott Arthur and I am standing for election to the council for the Colinton/Fairmilehead Ward. The reason I am standing here is because I live in this ward. I’ve lived here since 2000, and I want it to be a better place to live and bring up a family.

“What I aim to do is just basically listen to people and represent them more. I think just now we’ve got three councillors only one of whom is part of the administration. If elected I would hopefully be part of the administration and actually speak out for people. There are big things happening in this ward. There are developments in Winton in the green belt, and also a proposal to demolish Comiston Farmhouse, the redevelopment of the barracks in Colinton. I think it is really important that people have a strong voice who is speaking up for them on the council to make sure their views are heard on these key issues.

“I’m a civil engineer and an academic. I run one of the UK’s most successful engineering programmes. It runs across three countries, two of them outside of the UK. That involves managing quite a lot of staff and quite a lot of students, lots of problem-solving, lots of listening to people, lots of helping them. And that is what I want to bring to this job. I am not standing for election to necessarily sit on council committees, it is about helping people who live in this ward and making sure they get a better deal from the council.

“We have been running the campaign since January and it is quite refreshing speaking to people. They are not speaking about Brexit, they’re not speaking about Scottish Independence. What they’re talking about are things like street lighting, potholes, the state of our pavements, bin collections, the day to day things that really matter. If I am elected that’s the kind of things I want to spend time working on. I want to make this a better place to live and bring up a family as well as the bigger issues.

“Essentially this ward extends from the Braid Hill in the east to the other side of Colinton in the west. I live in Buckstone, and I have lived there since 2000. My kids went to Buckstone Primary School and then on to Boroughmuir High School. I am familiar with the ward and I cycle its length every day on the way to work. I know it relatively well.

“One of the things that I have been thinking about is that if I am elected as a councillor  is what we can do to get people to use public transport more, use active transport more, so walking and cycling. I want that to be much more about carrot than stick. What can we do to encourage people to use the bus more if they are travelling to town. I have a car but I very seldom use it to travel around, particularly into town because I find it quite slow and quite frustrating.

“I find using the bus much more flexible. So what I am quite keen to do is to think about how we can encourage people to use other modes of transport. I have been looking at the feasibility of say, when people pay their council tax they get some sort of token or whatever that enables them to use the bus free once per month or a few times a year, just to break them out of the habit of using their car all the time.

“There are areas which are very affluent, probably some of the most affluent areas in Scotland some of them and there are also areas with quite high levels of deprivation. So in a lot of ways it reflects the build up of Scotland in general, with quite significant problems to do with inequality.

“Those problems to do with inequality are why I joined the Labour Party back in 2014, and also to a certain extent it’s also why I’m standing as a candidate. I want to try and make sure that when we pay extra council tax over the next few years that our ward gets their fair share of that money, and that the money is invested to tackle some of these problems.”

Phil has lived in Edinburgh for 27 years, working as an actuary for several financial services companies. He lives in the south of the city with his wife and two daughters.

Phil said: “Elaine Aitken has served the area with distinction and I hope to have the opportunity to similarly represent the residents of Fairmilehead. I look forward to meeting the residents over the next few months to understand their concerns for the area and their hopes for the city.”

“As the city remains an attractive place to live, there will be more demand for housing and the extra infrastructure that requires. As the city, and Midlothian, grows, more traffic will access the roads around Fairmilehead, especially at peak times.”

“It is essential that local residents can safely access the main roads for their own commutes; local businesses and facilities must remain accessible and pupils and parents must be able to safely get to school. Over the next few months I want to understand how best the Council ensures residents live around safe roads in Fairmilehead.” Richard Lewis has been the administration’s Culture Convener and Festivals Champion. He was the obvious choice as he is a musician and conductor.

With a B.A. (Hons) in Music he has worked as a freelance musician and conductor in Austria, Hungary, Australia, Denmark, Belgium and Ireland, has been an SNP member for 18 years, joining soon after finishing university and has represented Colinton/Fairmilehead since 2012.

He is possibly the only councillor we have ever interviewed on the Festival Wheel in Princes Street Gardens, and probably one we have interviewed more than others. Born in Scotland, Sara Marsden lived in places throughout the UK and in Europe, before returning to Edinburgh in 2010, where she has been active in local community groups since then. Her career spans a range of work environments including as an (HSE) occupational health and safety inspector and as a national trade union officer supporting workers and their safety representatives as well as lobbying Ministers.

Sara now focuses on public health policy issues and has a particular interest in social determinants and in health inequalities. This, along with academic study and research, gives her the skills a councillor needs to effectively make a case on behalf of others.

Jason Rust is a lawyer in the city and combines that work with his role as a part-time Legal Adviser to Scottish Land & Estates.