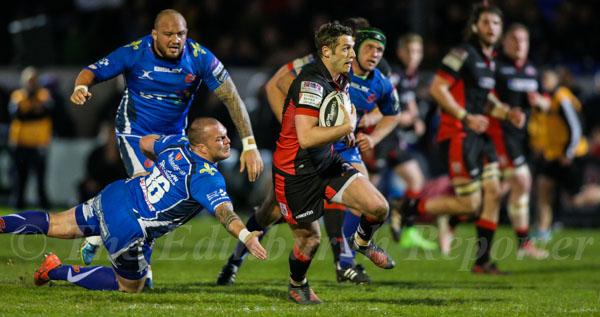 Edinburgh leave it late for the win Edinburgh indeed left it late to secure their first win in 10 matches with an 83rd minute try to snatch the points at Myreside on Friday night from, what had been up until late on, a – relatively – superior Dragons side.

In a largely forgettable match, Edinburgh fairly dominated the opening exchanges taking an early lead with an eighth minute, Jason Tovey penalty for 3-0, but after the first 15 minutes or so, the match degenerated into a mistake ridden encounter, with neither side covering themselves with much in the way of glory.

Glory did, briefly, shine on the visitors, however, as a well worked side-to-side move saw Dragons’ wing, Pat Howard, who ghosted through a gap down the left to score the first try, which was then converted by their 10, Angus O’Brien.

With a couple of minutes to go I the half, O’Brien was able to stretch the Dragons’ lead to 10-3 with a penalty from just inside Edinburgh’s half for 10-3.

The second half continued where the first had left off, with both sides making slight advantages, but failing to capitalise through a variety of errors, until, in a repeat move of their first try, the Dragons put full back, Carl Meyer, down the touch line for a try. O’Brien converted again and the score was 17-3 for the visitors.

Then, with 64 minutes on the clock, Edinburgh scored their first try….. Only, they hadn’t. Despite sub, Blair Kinghorn crossing the line, a TMO consultation lead to Allan Dell being yellow carded for an illegal clear-out at a ruck.

With just over 10 minutes to go, and the home fans seemingly resigned to another defeat, O’Brien hammered home a potential nail by scoring a 70th minute penalty for 20-3.

With the odd fan leaving the ground, anticipating another failed attempt at a win, the Edinburgh side must have decided that they had built up enough of a false sense of security for the visitors and, so, turned up the wick. And what a wick it turned out to be.

A prolonged assault on the Dragons’ line lead to Tovey offloading the Kinghorn who reached over the line out of a last-ditch tackle for a – successful – try, converted by Tovey for 20-10. The former Dragons stand-off, then proceeded to take his former side apart with a series of penetrating runs which, eventually, bore fruit with another defence-splitting pass to put Damien Hoyland through for their second try with less than two minutes on the clock. Tovey then converted for 20-17.

Edinburgh were now playing with their tails up and as the clock ticked over in to extra time, they were in the Dragons’ faces again. A string of penalties were quickly taken and the final move saw captain, Grant Gilchrist reached out from a pile of bodies to touch the line with the ball. The TMO suggested that he had a look, but all was good and, with another Tovey conversion, Edinburgh had taken the match at 24-20 in the 83rd minute for their first win in any competition since the end of January.