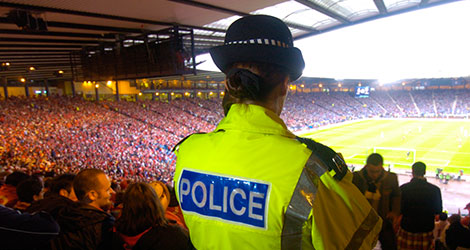 Greater Glasgow’s police chief is urging supporters to “focus on the football” ahead of this weekend’s Scottish Cup Semi-Final fixture between Hibernian and Aberdeen.

A number of roadworks are in place that may affect those travelling to Hampden and police are advising supporters to plan travel ahead.

Traffic management plans are in place and officers will carry out specific operations to ensure the safety of those attending the matches.

Chief Supt Brian McInulty said, “Once again, Glasgow hosts a fantastic weekend of football which is sure to be exciting. As is normal, we have a robust policing plan in place for these fixtures with public safety being firmly at the heart of it.

“You may see additional officers in Glasgow and around the stadium who will assist those supporters attending at the stadium. Although the majority of supporters attending these matches are well-behaved and enjoy the game, there is often a minority who are intent on drinking too much alcohol and engage in criminal behaviour such as vandalism, disorder or offensive behaviour.

“There are still a number of road works in place on the M8 and M74 which may impact on those travelling to the stadium. Plan your outing in advance, know your travel plans, drink responsibly and be aware of any restrictions on what you can bring into the stadium such as pyrotechnic devices.

“Let’s keep the semi-finals focused on the football so that supporters can enjoy a safe match.”

Officers will be working with a range of partners including the clubs and British Transport Police.

Chief Inspector Stuart Wilson from British Transport Police, said, “This weekend’s matches are an important fixture for both teams and we are looking forward to welcoming fans as they make their way to Hampden. Preparations for this have been in place for many weeks and alongside Police Scotland we will have a highly visible policing presence in order to deter crime and antisocial behaviour.

“We want fans to enjoy themselves and will be working hard ensure everyone has a safe and enjoyable journey. Officers from BTP will be at stations throughout Glasgow as well as joining fans on-trains as they make their way to the game. Passengers are the eyes and ears of the network and I’d encourage anyone who does have any concerns while travelling on the railway to report them to us by simply texting 61016.”

Please comply with all safety and security arrangements relating to Hampden Stadium as it is an offence to: