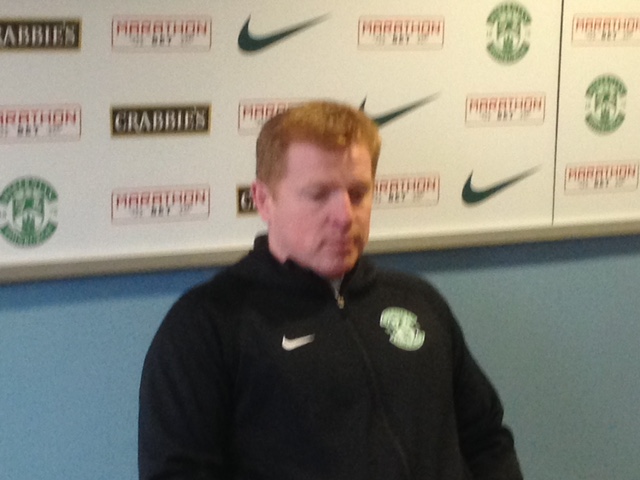 Hibs’ Head Coach Neil Lennon says he is ‘proud’ of his players after the team finally clinched automatic promotion from the Championship with a comprehensive 3-0 home victory over Queen of the South yesterday.

Over 17,000 fans turned out to see Hibs secure the title with goals coming from lifelong fan Darren McGregor (2) and club captain David Gray.

The players celebrated on the pitch after the final whistle and Lennon was carried on their shoulders.

An emotional rendition of club anthem ‘Sunshine on Leith’ rounded off a perfect day for the club and Lennon has asked that the supporters continue to back the team in the top flight.

Hibs return to Hampden Park for the ninth time in the last five years next Saturday to face high flying Aberdeen in the semi-final of the Scottish Cup as they bid to defend the trophy.

Speaking after the final whistle, he said: “It feels brilliant, absolutely brilliant. I am really proud of the players and the club because you could feel the burden of being in the league for a third season. There was a weight but now it is lifted.

“Another season in this division would have been really damaging but we can look forward now. We have good players and we are getting great crowds and they have won two trophies in a year, with the chance of another one. We are back where I think Hibs belong and we don’t want to be in this division again. It is a Premiership team. That is why I came here.

“The potential was there and when you see 150,000 people on Princes Street you know that there is a support to tap into. I hope they stay with us next year because we are not going to probably be challenging for the league title but we will be competing at a high level and that is good for the supporters, to get a taste of Premiership football again. This club deserves it.

“We have a healthy squad and some talent coming through from the development team.”