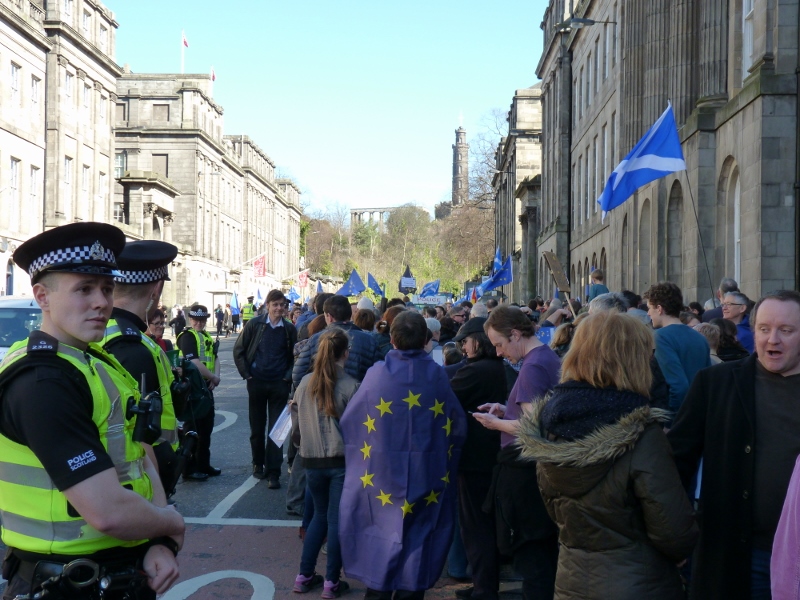 My part in this “historic” week was pretty minor.  But I did stand for a few moments with the pro-EU marchers as they set off for the Scottish Parliament to make the point that we don’t all see this Brexit malarkey as a great new beginning.

Theresa May has been painting an almost Elizabethan picture of brave little England setting out to conquer the seven seas, winning trade deals, releasing the entrepreneurial  energy of her people and sharing her new found wealth more equally.  This isn’t how we see it in the 62 per cent of Scotland which voted against leaving the European Union.  We think it’s all going to end in tears.

You might wonder, for instance, why we haven’t been winning Mrs May’s magnificent trade deals already? And how does she propose to win such deals by walking out on the biggest trade deal we’ve ever known ?  What’s the point in leaving the EU if you are hoping to have the “closest possible” trading relationship with Europe ?  But hey ho, the people have spoken and we must go through this exercise in re-inventing the wheel.  Unless we can think of a way out…like a parliamentary vote against, or a general election or another referendum.

For me, the saddest aspect of this doleful affair is that we are abandoning the European project which Winston Churchill set out for us in his Zurich speech in 1946, a federal “United States of Europe” where all citizens can live in peace, safety and freedom. I have the audacity to think that Britain had a lot to offer the rest of Europe, being the oldest and strongest democracy and being keen on devolution and honest dealing.

So it’s not been a quiet week in Lake Wobegon.  The Brexit letter has been signed and sent. The Great Repeal Bill has been published which will transfer the legal powers currently with the EU into English and Scottish law. Nicola Sturgeon suspects there will be “a power grab” by Westminster along the way.  And the Scottish Parliament has voted by 69 to 59 to request a second referendum on independence, once the terms of Brexit are known in the autumn of 2018 or the spring of 2019.    Mrs May has stuck to her non-sequitur of “Now is not the time” and her Scottish Secretary David Mundell has hinted that might mean “2019 is not the time either.”

By then we may be back to “It’s Scotland’s Oil” and the road to independence will be paved with golden euros.  This week a huge new oil field was discovered west of Shetland.  Hurricane Energy announced it had stuck oil in two of its drill holes, 19 miles apart, and that there may be a billion barrels of oil waiting to be pumped out when the price is right.  It’s the largest oil field so far unexploited on the UK continental shelf.

At the other end of the energy mix, Berwickshire Housing Association has become the first in Scotland to build a windfarm to raise money to build new affordable homes.  The three-turbine wind farm at Hoprigshiels near Cockburnspath will sell power to the national grid and bring in an estimated £1m a year over the next 25 years. The funds will then be used to build new homes throughout Berwickshire. A win-win-wind situation.

Not so win-win winds have caused further delays to the construction of the new bridge over the Firth of Forth.  The infrastructure minister Keith Brown was forced to announce to parliament that the bridge will not be open to traffic in May as planned but will be delayed until at least August. He said high winds had prevented the dismantling of the giant cranes which have been lifting the sections into place.  It means the five-year project will be eight months late but it is still within its budget of £1.35bn.

It was however a win-win situation last weekend at Hampden Park when Scotland beat Slovenia 1-0 in our latest qualification game for the World Cup. As usual it was all nerve-testing stuff. The winning goal came in the 88th minute, scored by Chris Martin who was jeered by fans as he came on as a substitute just a few minutes before.  Scotland now face England on 10th June.

Meanwhile, spring has arrived. Our clocks have moved forward, the weather has turned mild and I’m waiting to see my first swallow.  Out in the wildlife reserve in East Lothian where I work on Fridays, we’ve heard our first skylarks, song-thrushes, and wood-peckers.  The magpies here in my garden in Edinburgh are busy building their nests.

And the results of the RSPB’s Big Garden Birdwatch are in.  35,000 Scots took part in the exercise back in January and, predictably, house-sparrows came out as the most common garden bird, followed by starlings, chaffinches, blackbirds and blue tits.  In the hour standing at my window, I only saw my two magpies.

But, as I say, my part in history is usually pretty minor.